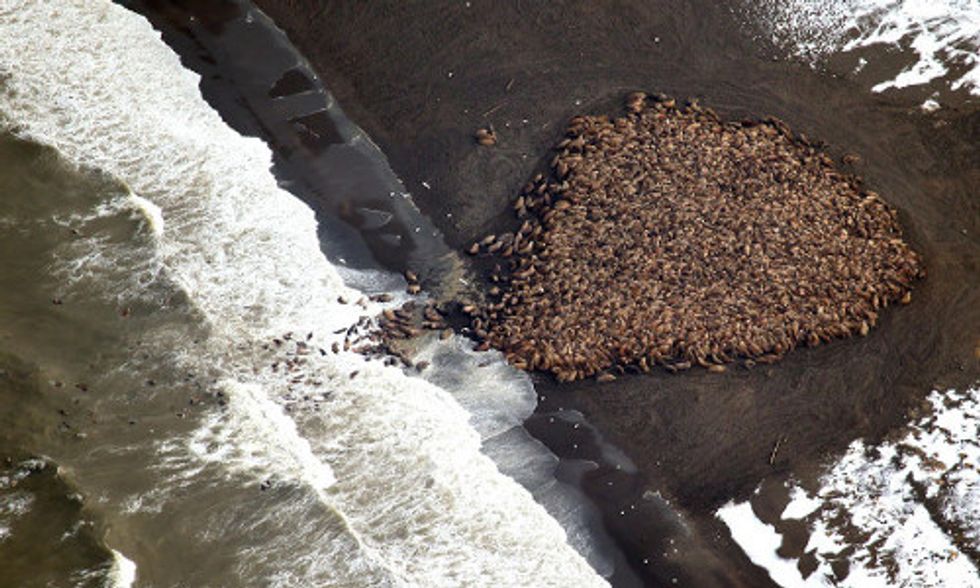 With Arctic sea ice coverage at its sixth lowest level recorded since 1978, Pacific walruses, dependent on ice surfaces for breeding and hunting, are coming ashore to find to find resting places.

Walruses cluster on a beach near Port Lay in northwest Alaska, unable to hunt for food at sea at ice melts. Photo credit: National Oceanic and Atmospheric Administration

Record numbers of the walruses—a estimated 35,000—were spotted on a beach in northwest Alaska 700 miles northwest of Anchorage, according to the National Oceanic and Atmospheric Administration (NOAA). The assessment was part of the agency's annual arctic marine mammal aerial survey, which produced stunning photos of the walruses piled on the beach.

Summer temperatures cause the edge of the sea ice to recede north. Mothers and newborn babies ride the sea ice north, depending on the shallow water of the Chukchi Sea for feeding. But when the ice recedes as much as it did this year, they find themselves in waters too deep for them to dive to the bottom to hunt.

"The massive concentration of walruses onshore—when they should be scattered broadly in ice-covered waters—is just one example of the impacts of climate change on the distribution of marine species in the Arctic,” said Margaret Williams, managing director of the Arctic program at the World Wildlife Fund (WFF). “The sharp decline of Arctic sea ice over the last decade means major changes for wildlife and communities alike. Today’s news about the sea ice minimum is yet another reminder of the urgent need to ratchet down global greenhouse gas emissions—the main human factor driving massive climate change.”

This isn't the first such cluster of walruses on land in Alaska. They were first spotted in 2007, then again in 2009 and 2011, when an estimated 30,000 walruses appeared near the same beach where they were spotted this year. When clustered so closely, young walruses are vulnerable to stampedes caused by hunters, polar bears or airplanes. Last week, observers spotted about 50 carcasses of animals they think may have been killed in a stampede.

The walruses are also onshore across the strait in Russia, reports the WFF.  About 10,000 walruses have come ashore at Cape Schmidt in Chukotka, Russia, reports RIA Novosti World Wildlife Fund (WWF) Russia “polar bear patrol” project leader Viktor Nikiforov. There the walruses have taken over the entire eastern shore of the cape and started to scramble up the cliffs.

“The dramatic picture of walruses massing onshore is worth a thousand charts and graphs, reminding us that climate change is profoundly disrupting life on an epic scale in the fragile Arctic,” said Lou Leonard, vice president of climate change programs for WWF.