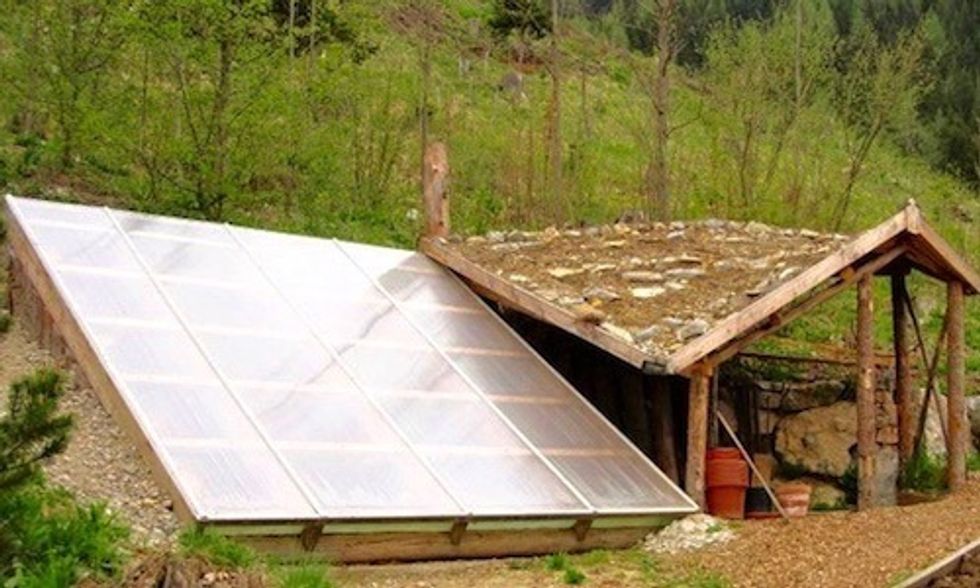 From vertical farms to solar-powered "farms from a box," we've seen how farming technology has grown leaps and bounds in recent years. But for those who prefer something a little more rustic, growing food from a hole in the ground is as low-tech as you can get.

A walipini, meaning "place of warmth" from the Amaraya Indian language, is an underground greenhouse with a transparent (usually plastic) covering that stays warm by passively soaking up the sun's heat and absorbing the earth's thermal energy.

Fruits and vegetables can be grown year-round, making it ideal for communities in colder locations that can't usually grow their own fresh and local produce during certain parts of the year.

The farming method isn't exactly new. Walipinis have been used in South and Central America for decades, including one that can grow bananas at 14,000 feet in the Andes.

The technique was notably adopted by The Benson Institute, a worldwide food security program of the Mormon church. According to The Plaid Zebra, the Benson Institute and its team of volunteers built a community-sized 74-feet-by-20-feet walipini in La Paz, Bolivia for around a mere $300.

The institute published a DIY manual on how to build such a structure. It explains:

The Walipini, in simplest terms, is a rectangular hole in the ground 6 to 8 feet deep covered by plastic sheeting. The longest area of the rectangle faces the winter sun—to the north in the Southern Hemisphere and to the south in the Northern Hemisphere. A thick wall of rammed earth at the back of the building and a much lower wall at the front provide the needed angle for the plastic sheet roof. This roof seals the hole, provides an insulating airspace between the two layers of plastic (a sheet on the top and another on the bottom of the roof/poles) and allows the suns rays to penetrate creating a warm, stable environment for plant growth.

Minneapolis-based Seasons Unity Project builds walipinis and says these structures can be constructed in places with surface temperatures as cold as -10 degrees Fahrenheit and as few as four feet below ground level.

The walipini can be a low-cost and effective year-round greenhouse.
Photo credit: Flickr

"Of course, many climates are too harsh for growing healthy vegetables, fruits, and herbs outside year-round. Rather than stopping at the apparent challenge or obstacle... [the structure] allows its caretaker to harvest, store, and deliver energy without generation or requirement of external energy or active energy input," the Seasons Unity Project said.

This 4-minute clip features a farmer from the Comanche community in Bolivia. He explains how a walipini helps grow crops, such as potatoes and quinoa, even during the frosty and rainy winter from December to February.

"It’s a new system for us. We can rescue the heat, and with that heat we can make a good production and we also save water," he says. "With a walipini...we can produce not only fodder (for animals), we can produce food for all the people who live here."

A walipini is also great for places like The Netherlands, which also cold weather spells. A volunteer farming group there called Creative Garden Wageningen is working on its own walipini, dubbed the Sunken Greenhouse that will house lemons, strawberries, peppers, and a variety of beans and herbs, as you can see in the video below.

Impressively, the structure's inside beam is a living willow tree. Additionally, the grounds outside have plots for plants such as beans, pumpkins, onions and more. The roof covering was made with donated landfill plastic.

“We made it ourselves for very little if no money at all using leftover and donated materials,” uploader Ben Green wrote.

He added that their walipini now has a reciprocal roof, "one of the few in the world to have such a roof."

Interested in building your own underground greenhouse? Here are 5 things you should know: