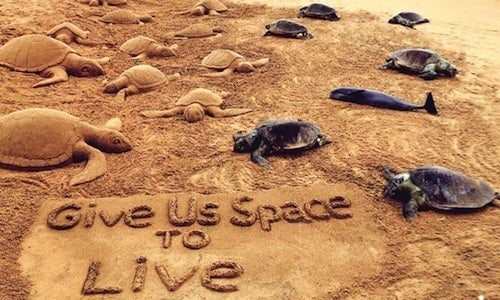 As many as 300 olive ridley sea turtles and a bottlenose dolphin were found dead on Puri Beach in Odisha, India on Wednesday. While the exact cause of this horrific mass death is currently unclear, according to reports, the turtles might have been killed after being hit by trawlers who were operating illegally in the sea.

It’s not unusual for turtles to wash up dead on Puri beach during winter, but this is the first time so many turtles have perished, The Times of India reported.

According to the report, forest and marine fisheries authorities seized two trawlers for carrying out unauthorized fishing despite a ban that prohibits trawling between November and May.

“This is unfortunate that a large number of olive ridley turtles died on the beach. It seemed they were hit by trawlers,” Puri Collector Arabind Agarwal said.

The turtles, named after their olive-colored shell, are listed as “vulnerable” by the World Wildlife Fund because “they nest in a very small number of places, and therefore, any disturbance to even one nest beach could have huge repercussions on the entire population.”

Jagannath Bastia, president of the volunteer organization Beach Protection Council of Odisha, told The Times of India that “trawlers continued to carry out illegal fishing during the ban period due to poor patrolling by marine police and forest authorities.”

Renowned sand artist Sudarsan Pattnaik created sand sculptures of turtles and sculpted the message “Give Us Space To Live” on the beach to bring attention to the incident.

“I felt sad to see these turtles and never saw such a huge number of dead turtles on Puri beach,” Pattnaik said. “I appeal to the government through my sand sculpture to find out the cause of death of turtles and take measures for their protection.”

It’s clear from this story that humans can have a profoundly negative impact on ocean life. Earlier this month, an adult female orca named Lulu was found dead on the Scottish island of Tiree with deep lesions on her body. After a necropsy was performed, experts with the Scottish Marine Animal Strandings Scheme concluded that Lulu had been “chronically entangled” in abandoned fishing gear for several days and likely drowned from entanglement.

Plastic pollution is another devastating culprit. The Ellen MacArthur Foundation warned in a report published Tuesday that there will be more plastic than fish in the ocean by 2050. Besides turtles, plastic litter harms the entire ocean chain, from whales, to fish and even plankton as larger pieces of plastic break down into microscopic pieces.

Last December, a team of researchers came across an olive ridley sea turtle with a 5-inch plastic fork lodged deeply in its nostril on a beach in Costa Rica. Luckily, the turtle was saved.