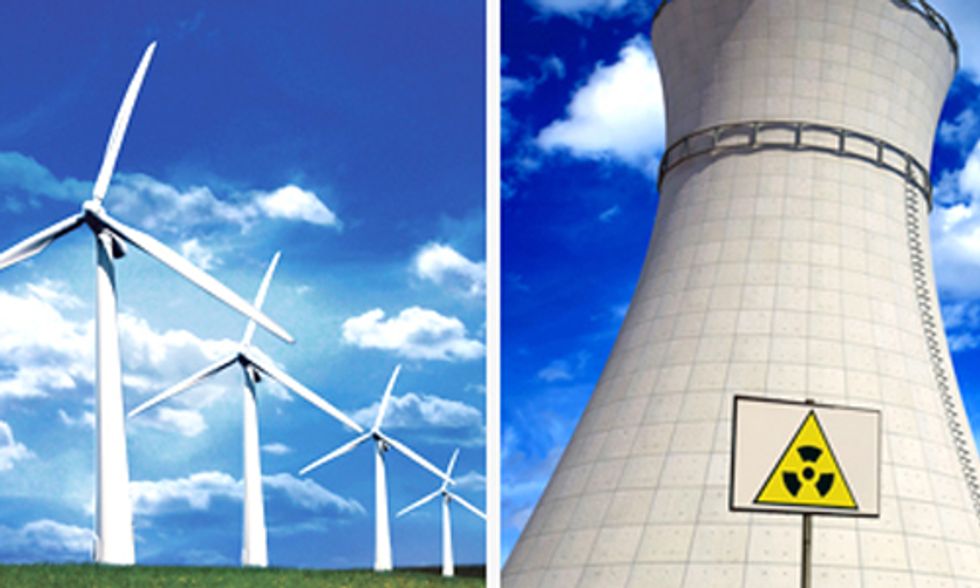 A total of 311 U.S. and international environmental and clean energy groups said yesterday that, while they respect the climate change work of Dr. James Hansen and three of his academic colleagues, they take strong exception to the notion that nuclear power is the solution to global warming.

Instead of embracing nuclear power, we request that you join us in supporting an electric grid dominated by energy efficiency, renewable, distributed power and storage technologies.

The joint letter from more than 300 groups—including 237 from 46 U.S. states and the District of Columbia and 74 from 44 other nations around the globe, including those on the ground dealing with the aftermath of the Fukushima nuclear reactor disaster—is being issued in response to a Nov. 3, 2013 statement from Dr. James Hansen and three of his academic colleagues, Ken Caldeira, Kerry Emanuel and Tom Wigley. In that statement Hansen and the others voiced their advocacy for nuclear power, an industry plagued by financial, technical and safety issues for more than 50 years.

In yesterday's statement organized by the Civil Society Institute (CSI) and the Nuclear Information and Resource Service (NIRS), 311 organizations are urging Dr. Hansen and his colleagues to publicly debate the question of climate change and nuclear power.

The statement reads in part:

Instead of embracing nuclear power, we request that you join us in supporting an electric grid dominated by energy efficiency, renewable, distributed power and storage technologies. We ask you to join us in supporting the phase-out of nuclear power as Germany and other countries are pursuing. It is simply not feasible for nuclear power to be a part of a sustainable, safe and affordable future for humankind. We would be pleased to meet with you directly to further discuss these issues, to bring the relevant research on renewable energy and grid integration to a dialog with you. Again, we thank you for your service and contribution to our country's understanding about climate change.

The full text of yesterday's statement is available online.

"We can admire the important work of Dr. Hansen on climate change, which is his area of expertise, while disagreeing with his advocacy of nuclear power," said CSI Senior Energy Analyst Grant Smith. "In the face of a clear need for swift action on climate change, there is nothing about nuclear power that resembles a solution that can be put into place quickly, much less in a safe and affordable fashion.

"Indeed, Dr. Hansen and his colleagues tout so-called 'advanced' nuclear technology, which is nothing more than regurgitated attempts by the industry to bring tried-and-failed alternative designs such as expensive and dangerous breeder reactors to commercialization. We have clean, affordable, safe, reliable and proven solutions available to us. These safe and clean sources can be brought to scale creating an electric grid that relies much more heavily on increased energy efficiency, variable wind and solar photovoltaic (PV), distributed power, demand response and storage technologies. This energy path can reduce greenhouse gas emissions much more quickly, cost-effectively and safely than any nuclear option. The markets are responding and there is clear evidence that they are catalyzing an unprecedented technological revolution in the power sector."

"What we are saying is that Dr. Hansen has things exactly half right: We need to take action now to mitigate climate change," said NIRS President Michael Mariotte. "Where we are taking issue is with the other half: the mistaken idea that nuclear power is some kind of panacea for all that ails our climate. In fact, nuclear power is the slowest, most expensive, and most dangerous climate 'solution' available. Our sincere hope is that Dr. Hansen will heed the input of literally hundreds of knowledgeable energy and environmental groups around the world. The joint letter puts it best with these words: 'It is simply not feasible for nuclear power to be a part of a sustainable, safe and affordable future for humankind.'"

The Jan. 8 statement from the more than 300 signers reads in part:

Nuclear power is not a financially viable option. Since its inception it has required taxpayer subsidies and publicly financed indemnity against accidents. New construction requires billions in public subsidies to attract private capital and, once under construction, severe cost overruns are all but inevitable. As for operational safety, the history of nuclear power plants in the U.S. is fraught with near misses, as documented by the Union of Concerned Scientists, and creates another financial and safety quagmire—high-level nuclear waste. Internationally, we've experienced two catastrophic accidents for a technology deemed to be virtually 'fail safe'.

As for 'advanced' nuclear designs endorsed in your letter, they have been tried and failed or are mere blueprints without realistic hope, in the near term, if ever, to be commercialized. The promise and potential impact you lend breeder reactor technology in your letter is misplaced. Globally, $100 billion over sixty years have been squandered to bring the technology to commercialization without success. The liquid sodium-based cooling system is highly dangerous as proven in Japan and the U.S. And the technology has proven to be highly unreliable.

Equally detrimental in cost and environmental impact is reprocessing of nuclear waste. In France, the poster child for nuclear energy, reprocessing results in a marginal increase in energetic use of uranium while largely increasing the volume of all levels of radioactive waste. Indeed, the process generates large volumes of radioactive liquid waste annually that is dumped into the English Channel and has increased electric costs to consumers significantly. Not to mention the well-recognized proliferation risks of adopting a plutonium-based energy system.

As to the issue of what represents the best path forward to deal with climate change, the Jan. 8 statement notes:

We disagree with your assessment of renewable power and energy efficiency. They can and are being brought to scale globally. Moreover, they can be deployed much more quickly than nuclear power. For instance, in the U.S. from 2002 to 2012 over 50,000 megawatts of wind were deployed. Not one megawatt of power from new nuclear reactors was deployed, despite subsidies estimated to be worth more than the value of the power new reactors would have produced. Similarly, it took 40 years globally to deploy 50,000 megawatts of solar PV and, recently, only two and a half years to deploy an equal amount. By some estimates, another 100,000 MW will be built by the end of 2015. Already, renewables and distributed power have overtaken nuclear power in terms of megawatt hour generation worldwide.

The fact of the matter is, many Wall Street analysts predict that solar PV and wind will have reached grid parity by the end of the decade. Wind in certain parts of the Midwest is already cheaper than natural gas on the wholesale level. Energy efficiency continues to outperform all technologies on a cost basis. While the cost of these technologies continues to decline and enjoy further technological advancement, the cost of nuclear power continues to increase and construction timeframes remain excessive. And we emphasize again that no technological breakthrough to reduce its costs or enhance its operation will occur in the foreseeable future.