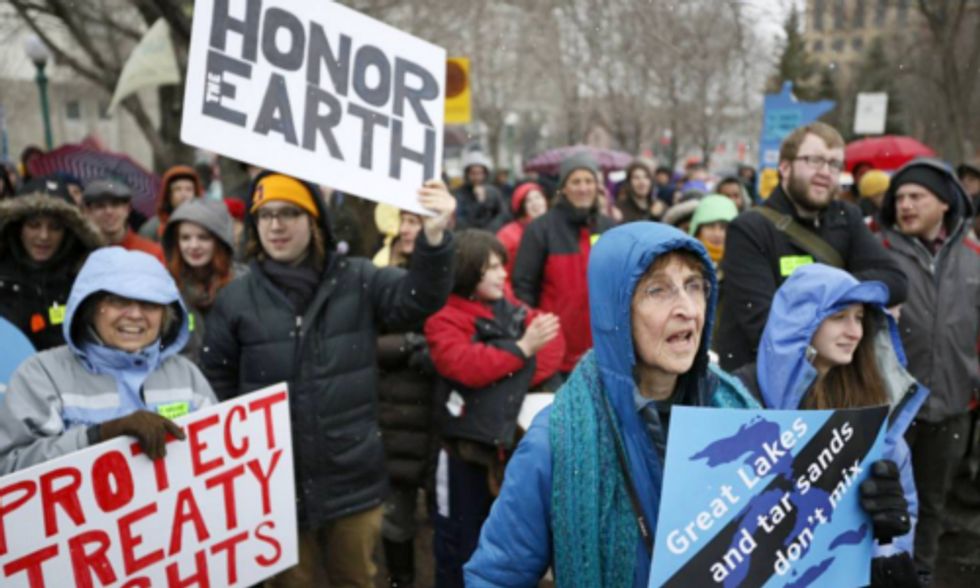 The sky was gray, the temp was just below freezing, the wind was whistling and sleet was pelting down on Kellogg Park in downtown St. Paul, MN, last week …

… but that wasn’t enough to stop more than 300 of us from across the Midwest who came to rally and march against the proposed expansion of the Alberta Clipper tar sands pipeline. With songs, speeches and buoyant enthusiasm, we gathered to say "No" to tar sands expansion and "Yes" to a future free of carbon emissions and oil spills.

The Alberta Clipper is an existing Enbridge pipeline that runs from Hardisty, Alberta to Superior, WI, across much of northern Minnesota. Built in 2010 to carry tar sands oil, it is currently under consideration for expansion from its present 450,000 barrels per day (bpd) to 800,000 bpd, which would make it almost as large as Keystone XL. Expanding it would be a similar disaster for the climate and would increase the risk of spills into the Mississippi River and Lake Superior.

We’re opposing the expansion at the state level right now in Minnesota through a contested case hearing process at the Minnesota Public Utilities Commission, which is very much like putting the pipeline on trial: there’s a judge and both sides get to make their arguments. The contested case also ensures there are public hearings where anyone can give testimony. It’s an almost-all-volunteer effort—while we have a lawyer, his funds were raised primarily by volunteers who wanted to make sure we had a voice in the process.

We gathered in St. Paul last Thursday from all across the region so we could show up in force to the final public hearing. We marched through downtown to the Public Utilities Commission, led by a group of drummers and a giant paper maché pipeline, turning heads and bringing officeworkers to windows to look down at us.

The PUC hearing was packed, which was the best and worst part of the day because it made a huge impression and they were so unprepared for the crowd. The official police count was 1,000 people (many of our supporters had gone directly to the hearing so they could sign up and testify early, and there were also some pipeline contractors who came to testify in favor of the expansion). Only about 200 people could fit into the hearing room and official overflow room combined.

We brought our big rally sound system indoors and jury-rigged a set of extension speakers in an empty room so more people could listen, but the crowds were still overflowing. I wish more people had been able to actually be part of the hearing, but it was fabulous to see all the interest. One of the officials at the hearing said she’d never seen anything else like this.