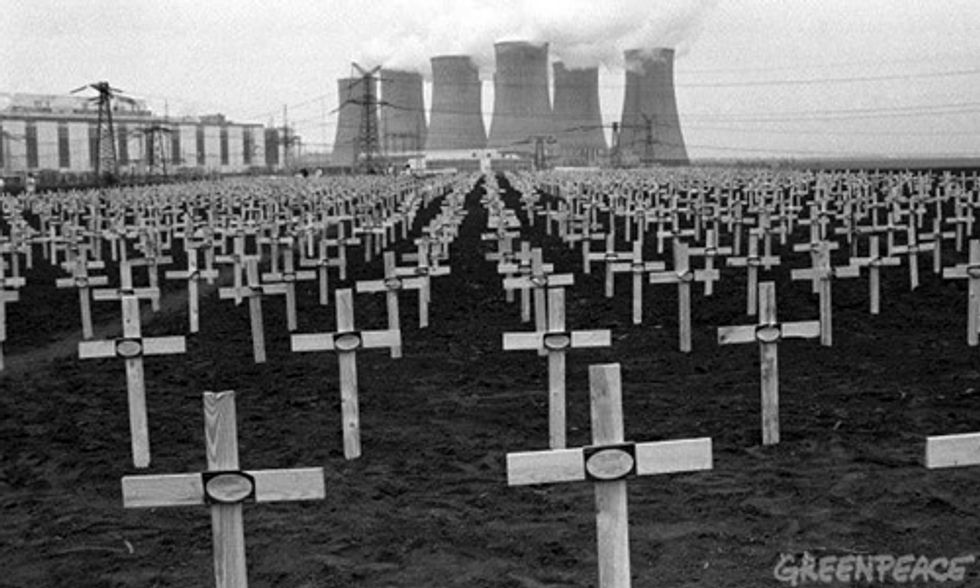 April 26 marks the 30th anniversary of the catastrophic explosion at the Chernobyl nuclear power plant.

It comes as Germany, which is phasing out all its reactors, has asked Belgium to shut two of its nukes because of the threat of terrorism.

It also comes as advancing efficiencies and plunging prices in renewable energy remind us that nukes stand in the way of solving our climate crisis.

Greenpeace action at the Bohunice nuclear power plant in Czechoslovakia, near the Austrian border. Activists erected 5,000 wooden crosses on April 25, 1991 to commemorate the fifth anniversary of the Chernobyl disaster, and appealed to the Czech government to close the outdated Soviet-built plant. Photo credit: © Greenpeace / Veronika Leitinger

And it makes us remember the second and third biggest lies told us by the atomic power industry: that no commercial nuke could explode, and that no one would be harmed by reactor fallout.

Prior to the 1986 disaster at Chernobyl, there was at least one minor explosion (on March 28, 1979) at Three Mile Island (TMI) in Pennsylvania. Thankfully, TMI Unit 2's containment dome was uniquely solid. The site is in the flight path of the Harrisburg airport. Citizen activists had demanded Unit 2's containment be able to withstand a jet crash. So they forced construction upgrades that may have saved millions of lives when the reactor was stretched to its limits.

TMI's owners long denied there was a melt-down at all. But robot cameras later showed otherwise. The industry still denies anyone was harmed by TMI's fallout. But the Pennsylvania Department of Agriculture and the Baltimore News-American reported that downwind farm and wild animals died in horrifying droves. Parallel reports by researcher Tim Mousseau are now coming from areas downwind from Chernobyl.

Recent studies by nuclear engineer Arnie Gundersen indicate TMI2's containment may have cracked, releasing far more radiation than generally suspected. Even now, nobody knows exactly how much did escape, what it consisted of, where it went or who was impacted. TMI's owners have quietly paid at least $15 million in damages to downwinder families, including at least some payments for Down's Syndrome.

By 1979 new reactor orders had already stopped due to the industry's horrific inefficiencies, bad economics and lack of answers for decommissioning and radioactive waste storage. The industry's biggest lie—that atomic power would be “too cheap to meter"—was already obvious.

But when Chernobyl blew up 30 years ago, it exposed lies number 2 and number 3: that a commercial reactor could not explode and that the industry's radiation would kill no one.

Here's a short list of 30 ways these two tragic flaws are killing us all. They are discussed with experts Joe Mangano and Dr. Janette Sherman on my recent Solartopia show.

1. According to studies by three top European scientists, first published in 2009, more than 985,000 people have died from Chernobyl's fallout.

2. Impactful radioactive contamination is still in evidence in soil throughout Ukraine, Belarus and as far away as Scotland.

3. By some estimates, children born throughout regions downwind of Chernobyl have suffered radiation-related diseases at rates affecting up to 80 percent of those born in critical areas.

4. Reindeer, sheep and other animals across northern Europe are still too heavily contaminated to be safely consumed.

5. Radioactive fallout from Chernobyl hit northern California within 10 days of the explosion, followed by a 60 percent drop in bird births recorded at the Pt. Reyes sanctuary north of San Francisco.

6. Epidemiological studies by Mangano, Sherman and others show that nearby infant death rates rise when commercial reactors open, and drop when they shut.

7. Epidemiological studies show direct links between reactor operations and cancer rates downwind, including a 70 percent excess of thyroid cancer in the four counties surrounding New York's Indian Point reactors as opposed to the nation as a whole.

8. When Chernobyl blew up, industry apologists emphasized that such a disaster at a Soviet reactor had nothing to do with American nukes. But on March 11, 2011, four General Electric reactors exploded at Fukushima (three melted, and their cores have yet to be found).

9. The explosions at Fukushima by estimates of at least one Japanese scientist have spewed at least 30 times as much Cesium 137 as was released by the atomic bombs at Hiroshima and Nagasaki.

10. The Fukushima disaster still dumps at least 300 tons of radioactive water into the Pacific Ocean every day.

11. Thousands of tons of contaminated water are being held in flimsy storage tanks at Fukushima, at least some of which are likely to give way; serious leaks of radioactive water are also on-going at Indian Point, Florida's Turkey Point, numerous other commercial reactor sites and at the Hanford (Washington) military reservation.

12. The Japanese government and Fukushima's owner (Tepco) are hinting strongly they would like to dump still more thousands of tons of radioactive water directly into the Pacific.

13. At least 7,000 clean-up workers are still being exposed to radiation at Fukushima every day.

14. It remains unclear exactly where the cores from Units 1, 2 and 3 might be, what can be done to contain them and exactly what kinds of long-term dangers they pose.

15. Thyroid abnormalities among children in the Fukushima area are far beyond normal.

16. Physicians for Social Responsibility predicts at least 68,000 downwinders will die from Fukushima's fallout. Dr. Chris Busby estimates additional cancers alone at more than 400,000. Arnie Gundersen estimates the ultimate toll on par with Chernobyl, of up to 1,000,000.

17. Radioactive hot spots clearly linked to Fukushima are being found throughout Japan, some as far away as Tokyo.

18. Japanese activists have kept all but three of Japan's 54 reactors shut since Fukushima, but the pro-nuke Abe regime wants to stage some 2020 Olympic events near the stricken reactor site.

20. Though the explosions at Fukushima have been linked to the tsunami that wiped out back-up generations, primary damage (especially at Unit 1) was caused by an earthquake whose epicenter was 120 kilometers distant, far further than many fault-lines near scores of other reactors around the world.

22. Among many others, reactors at Diablo Canyon, California and Indian Point, New York, are very near major fault lines, with the potential death tolls in downwind Los Angeles and New York City stretching into the millions.

23. Dr. Michael Peck, resident Nuclear Regulatory Commission (NRC) safety inspector at California's Diablo Canyon has warned that the two huge reactors there cannot withstand a likely earthquake delivered by any of the dozen seismic faultiness surround the site. Peck filed his report within the NRC but it was made public a year later by Friends of the Earth and other community groups. The NRC has dismissed Peck's warnings and he has been moved to the Commission's Chattanooga office.

24. As terrorists slaughtered innocent civilians in Brussels, the New York Times reported that Belgian authorities evacuated two reactors which they felt were vulnerable to attack. As mentioned above, Germany has now asked Belgium to shut these nukes down.

25. A wide range of reports dating back at least to the 1970s have confirmed that throughout the entire global nuclear industry, commercial reactors simply cannot be guaranteed to be safe from a concerted terrorist attack, making them all what Karl Grossman has called “pre-deployed weapons of mass destruction."

26. The technological basis for the 99 U.S. reactors now operating dates far back in the previous century, as the average age of an operating U.S. nuke American reactor is now roughly 35 years old, with Davis-Besse (near Toledo, Ohio) distinguished primarily by four major cuts into its containment dome, and a shield building that is literally crumbling.

27. Since Fukushima on March 11, 2011 significant safety advances advocated by the staff of the NRC and others have not been installed at U.S. nukes despite widespread warning of defects.

28. Seven top NRC engineers took the rare and daring step of filing a public 2.206 petition warning that 98 of 99 current US reactors have serious basic flaws in the electrical sector of their emergency core cooling systems, which are designed to protect the public from a major catastrophe.

29. Former NRC expert David Lochbaum, now with the Union of Concerned Scientists, has warned that the inspectors' findings on the faulty cooling system wiring are quite serious, and could have been solved easily and cheaply several years ago, when they were first discovered.

30. The corrupt regulatory culture of the NRC is now in the process of re-licensing every American reactor, with projected lifetimes stretching to 60 years, two decades beyond original design capacity, guaranteeing that America's 99 remaining reactors will continue to dangerously decay, putting us all in harm's way. All the relicensing has proceeded without a requirement that the industry get private insurance, which is still unavailable after more than a half-century of operations.

There is much much more. The on-going radiation releases from these jalopy reactors impact our health and undermine our eco-systems every day, threatening our future on this planet, and standing in the way of the Solartopian Revolution in renewables and efficiency that must ultimately save our planet from ecological and economic ruin.

Harvey Wasserman's Organic Spiral of U.S. History will be published soon on www.solartopia.org. He edits www.nukefree.org and wrote Solartopia! Our Green-Powered Earth.

15 Things You Didn't Know About Chernobyl