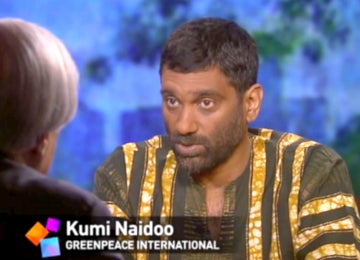 Twenty-eight Greenpeace International activists and two journalists are being detained in Russia after a peaceful action protesting Gazprom’s offshore oil drilling in the fragile ecosystem of the Arctic. The activists have been held by authorities for 10 days since the Greenpeace ship Actic Sunrise was illegally boarded by armed guards in international waters on Sept. 19. Greenpeace has pledged to appeal all detentions.

Greenpeace International Director Kumi Naidoo appeared on this week’s Moyers & Company, speaking with Bill Moyers about the urgency of environmental action and the politics of climate change.

“If there’s injustice in the world, those of us that have the ability to witness it and to record it, document it and tell the world what is happening have a moral responsibility to do that,” Naidoo told Moyers. “Then, of course, it’s left up to those that are receiving that knowledge to make the moral choice about whether they want to stand up against the injustice or observe it.”

More than 640,000 people have written to Russian embassies around the world since the ship was seized calling for the release of the Arctic 30,  according to Greenpeace, including Nobel Peace Prize winner Adolfo Pérez Esquivel, Amnesty International, Human Rights Watch and actor Ewan McGregor.

Follow updates on this story at Greenpeace International’s timeline of events.