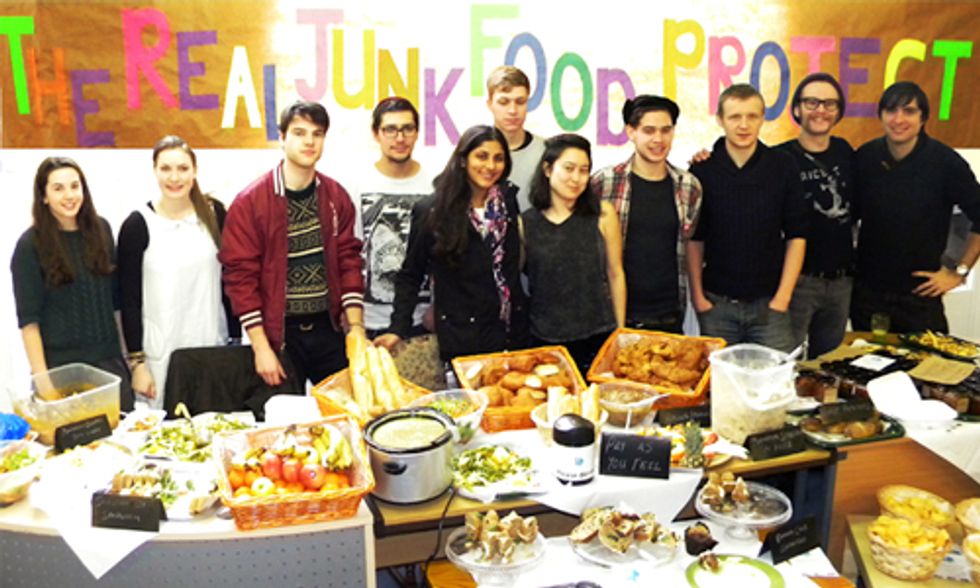 Food waste is a serious problem. An estimated 30-50 percent of food is wasted globally. Grassroots organizations such as Food Recovery Network have been working on the issues on college campuses across the U.S. with great success. The issue is getting even more attention from renowned chefs, such as Dan Barber whose trendy locally-inspired restaurant in Manhattan will transform into a food-waste focused pop-up for two weeks in March.

Across the pond, Adam Smith, a chef, and Sam Joseph and Conor Walsh, two university students, are tackling food waste in the UK. Their effort, The Real Junk Food Project, created a "Pay As You Feel" (PAYF) cafe, which asks customers to pay what they see fit for perfectly good food that, due to strict food labeling laws, would have otherwise been thrown out.

Between his time on a farm in Australia and working in restaurants in the UK, Smith was tired of seeing all this perfectly good food go to waste. He recruited his two friends, Joseph and Walsh, who were distraught by all of the food waste in the supermarkets they worked for. They couldn't believe that so much perfectly good food—about 1.4 billion tons globally per year—was going to waste while a billion people around the world live in food poverty.

With the goal to cut out food waste and feed the hungry, the three young entrepreneurs started the first PAYF cafe in the UK city of Leeds in December 2013. The idea caught on in the rest of the UK with more than 40 cafes selling surplus food on a PAYF basis. In the last year the cafe in Leeds has diverted about 22 tons of food from the landfill and fed 10,000 people.

"For me this feels like the right thing to do, and it feels like it's common sense," says Smith. "And I feel like common sense is missing from most of these regulations and laws. And that's the reason why we're in such a mess socially and environmentally as well."

The "Pay As You Feel" cafe model asks customers to pay what they see fit for perfectly good food that would have otherwise been thrown out.

Little Less Known, an organization that spotlights "some of the best independent businesses, innovative ideas and inspiring people," featured the project on their site in December. At the time, the cafe was on the brink of closure. The food they recover is free and the cafe is run entirely by volunteers, but the cafe was still not covering its operating costs.

When Little Less Known followed up with The Real Junk Food Project last week, things were looking much better. Not only did Smith succeed in raising the funds to keep the cafe open, but he raised enough money to refurbish the cafe to create "the most energy efficient and sustainable building in probably the whole country," says Smith. On the day Little Less Known met up with Smith, his team had convinced their four neighboring street food vendors at a local market to adopt the PAYF concept for the day.

The project was very well received and so popular that they ran out of food by three o'clock in the afternoon. Smith's team promised to be back in an hour and went out into the city to recover more food. Smith is quick to point out that he sees the PAYF cafe model as only a stopgap solution. Ultimately, Smith believes, we needs to change regulations, as well as consumers' behaviors and expectations, so we can eliminate food waste.

Watch the video to see their success: