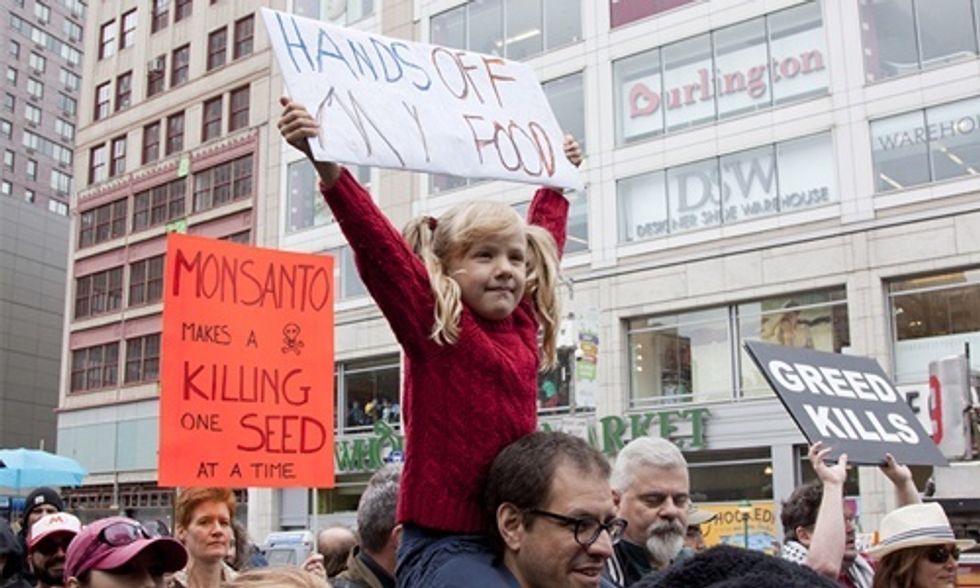 Monsanto claims that GMO farming will support farmers while fighting climate change and drought, but they are in fact a major cause of the problem. Their products are creating the very problem they seek to solve and no amount of denial or PR will hide this from the public for much longer.

Chemical farming destroys not only our environment, but ourselves and our children’s futures as well.
Photo credit: Shutterstock

GMOs are genetically engineered with DNA from foreign species, bacteria, promoters or silencers of RNA. GMO crops are nearly 90 percent engineered to resist herbicides and pesticides. More and more chemical cocktails are being sprayed on our food than ever.

These chemicals often do not dry, wash or cook off. They have not been tested for safety in conjunction with each-other and the “safety studies” presented to the regulatory agencies are paid for by the chemical companies who stand to profit from them.

When I requested a Freedom of Information Act from the U.S. Environmental Protection Agency's (EPA) studies in 2014, I was stunned to see many of the studies claimed to show safety. I can personally verify that many of these studies show serious risk of harm to life.

The EPA is in fact ignoring the harm that has been proven by these chemicals, many of which are on restricted use lists, have been deemed a probable carcinogen or are banned from other countries altogether. Hundreds of studies show serious harm from these chemicals to gut health, IQ, autoimmune disorders, mental issues and fertility. GMO crops increase the ingestion of chemicals which wreak havoc on life. This does not benefit humans. It only benefits the chemical companies who want to make a profit for their shareholders.

Secondly, GMOs are in fact contributing to world hunger. A woman named Alice from Uganda, who now lives in Australia, explained the situation happening in her father’s village back in Africa. The village is growing GMO cotton and corn PANA 4M19 using chemicals like Roundup.

Alice said, “The grounds are depleted of the nutrients. Before they would grow cotton and then grow another crop. But now, if you grow another crop immediately after growing this GMO cotton, you don't get anything out of the ground. Now the people are going hungry. There is a humongous food shortage now in the village which used to not be there. So every food you throw out, you feel so guilty because we could be feeding someone. I wish I could be there to help them, but what can I do? It is a huge, huge, problem. They used to never have food shortages at all, but now they cannot sustain themselves with the food they are growing in their gardens anymore.” When asked if she believes GMOs are feeding the world, she says emphatically, “No. No. No.”

Another recent Yale study explains the importance of soil carbon. The study described how it is leached from the Earth and how that process can be reversed which is the subject of intensifying scientific investigation, with important implications for the effort to slow the rapid rise of carbon dioxide in the atmosphere. And compared to many proposed geoengineering fixes, storing carbon in soil is simple. It’s a matter of returning carbon where it belongs. Scientists say that more carbon resides in soil than in the atmosphere and all plant life combined.

There are 2.5 trillion tons of carbon in soil, compared with 800 billion tons in the atmosphere and 560 billion tons in plant and animal life. Scientists have recently learned that organic carbon binds only to certain soil structures. The soil's capacity to absorb carbon is directly related to its health. Therefore, soil preservation and restoration needs to be incorporated into today's climate models.

It is now evident that depleted soil means an increase in the amount of carbon in the air and an escalation of climate chaos. In addition, research has shown that this depleted soil allows for fewer rain making bacteria to be released into the air.

GMO farming and toxic chemicals may in fact be contributing to drought as well. Stephanie Seneff, a senior research scientist at MIT said that few people realize that there is bacteria in the clouds collecting water vapor which could seed cloud formation. It's possible that they play an important role in moderating the world's weather. Since glyphosate is known to disrupt soil bacteria and gut bacteria, it's logical to assume it could disrupt cloud bacteria as well. This might even be an important factor in the recent California drought.

As a mother, I focus on my children’s health. The health of the soil has been far from my mind. But recently I am realizing that without healthy soil, we will not have healthy plants or healthy children. If we don’t have healthy soil we cannot sequester carbon and our chances of quelling total climate chaos are dramatically reduced. What many politicians and chemical companies fail to realize is that our environment is not just a resource, it is us. We eat, live in and breath our environment, it becomes us and we become it. Chemical farming destroys not only our environment, but ourselves and our children’s futures as well.