3 Spectacular Videos of the Calbuco Volcano Eruption in Chile 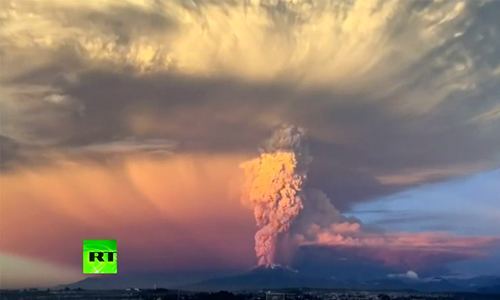 The internet is full of stunning images and videos of the eruption of Calbuco volcano in southern Chile. The 6,500-foot Calbuco erupted twice on Wednesday and again early yesterday with an unbelievable lightning storm. The volcano last erupted in 1972 and is considered one of the top three most potentially dangerous among Chile’s 90 active volcanos, according to The Weather Channel.

It’s quite a coincidence that the eruption just happened because tonight’s episode of Angry Planet features host George Kourounis descending into one of the world’s most active volcanoes. The episode addresses the false claim made by climate deniers that volcanoes contribute more greenhouse gases to the atmosphere than the burning of fossil fuels.

Volcanoes are such a cool natural phenomena! Literally, cool since they temporarily cool the atmosphere with the sulfur dioxide and other aerosols that they emit when they erupt. Our members of Congress should probably brush up on basic science.

Check out these amazing videos of the eruption:

This is a clip from Wednesday’s eruptions

And this is a video of the lava, smoke and lightning from yesterday

And here’s a time lapse video of the eruption: