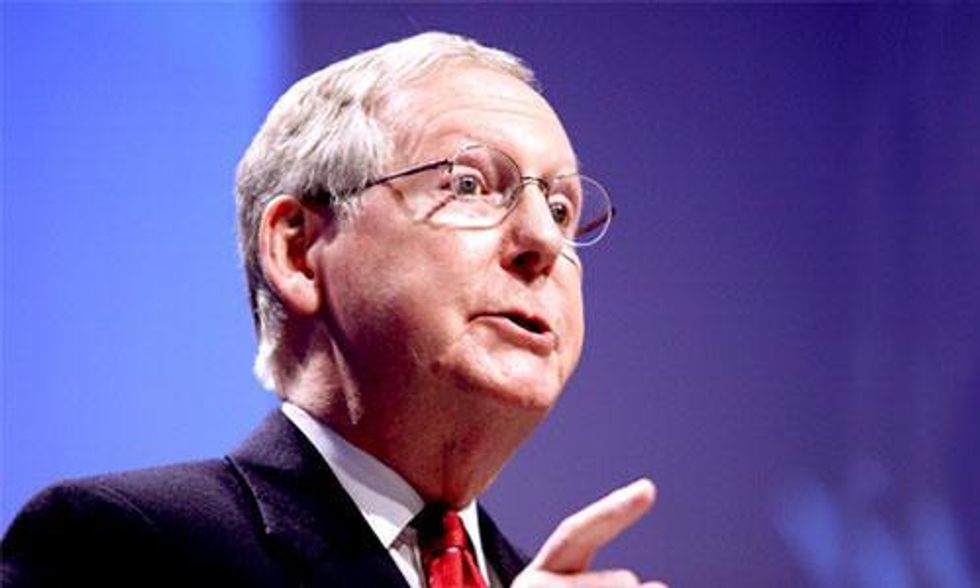 Leaders from around the world are preparing for international climate talks in Paris this December. The U.S., China, India and other nations have announced concrete plans for reducing their carbon pollution and many cities and corporations have done the same. Observers expect the talks to produce major advances in the fight against climate change.

Here at home, however, the GOP is trying to block progress at every turn.

Republican lawmakers have been saying for years America shouldn’t tackle climate change until other countries do so. Now that many countries are taking action, those same leaders are warning the rest of the world that it shouldn’t count on America.

Senate Majority Leader Mitch McConnell has warned other nations they should "proceed with caution" when negotiating climate agreements with Washington. He said the U.S. won’t honor climate commitments because he and his Republican colleagues plan to gut the Clean Power Plan—the main vehicle for delivering U.S. carbon reductions. He even sent his staff to brief foreign embassies on Republican intentions to hobble the Clean Power Plan. It is extraordinary, if not unprecedented, for a Senate leader to be undermining the credibility of the U.S. with foreign leaders; it’s also misleading. McConnell knows he has virtually no chance of reversing the Clean Power Plan with President Obama in office.

So it’s no surprise to find this obstructionism carrying over to the campaign trail. Republican contender Marco Rubio declared “America is not a planet” and doesn’t need to do anything because other nations pollute too. Gov. Chris Christie called President Obama a “weakling,” in part because he views climate action as a form of global leadership. And Donald Trump simply says, “I don’t believe in climate change.”

While Republican leaders dig in their heels, most of their voters have passed them by. Roughly half of GOP voters say they would favor a candidate who plans to address the climate challenge, according to a New York Times-Stanford poll. And nearly three-quarters of Republican voters say they support government limits on carbon pollution, a Washington Post-ABC News poll found.

Meanwhile, most U.S. states are moving ahead with the Clean Power Plan and all the world’s biggest contributors to climate change pollution have committed to reduction targets.

So if Republican denial doesn’t reflect voters’ views or facts on the ground, what does it represent? Perhaps the donors from oil and gas companies—the Koch brothers alone plan to spend $889 million on the 2016 cycle—who don’t want to rein in carbon pollution at home or abroad.

Recent developments show GOP leaders are being left behind and the rest of the nation and the world are moving into a cleaner, brighter future.

The U.S. is Not Acting Alone

Republicans like to say America can’t solve climate change by itself. The fact is it doesn’t have to. Nations that contribute 90 percent of global carbon pollution have already set reduction targets, including the U.S. and China. China will launch a nationwide cap and trade system by 2017 and increase non-fossil energy sources to 20 percent by 2030. It’s already lowering coal consumption and has twice as much solar as the U.S. Earlier this month, India committed to reducing its carbon intensity and dramatically expanding renewable energy. All around the globe, countries are taking concrete steps to cut carbon pollution right now.

The U.S. is Demonstrating Real Leadership

Other nations have taken climate action in part because America has led the way. The U.S. pledged to reduce carbon pollution by 28 percent of 2005 levels by 2025 and we are getting it done. The Obama Administration issued new fuel efficiency standards that will cut carbon pollution from new cars in half by 2025. And now the Clean Power Plan will tackle power plants—the largest source of U.S. carbon pollution. Both these measures have survived numerous GOP attacks and industry lawsuits and they will continue to move forward.

Ironically, Sen. McConnell’s efforts to undermine U.S. credibility underscore the impact of U.S. action on other countries. For years, Republicans like McConnell have ridiculed the idea that leadership by the U.S. would encourage other countries to act. But now that others are indeed following the U.S. lead, McConnell is trying to weaken foreign action by saying the U.S. won’t truly show leadership.

The Paris Agreement Will Be Different

As we get closer to an agreement in Paris, Republicans will probably claim it’s toothless and unenforceable. They will be wrong. While previous climate deals were based on vague promises and distant timetables, this one is expected to include a mechanism for strengthening national carbon reduction targets every five years. China and the U.S. made a joint announcement last month supporting this approach and calling for reporting and accountability. Many Republicans oppose international climate agreements because they will drive climate action at home. The Paris agreement will make it harder for America to follow the GOP approach of doing nothing.