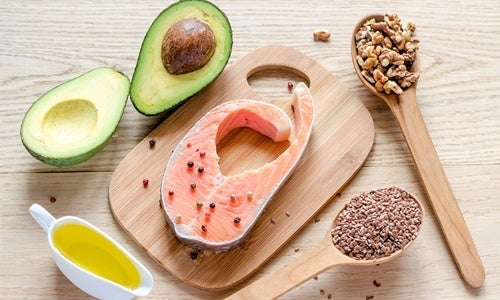 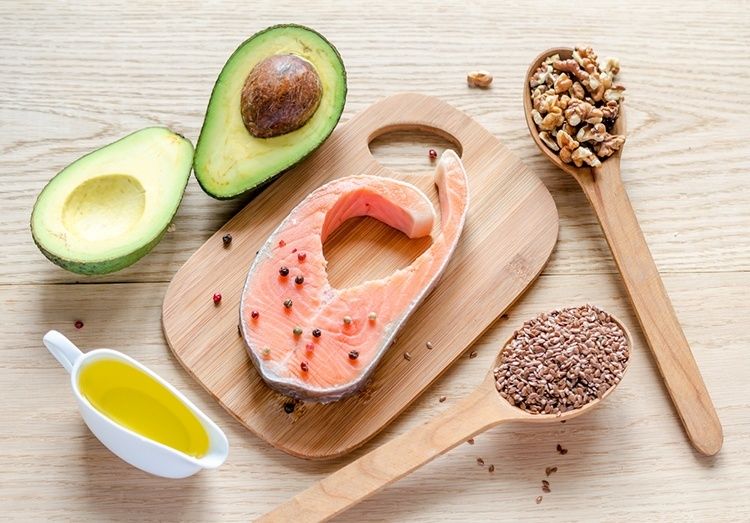 Like all fatty acids, omega-3s are chains of carbon, hydrogen and oxygen atoms.

Omega-3 fatty acids are polyunsaturated, meaning they have two or more double bonds (poly = many) in their chemical structure. Just like the omega-6s, omega-3 fatty acids cannot be made by the body and we must get them from the diet. This is why they are termed essential fatty acids.

Omega-3 fatty acids are not simply stored and used for energy. They have important roles in all sorts of bodily processes, including inflammation, heart health and brain function. Being deficient in omega-3s is associated with lower intelligence, depression, heart disease, arthritis, cancer and many other health problems (1, 2).

Omega-3 fatty acids are a group of polyunsaturated fats that we must get from the diet. They have numerous benefits for health.

ALA is short for alpha-linolenic acid. This is the most common omega-3 fatty acid in the diet. It is 18 carbons long with three double bonds.

ALA is mostly found in plant foods and needs to be converted into the EPA or DHA before it can be utilized by the human body.

However, this conversion process is inefficient in humans. Only a small percentage of ALA is converted into EPA and even less into DHA (3, 4, 5, 6).

When ALA is not converted to EPA or DHA, it remains inactive and is simply stored or used as energy, like other fats. Some observational studies have found an association between a diet rich in ALA and a reduced risk of heart disease deaths, while others have found an increased risk of prostate cancer (7).

This increase in prostate cancer risk was not associated with the other main omega-3 types, EPA and DHA, which actually had a protective effect (8).

ALA is found in many plant foods, including kale, spinach, purslane, soybeans,walnuts and many seeds such as chia, flax and hemp seeds. ALA is also found in some animal fats. Some seed oils, such as flaxseed oil and rapeseed (canola) oil are also high in ALA.

Bottom Line: ALA is short for alpha-linolenic acid. It is mostly found in plant foods and needs to be converted into EPA or DHA in order to become active in the human body.

EPA is short for eicosapentaenoic acid. It is 20 carbons long, with 5 double bonds.

For this reason, a diet high in EPA may reduce inflammation in the body. Chronic, low-level inflammation is known to drive several common diseases (10).

Several studies have shown that fish oil, which is high in EPA and DHA, may reduce symptoms of depression. There is also some evidence that EPA is superior to DHA in this regard (11, 12).

One study also found that EPA reduced the number of hot flashes experienced by menopausal women (13).

Both EPA and DHA are mostly found in seafood, including fatty fish and algae. For this reason, they are often called marine omega-3s.

EPA concentrations are highest in herring, salmon, eel, shrimp and sturgeon. Grass-fed animal products, such as dairy and meats, also contain some EPA.

Bottom Line: EPA is short for eicosapentaenoic acid. It is an omega-3 fatty acid that can reduce symptoms of depression and help fight inflammation in the body.

DHA is short for docosahexaenoic acid. It is 22 carbons long, with 6 double bonds.

DHA is an important structural component of skin and the retina in the eye (14).

DHA is absolutely vital for brain development and function in childhood, as well as brain function in adults.

Early-life DHA deficiency is associated with problems later on, such as learning disabilities, ADHD, aggressive hostility and several other disorders (16).

A decrease in DHA during aging is also associated with impaired brain function and the onset of Alzheimer’s disease (17).

DHA is also reported to have positive effects on diseases such as arthritis, high blood pressure, type 2 diabetes and some cancers (18).

The role of DHA in heart disease is also well established. It can reduce blood triglycerides and may lead to fewer harmful LDL particles (19).

DHA also causes the breakup of so called lipid rafts in membranes, making it more difficult for cancer cells to survive and for inflammation to occur (20, 21).

As mentioned before, DHA is found in high amounts in seafood, including fatty fish and algae. Grass-fed animal products also contain some DHA.

Bottom Line: DHA is short for docosahexaenoic acid. It is a long-chain omega-3 fatty acid that is very important for brain development. It may also help protect against heart disease, cancer and other health problems.

Conversion Process: From ALA to EPA to DHA

ALA, the most common omega-3 fat, needs to be converted into EPA or DHA to become “active” (3).

Furthermore, the conversions are dependent on adequate levels of other nutrients, such as vitamins B6 and B7, copper, calcium, magnesium, zinc and iron. Many of these are lacking in the modern diet, especially among vegetarians (23).

The low conversion rate is also because omega-6 fatty acids compete for the same enzymes needed for the conversion process. Therefore, the high amount of omega-6 in the modern diet can reduce the conversion of ALA to EPA and DHA (5, 24).

Bottom Line: ALA is not biologically active in the body. It needs to be converted into EPA and/or DHA in order to become active, but this conversion process is inefficient in humans.

ALA, EPA and DHA are the most abundant omega-3 fatty acids in the diet.

However, at least 8 other omega-3 fatty acids have been discovered:

These fatty acids are found in some foods, but are not considered essential. However, some of of them do have biological effects.

Bottom Line: At least 8 other omega-3 fatty acids have been discovered. They are found in some foods and can have biological effects.

Which Omega-3 Fatty Acid is Best?

The most important omega-3 fatty acids are EPA and DHA.

EPA and DHA are mainly found in seafood, including fatty fish and algae, meat and dairy from grass-fed animals, and omega-3 enriched or pastured eggs.

If you don’t eat a lot of these foods, then omega-3 supplements can be useful.

11 Probiotic Foods You Should Be Eating