3 More GOP Candidates to Jump in Presidential Race: Where Do They Stand on Climate? 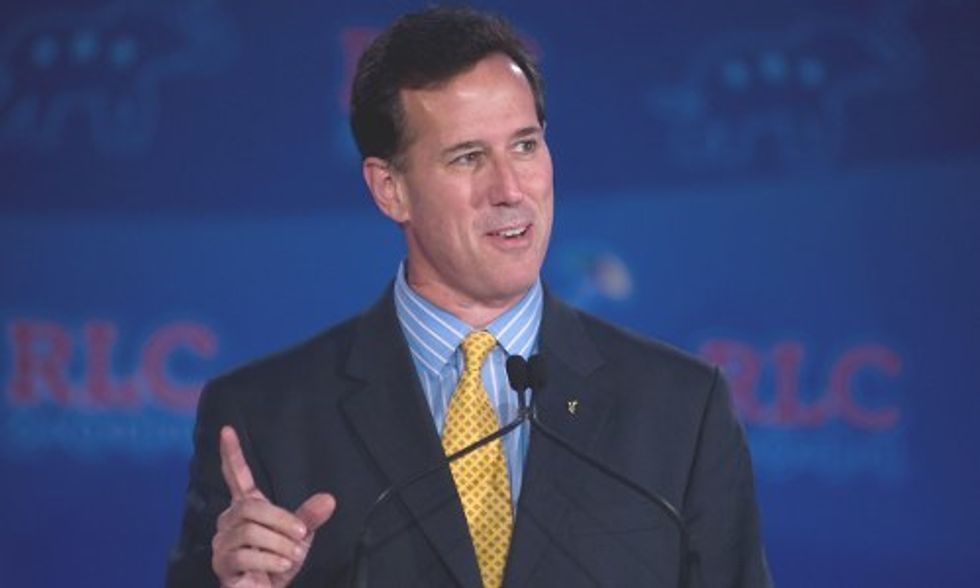 Dust off those scorecards! The Republican presidential field is set to expand again. One of the candidates fully embraces climate denial, while one appears to be trying to position himself as a sane, electable candidate while still appealing to a GOP base that's grown increasingly conservative. And one boasts a reputation as an avid environmentalist.

Rick Santorum, who is not a scientist, says 97 percent of climate experts are guilty of "junk science."
Photo credit: Shutterstock

Former Pennsylvania Sen. Rick Santorum is primarily known for his extreme positions on social issues aka sex. He has repeatedly made statements equating gay sex to incest, polygamy and bestiality—famously saying marriage equality would open the door to "man on dog" sex. He's said that contraception is "harmful" to women and that sex should be only for procreation no pleasure. It was the billionaire backer of his 2012 presidential campaign, Foster Friess, who suggested that the best method of birth control was for women to put an aspirin between their knees.

Santorum is no friend of the climate either. He's taken the position popular in some climate denier circles that, yes, climate change is happening but humans have nothing to do with it and humans can't—or shouldn't try to—fix it. He's called the position of 97 percent of climate scientists "junk science."

Back in January, Santorum told CNN host Michael Smerconish, "Is the climate warming? Clearly, over the past 15 or 20 years, the answer is yes. The question is, is man having a significant impact on that, number one. And number two, and this is even more important than the first, is there really anything we can do about it? Is there anything the United States can do about it? Clearly, no. Everything that is being considered by the United States will have almost—well, not almost, but zero impact on it given what’s going on in the rest of the world.”

When Smerconish asked Santorum if he meant the U.S. should do nothing, Santorum replied, "If it has no impact, of course, do nothing! Why would you do something with people admitting that even if you do something, it won’t make a difference?”

Precisely who the "people" Santorum cites is not clear.

It's not the first time he's publicly espoused climate denial. During his first presidential run in 2012, he appeared on Rush Limbaugh's radio program and issued a position that will sound familiar to anyone who has been listening to GOP candidates lately; that the Earth warms and cools naturally.

"I believe the Earth gets warmer and I also believe the Earth gets cooler," he said. "And I think history points out that it does that and that the idea that man, through the production of CO2—which is a trace gas in the atmosphere, and the man-made part of that trace gas is itself a trace gas—is somehow responsible for climate change is, I think, just patently absurd when you consider all the other factors, El Niño, La Niña, sunspots, moisture in the air. There's a variety of factors that contribute to the Earth warming and cooling."

The only thing he forgot to add is that he's not a scientist, although that statement makes it pretty evident. He continued in full-blown denier mode, saying, "It's just an excuse for more government control of your life. And I've never been for any scheme or even accepted the junk science behind the whole narrative."

Santorum is certainly a long shot for the GOP nomination. South Carolina Sen. Lindsey Graham and former New York Gov. George Pataki, who both intend to announce the campaigns next week, are even longer shots. And they probably don't help themselves in this particular contest by being in contact with reality on climate change.

That's especially true of Pataki, who served as governor from 1995 through 2006. He earned a reputation as a friend of the environment during that time, pushing projects that cut greenhouse gas emissions, improved water quality, encouraged green building practices and protected green space. According to the Albany Times-Union, his Regional Greenhouse Gas Initiative, the country's first state cap-and-trade program, was the target of a (failed) lawsuit from a Buffalo-based leader of Americans for Prosperity, which the paper pointed out is "a conservative political action group supported by oilmen David and Charles Koch that is linked to the tea party movement."

Lindsey Graham probably won't be getting any money from the billionaire Koch brothers either. He's acknowledged that all the climate denial going on in the GOP might not be healthy for them.

As for his own position, he said he accepts that humans are driving climate change but rejects cap-and-trade as a solution and claims that Al Gore has turned it into a "religion."

“I'm for finding oil and gas that we own,” he said on Fox News last month. “I'm for clean coal, I'm for natural gas, but I would like a lower carbon economy over time. Clean up the air and create jobs in the process.”