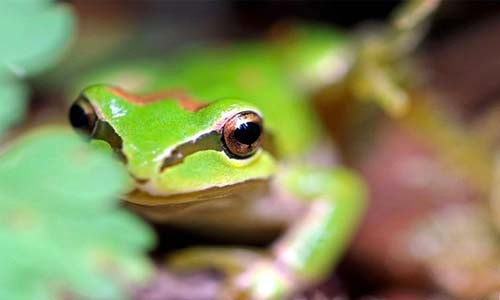 In honor of Save the Frogs Day, April 30, we’re celebrating species of frogs that depend on a very unique habitat—vernal pools.

Vernal pools are shallow depressional wetlands that appear seasonally in meadows and woodlands and serve as important breeding grounds for amphibians like frogs. The seasonal wetlands and pools of the prairie pothole region are also vernal pools. Memorialized in Robert Frost’s Spring Pools, these unique wetlands usually collect water in the winter and spring and typically dry up by the end of summer.

Since vernal pools are usually not filled with water year-round, fish cannot inhabit them. This makes vernal pools prime habitat for frogs like the ones below because there aren’t any fish to eat their eggs and tadpoles! 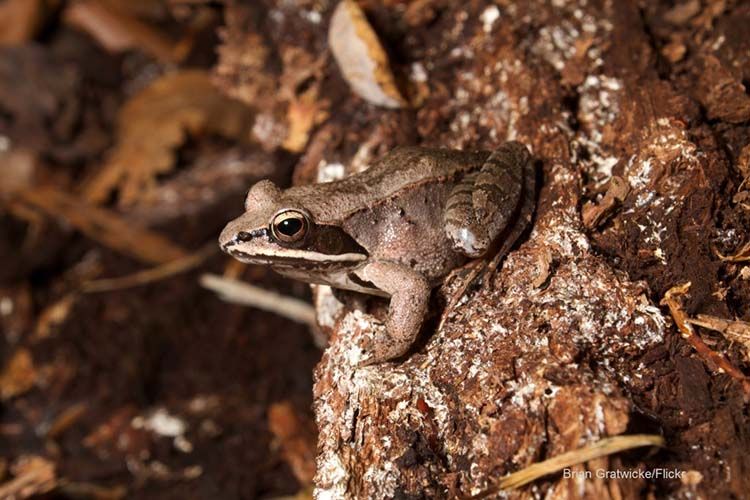 Wood frogs come in varying shades of brown and red, with black marks over their eyes that resemble a robber’s mask. Photo credit: Brian Gratwicke / Flickr

The wood frog ranges from New England, the Appalachians and the Great Lake states to as far north as the Arctic Circle. To survive, they possess the surprising ability to freeze!

During cold winter months, they cease breathing, their heart stops and nearly 70 percent of their body water turns to ice. As ice crystals form beneath their skin, they produce a substance that acts as an anti-freeze, allowing them to stay alive.

As the weather warms in early spring, the frogs thaw out and head to vernal pools to find mates, sometimes even before the ice has fully melted. They’re the first frogs to herald in the spring with strange voices that sound similar to a duck quacking. 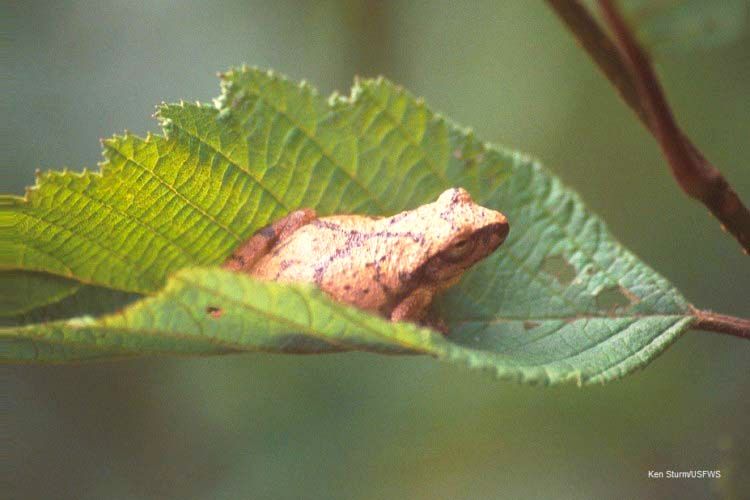 Spring peeper on an alder leaf. Distinctive dark lines form an X on its back. Photo credit: Ken Sturm / USFWS

The spring peeper, Pseudacris crucifer, also breeds in vernal pools to avoid predators like fish. These tiny frogs are found in vernal pools in many eastern states and are usually no longer than 1 inch. Their small size and nocturnal habits make them tough to spot, but they’re definitely not difficult to hear! Spring peepers emerge and start their ear-piercing choruses soon after the wood frogs. 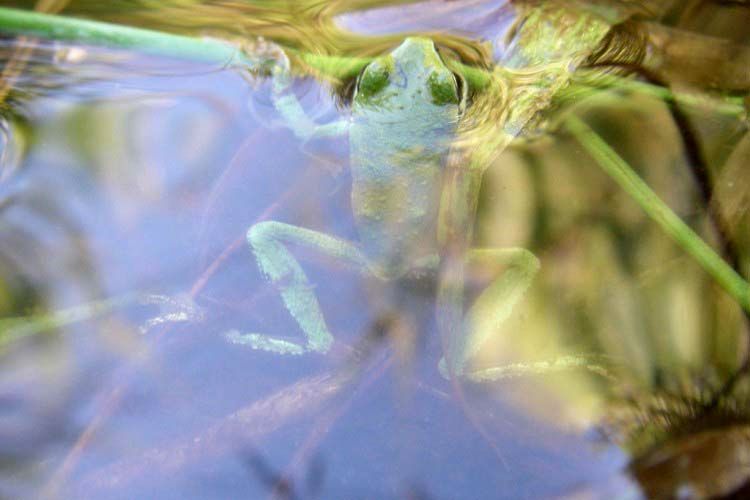 Vernal pools are also found out west, like those in California. The Pacific chorus frog is a common inhabitant of these western vernal pools during breeding season. The chorus frog’s characteristic “krek-ek” is the most commonly used frog noise in Hollywood films.

Though their seasonal nature makes vernal pools important breeding habitat for frogs, it also makes them vulnerable to development and pollution. Many amphibians return to the same wetland where they were born to breed, so the destruction of vernal pools may threaten many populations of these species.

Due to two Supreme Court cases that muddied what water bodies are covered by the Clean Water Act, small streams and wetlands have not clearly been protected. However, the Environmental Protection Agency and the Army Corps of Engineers have finalized the Clean Water Rule, which clears up these uncertainties and clarifies what waters have Clean Water Act protections. This rule would make it easier to more accurately identify and protect small streams and wetlands on which frogs and other wildlife depend.

Celebrate Save the Frogs day by taking action to help protect frogs who depend so much on these threatened wetlands.