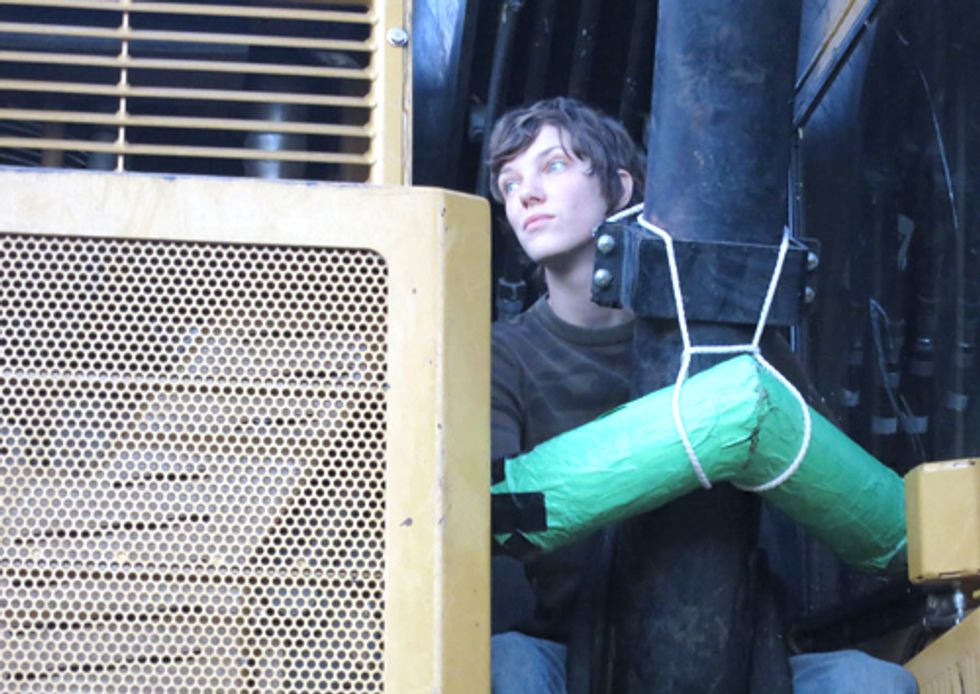 Three landowner advocates and climate justice organizers have locked themselves to feller buncher machines used for clearing large trees in the path of the Keystone XL pipeline. Today’s action has halted work on a segment of TransCanada’s illegitimate pipeline outside of Saltillo, TX. As promised, Tar Sands Blockade’s rolling campaign of nonviolent civil disobedience pushes forward.

Five blockaders total are currently risking arrest to stop work on this segment of the Keystone XL pipeline. Contractors discovered their presence early in the work day, and work at the site was called off shortly thereafter. Texas-born blockaders have united with neighbors from other states to support rural and neighboring communities threatened by the toxic pipeline’s diluted bitumen slurry.

Tar Sands Blockade’s landowner solidarity actions hit home with 22-year-old Houston-born blockader Sarah Reid. “This pipeline affects me, my friends and my family directly. The toxic contents threaten the water we drink, the air we breathe.” Reid, who traces her Texan ancestry back to Obedience Smith, the first female settler to own land in Texas, continues, “Out in East Texas, the landowners I’ve met are honest, hard working people who have been taken advantage of by TransCanada. They’re people who just want to protect themselves and their families.”

The sense that legal means have failed to curb the landowner abuse inherent in the current eminent domain process is palpable. Gary Lynn Stuard, 54, of Dallas is no longer willing to wait for regulatory reform or judicial intervention: “We have exhausted all of the traditional avenues, and it’s not enough. It’s unjust that a multinational company can seize people’s property by proclaiming themselves a “common carrier”—that’s eminent domain abuse. It’s theft, and these peoples’ homes and land shouldn’t be ruined while decisions on what to do are put off.”

Mikey Lowe, 24, traveled from California to raise awareness of the tar sands carrier’s deception. “I feel that eminent domain has really gone too far. I really want to show [the world] what’s going on,” he said.

Former Quinlan resident, Beverly Luff, 23, is primarily motivated by the threat that tar sands surface mining and extraction pose to the future of a livable climate. “The more people ignore it, the worse it will get. There’s only one planet, and we can’t afford to let dirty business interests cheat to win in East Texas or elsewhere.”

Tar Sands Blockade is a coalition of Texas and Oklahoma landowners and climate organizers using peaceful and sustained civil disobedience to stop the construction of the Keystone XL tar sands pipeline. Today’s action comes on the heels of last week’s outside of Livingston, TX in which seven blockaders were arrested when four locked themselves to a truck delivering pipe segments to a Keystone XL construction site. Their successful nonviolent action stopped activity in the pipeyard for the day. In response, TransCanada claimed its pipeline was not to carry anything other than “crude oil,” which is factually inaccurate at best.

“TransCanada commits fraud when it lies about the substances in its toxic tar sands slurry pipeline,” explains Tar Sands Blockade spokesperson Ron Seifert. “East Texans have been documenting TransCanada’s deceit for over four years now. Rural and neighboring families have been treated as nothing more than collateral damage by industry, political and regulatory leaders on all sides of the aisle. The truth is TransCanada will do or say anything to ram this pipeline through, regardless of who gets hurt along the way.”

Read the LiveBlog for updates throughout the day.