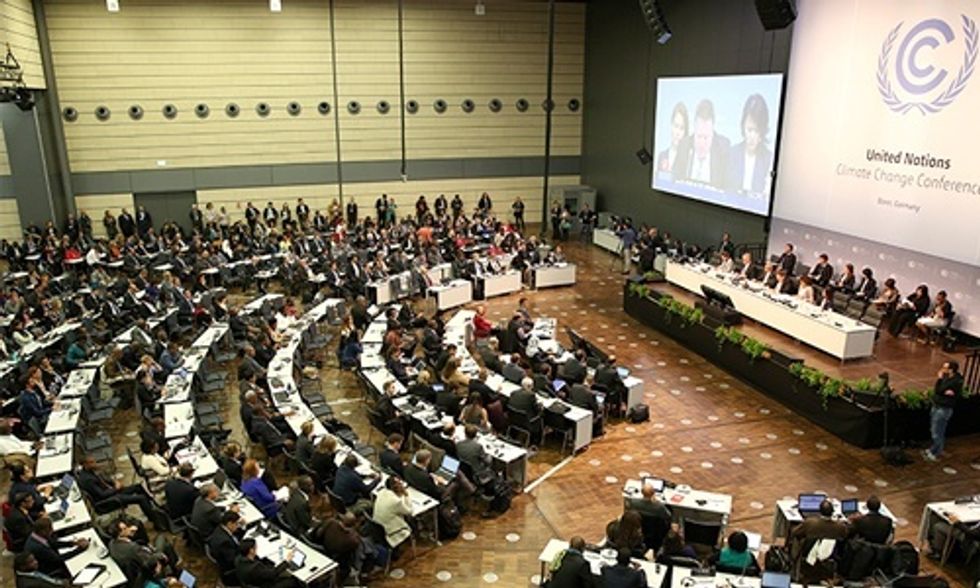 Pledges by the three titans of greenhouse gas emission—Europe, the U.S. and China, which are the three biggest fossil fuel consumers—fall “far short of fair” and may not be nearly enough to contain global warming, according to new research.

In the complex game of power politics, development economics, environmental campaigning, climate science and greenhouse gas accounting that will characterize the forthcoming UN climate summit in Paris, COP21, in December, the most important components so far are the declarations of intent made by the most developed nations.

The question then is: does this set the world on course to contain global warming to 2°C?

The answer is probably “no,” say Glen Peters, senior research fellow at the Centre for International Climate and Environmental Research in Oslo, Susan Solomon, professor of atmospheric chemistry and climate science at the Massachusetts Institute of Technology, and Pierre Friedlingstein, chair in mathematical modeling of climate systems at the University of Exeter, UK.

They have been looking at the sums, and they report in Environmental Research Letters that the promises of the big three translate into harsh demands for the rest of the world.

If the 2°C target is to be met, the remainder of the world would have to commit to per capita carbon dioxide emissions somewhere between seven and 14 times lower than the EU, U.S. or China by 2030.

Carbon accounting—the calculations that involve how much carbon dioxide can safely be emitted before temperatures rise to dangerous levels—is notoriously difficult, and under continuous revision.

But one working estimate right now is that the world can burn coal, oil and natural gas at a level that will have dumped 3.7 trillion tonnes of carbon dioxide in the atmosphere before the global average temperatures notch up 2°C above the levels before the Industrial Revolution.

Since humans have been burning fossil fuels at increasing rates for the last 200 years, that leaves just 1 trillion tonnes—about 30 years’ worth at the current levels—before the planetary thermometer rises to the danger level.

The study puts it bluntly: when combined, the European, U.S. and Chinese pledges don’t leave much room for other countries to burn fossil fuels to power their economies.

If any agreement in Paris is to be “globally inclusive and effective in the long term”, then by implication the rich nations will have to do a lot more than they have pledged to do.

“The challenge of the problem is that we have about 7 billion people on the planet, and about 1 billion of us live pretty well,” Professor Solomon says.

“The other 6 billion are struggling to develop, and if they develop using carbon, as we did, the planet is going to get quite hot. And hot is, of course, just the beginning of the story in terms of what climate change actually means.”

The scientists calculate that, even if the EU, China and the U.S. fulfill their pledges, it commits the planet to a warming of at least 3°C. Even a rise of 2°C would represent a huge change—resulting in sea level rise, a greater frequency of extremes of temperature and dramatic shifts of climatic conditions.

In 2003, an unprecedented heatwave in Europe caused at least 10,000 deaths, with some estimating many times more than that figure.

“That summer was about 2°C hotter than an average European summer,” Professor Solomon says.

“By 2050, every summer in Europe will probably be 2°C hotter than average, if we keep going the way we’re going right now. Three degrees, in my opinion, is a really frightening change.”