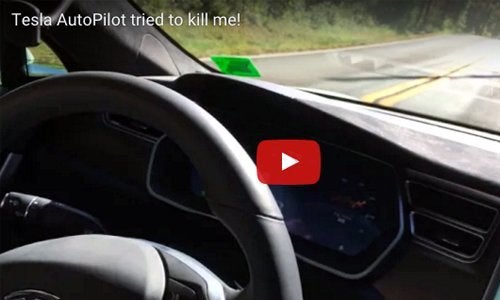 Oct. 21, 2015 is Back to the Future Day, the day in Back to the Future Part II that Marty McFly and Doc Brown arrive in Hill Valley after traveling forward in time from 1985. So it’s fitting to be talking about such a futuristic technology.

Last week, Stephen Colbert, a proud Tesla owner, told viewers of the Late Show that he woke up to find his Tesla could now drive itself. Colbert was ecstatic about the new update, which is added to the car through Wi-Fi, in the same way your phone gets updates. “This technology is self-driving towards us whether we like it or not,” said Colbert.

Though the latest update only makes the cars semi-autonomous, Tesla CEO Elon Musk estimates that a fully autonomous car might only be a few years away. Tesla warned on its blog that “the driver is still responsible for, and ultimately in control of, the car.” If a Tesla on autopilot gets in an accident, it will still be the driver’s fault. And according to The Guardian, Musk said: “We’re being especially cautious at this early stage, so we’re advising drivers to keep their hands on the wheel just in case. The software is very new.”

So of course, there were bound to be some mishaps. People have been posting videos of Tesla autopilot fails on the Internet.

Here are three such snafus:

1. In this one, the driver got busted by the Florida highway patrol because the autopilot was going 75 mph in a 60-mph zone. I guess his autopilot has a bit of a lead foot.

2. This “proud Tesla owner,” who says he still considers it the best car he’s ever owned, almost had a head on collision with an oncoming car. He explains how it happened in the description of his video.

3. In this video, the autopilot works perfectly, until the car got off the highway…