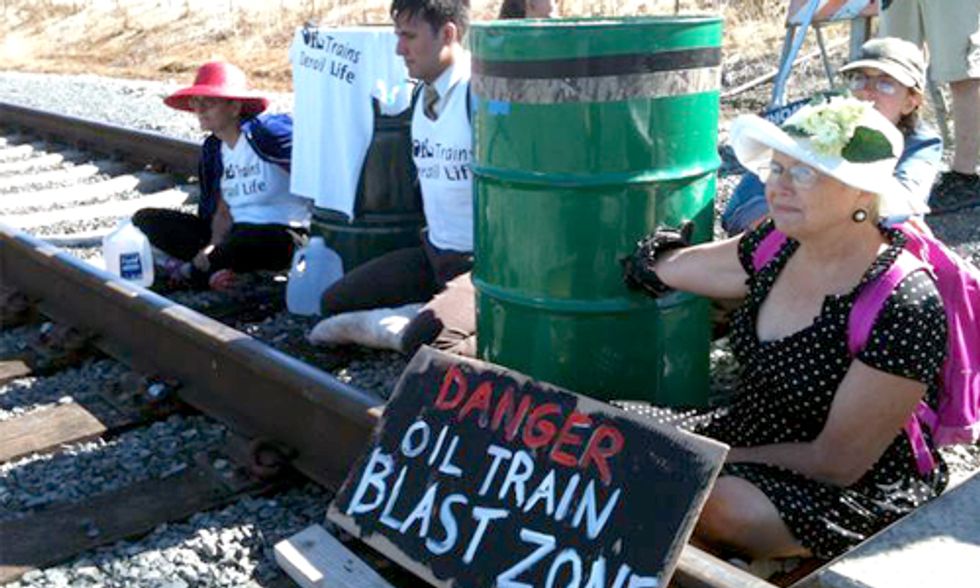 Three Seattle area residents were arrested today after blockading train tracks at an oil facility at Tesoro’s Anacortes Refinery. The protestors were demanding an immediate end to the shipment of Bakken oil through Northwest communities, all new oil-by-rail terminals proposed for the Northwest and Clean Air Act violations by oil refineries.

“Thursday’s derailment was the last straw,” said Jan Woodruff, an Anacortes resident who was blockading the tracks. “If federal and state regulators won’t stand up to the fossil fuel companies endangering our communities, then we, the people of those communities, will do so.”

The blockade prevented at least one oil train from using the tracks as the protestors were locked down inside the train bed for more than four hours with their arms locked inside of 55-gallon barrels filled with concrete.

Last week, an oil train bound for Tesoro’s Anacortes Refinery derailed in Seattle, WA under a busy bridge highlighting the dangers posed to Northwest communities. Nine to 16 oil trains travel through Seattle and Mount Vernon every week with about five bound for the Tesoro refinery. The day before the derailment, Seattle Mayor Ed Murray and all nine city council members sent a letter to the Department of Transportation asking for an immediate halt of oil-by-rail shipments through Seattle.

“Even though they travel through our city, we as a city, do not have control over how the railways are used, and we must rely on the safety standards that are set at the federal level,” Seattle Mayor Ed Murray said in a statement following the derailment. “This is an important public safety issue facing Seattle and I will continue to advocate for less oil and coal coming through our city.”

Despite the extreme controversy over the transport of Bakken oil, three oil-by-rail terminals were permitted in Washington state without full environmental review or robust public input. Permitting was allowed through the process of “mitigated determination of non-significance.” This same process was used to approve terminals at the Port of Gray’s Harbor and Shell’s Puget Sound Refinery, but legal challenges and public opposition reversed these permits.

The blockade prevented at least one oil train from using the tracks as the protestors were locked down inside the train bed for more than four hours with their arms locked inside of 55-gallon barrels filled with concrete. Photo credit: Marcia Rosenquist

“It’s no surprise that an industry willing to sacrifice the entire planet to catastrophic climate change doesn’t see a few vaporized towns and cities as significant” said Adam Gaya, one of the blockaders and a member of Rising Tide Seattle. “With recent disasters and the accelerating climate crisis we shouldn’t even be considering new oil infrastructure.”

In 2010, Tesoro’s Anacortes Refinery was the site of an explosion that killed seven workers. The company was later determined to have committed 39 “willful” and five “serious” violations of safety regulations.

“Tesoro and the others are bad actors. If any other group of people exposed us to these risks, they’d be locked up,” says Annette Klapstein, a retired lawyer from Bainbridge Island. “This kind of resistance may seem extreme, but these are extreme times … and the resistance to this craziness won’t end with us.”

1,000+ March in DC Demanding a Halt to Fracked Gas Exports