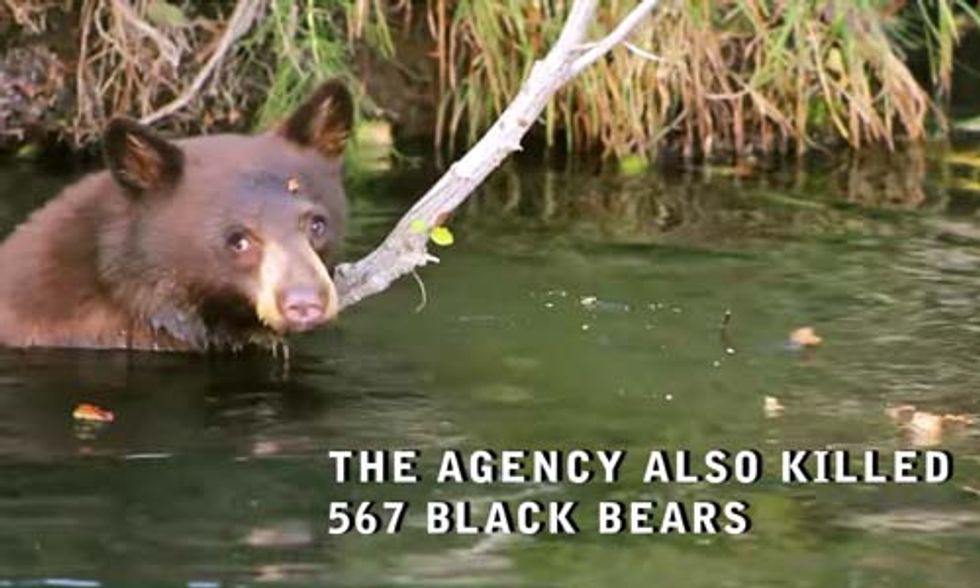 The highly secretive arm of the U.S. Department of Agriculture known as Wildlife Services killed more than 3.2 million animals during fiscal year 2015, according to new data released by the agency.

The total number of wolves, coyotes, bears, mountain lions, beavers, foxes, eagles and other animals killed largely at the behest of the livestock industry and other agribusinesses represents a half-million-animal increase more than the 2.7 million animals the agency killed in 2014.

Despite increasing calls for reform a century after the federal wildlife-killing program began in 1915, the latest kill report indicates that the program's reckless slaughter continues, including 385 gray wolves, 68,905 coyotes (plus an unknown number of pups in 492 destroyed dens), 480 black bears, 284 mountain lions, 731 bobcats, 492 river otters (all but 83 killed “unintentionally"), 3,437 foxes, two bald eagles and 21,559 beavers. The program also killed 20,777 prairie dogs outright, plus an unknown number killed in more than 59,000 burrows that were destroyed or fumigated.

“Despite mounting public outcry and calls from Congress to reform these barbaric, outdated tactics, Wildlife Services continues its slaughter of America's wildlife with no public oversight," Michael Robinson of the Center for Biological Diversity said.

“There's simply no scientific basis for continuing to shoot, poison and strangle millions of animals every year—a cruel practice that not only fails to effectively manage targeted wildlife but poses an ongoing threat to other animals, including pets."

Agency insiders have revealed that the agency kills many more animals than it reports.

The data show that the Department of Agriculture boosted its killing program despite a growing public outcry and calls for reform by scientists, elected officials and nongovernmental organizations.

“The Department of Agriculture should get out of the wildlife-slaughter business," Robinson said.

“Wolves, bears and other carnivores help keep the natural balance of their ecosystems. Our government kills off the predators, such as coyotes and then kills off their prey—like prairie dogs—in an absurd, pointless cycle of violence."

What Freedom Could Look Like for SeaWorld's Killer Whales