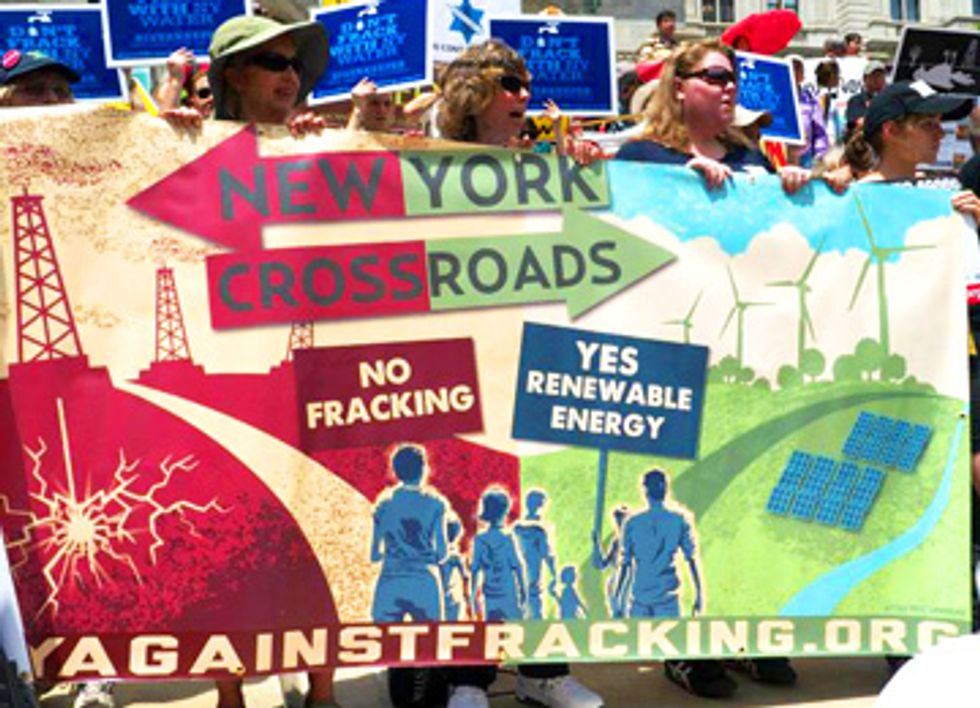 More than 3,000 New Yorkers took time off work yesterday to send a message to Albany that they want Gov. Cuomo and the state legislature to reject fracking and lead the nation in renewable energy. Organizers noted that the rally was larger than a similar rally at the State of the State address that kicked off the legislative session, indicative of the growth and momentum of the movement across the state. The second rally comes at the end of a legislative session that has included discussion of a two year fracking moratorium—which the Assembly passed overwhelmingly—and many, including Gov. Cuomo, have noted it would pass the Senate if allowed to come to the floor for a vote.

"Thousands of people here today are speaking for many more across the state with a simple call to Governor Cuomo: Ban fracking in New York," said Alex Beauchamp of Food & Water Watch. "They've seen the misery fracking has brought elsewhere—the accidents, the contamination and the devastating health effects—and they've learned the lessons. New Yorkers are fighting to keep their families safe and healthy, and they're sending a message that the oil and gas industry can and will be beaten back."

“The science is clear that fracking poses a serious threat to our health, the air we breathe and the water we drink,” said Julia Walsh of Frack Action on behalf of New Yorkers Against Fracking. “An unparalleled citizen uprising demands that Gov. Cuomo rejects fracking, and lead the nation by constructing a renewable energy economy here and now in New York. If he does, we stand ready to roll up our sleeves and get to work."

While Gov. Cuomo has been weighing whether or not to allow fracking, the oil and gas industry and their supporters have poured millions of dollars into New York to lobby, influence elected officials and saturate the state with pro-fracking propaganda. Yet, fracking opponents outnumber and remain more determined than supporters, demonstrating that New Yorkers aren’t buying the oil and gas industry’s propaganda and how seriously they take this issue.

“Governor Cuomo, my toddler deserves to breathe clean air, drink clean water and inherit a healthy future," said Logan Adsit of Save The Southern Tier. "Say no to fracking and pioneer a renewable energy economy for New York that offers my child a chance at a better future in the state we love.”

“My neighborhood—Love Canal—became synonymous with the hazards of toxic waste,” said Lois Gibbs. “If Governor Cuomo goes forward with fracking, we could have hundreds or thousands of Love Canals. I’m here today to tell Governor Cuomo not to turn the state we love so dearly into a giant toxic disaster.”

“We are here to show Governor Cuomo once and for all that fracking is not a viable energy option for New York," said Jim Dean of Democracy for America. "We must fully embrace renewable energy resources, and stop fracking now. Governor Cuomo has the opportunity to lead not only New York, but also the nation by setting an example for those who face the same difficult choice."

Independent observers have noted that the gas industry cannot be trusted when it describes fracking as safe. A recent investigation by the Times Tribune in Pennsylvania revealed many cases of water contamination from fracking. And a recent study showed that fracking emits significant amounts of methane—a major contributor to climate change. One of the key messages of the rally is that fracking is disastrous for the climate and for Governor Cuomo to allow it would be a stark contradiction to his vow to lead on climate change.

"Hurricane Sandy, fueled by Atlantic waters that were five degrees warmer than normal, caused $60 billion in damage downstate, to a city that I love and call home," said Phil Aroneanu, U.S. campaign director and co-founder of 350.org. "It's time for all of us to stand up and say ‘We're not drowning, we're fighting.’ Gov. Cuomo, do the right thing: Open up New York to solar and wind, to geothermal and tidal power—don't let us drown."

Stanford University Professor Mark Jacobson, lead author of a peer-reviewed study detailing a plan for New York State to get to 100 percent renewable energy by 2030 said, "Converting to wind, water and sunlight is feasible, will stabilize costs of energy and will produce jobs while reducing health impacts and climate damage."

“Our brewery is growing 20 percent annually, creating good-paying jobs in Cooperstown,” said Larry Bennett of Ommegang Brewery. “But we depend on clean water to brew our beer. And if fracking comes to New York, we’ll either have to shut down or move away.”