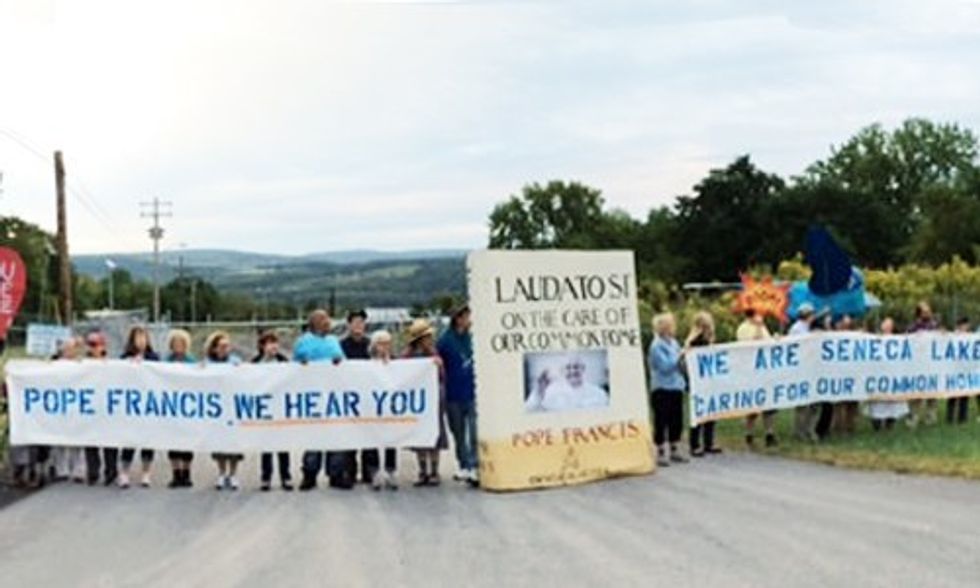 Just two weeks before Pope Francis’ visit to the U.S., where he is expected to call for urgent action to protect the world’s environment, 28 people, led by local members of the Catholic Worker Movement, formed human chains shortly after sunrise this morning across both entrances of Crestwood Midstream on Route 14. Joining the protest was famed peace activist Martha Hennessy—the granddaughter of Catholic Worker co-founder and candidate for sainthood, Dorothy Day.

Today’s blockaders held banners that said, “Pope Francis, We Hear You” and “We Are Seneca Lake Caring for Our Common Home.”

As in previous blockades this summer, the protesters carried with them a seven-foot-tall replica of Pope Francis’ recent encyclical letter on climate change, Laudato Si! On Care for Our Common Home, as they blocked trucks from entering or leaving.

The Catholic Worker Movement was founded by journalist Dorothy Day and social activist Peter Maurin in 1933. Its purpose is to “live in accordance with the justice and charity of Jesus Christ.”

Delivering a statement on behalf of the group, blockader Martha Hennessy, 60, of Manhattan, said, ”The Pope has put his finger right on what we need to do to change direction. As it says in Laudato Si!, whatever issue affects one of us affects us all. Seneca Lake is one body of water that we all now have concerns about. Catholic Workers was founded in 1933, another time of ecological catastrophe, including the Dust Bowl. My grandmother witnessed all of that. She fed striking and unemployed workers. She understood that we are all the body of Christ. We are all one of another. That’s what I learned from her.”

Mark Scibilia-Carver, 61, a Catholic Worker from the Town of Ulysses in Tompkins County, said, “Pope Francis has issued a powerful reminder to people of all faiths that the Earth is a shared inheritance. Water and climate are ours to safeguard, not plunder. Our peaceful act of civil disobedience today—at the gates of a fossil fuel company that threatens our children’s drinking water with explosive gases—says that we are listening. A Papal Encyclical is the second-highest teaching authority in the Catholic Church. The Pope understands well the threats posed to our common home by entities like Crestwood. Catholics, in particular, need to act on what the Pope has said and oppose these threats.”

The total number of arrests in the nine-month-old civil disobedience campaign now stands at 400.

The We Are Seneca Lake movement opposes Crestwood’s plans for methane and LPG storage in lakeside salt caverns and has been ongoing since October 2014.