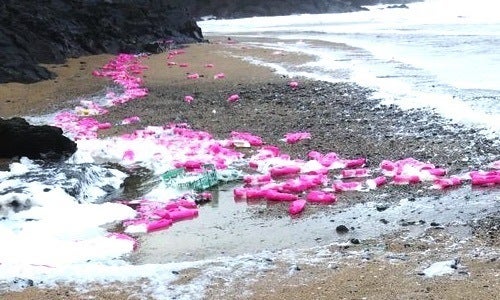 Many plastic bottles are washing up on Poldhu Beach in Cornwall, UK this week, making the waves literally pink.

It appears that a whopping 27,000 of these bright pink bottles—believed to be Vanish brand detergent—have washed ashore, prompting wildlife warnings in the area due to the potentially toxic contents of the bottles, according to UK-based ocean advocacy group Surfers Against Sewage.

Let's get started on making these 27,000 pink plastic bottles 'Vanish' from or beaches. Join us… https://t.co/3Tm8WArSqu

MailOnline reported that the bright pink bottles have been “strewn across bubbly sand as far as the eye can see” and even more bottles are expected to wash up in the coming days, the National Trust (who owns the beach) said.

Many of the bottles are full but some have leaked, a Cornwall council spokeswoman said. As you can see in the photos, the soapy content in the bottles have coated the shoreline with foam.

Conservationists told the BBC that nearby coves including Gunwalloe, Polurrian, Church Cove and Marazion have also been affected.

@WestBriton in the pink but not as we want. Bottles everywhere. Beach clean Friday 8th 10:00. All hands to the pump pic.twitter.com/GdXcKaJtOM

Although many people volunteered to pick up the plastic litter, they have also been warned to stay away.

“In the meantime the public are advised to keep children and dogs at a safe distance from the bottles should any more be washed up,” a Cornwall council spokeswoman said. “No attempt should be made to recover the bottles.”

In a blog post, Surfers Against Sewage warned about the harmful contents of the bottles:

“WARNING: These bottles are thought to contain hazardous and toxic chemicals, only handle with extreme care or report bottles to Cornwall Council and SAS to be removed by experts. Please remember, the contents are most likely toxic and if you decide to remove them, please take precautions (wearing gloves and store in an appropriate container).”

The area is currently being monitored by the Maritime and Coastguard Agency and Natural England. A wildlife warning has been issued for the area as the contents of the soap could be harmful to natural life, MailOnline reported.