2500+ Youth Rally in Pittsburgh for a Green Economy 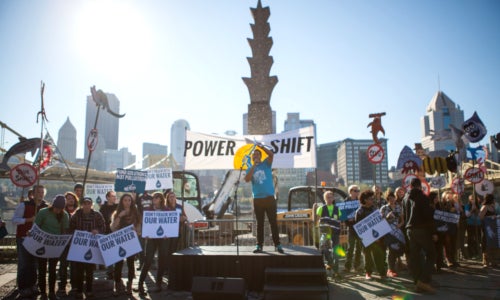 More than 2,500 youth activists at Power Shift 2013 marched through the streets of Pittsburgh today to confront corporate polluters and demand they join the fight for a clean and just economy. 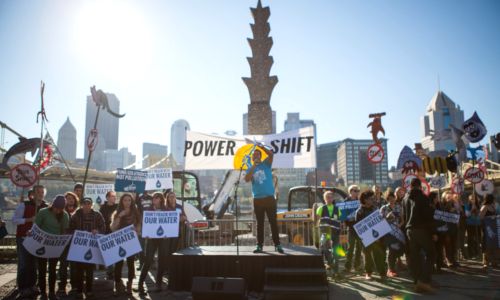 Thousands of people rallied in Allegheny Landing Park, alongside the Allegheny River, then marchers took over a bridge to cross to downtown Pittsburgh where they marched through the streets of Pittsburgh to confront big corporations and elected officials for financing fossil fuels and permitting fracking.

“Big corporations, and elected officials all the way up to President Obama should know that our generation will use political and financial power to stop financing fossil fuels and permitting dangerous fracking,” said Maura Cowley, executive director of Energy Action Coalition, “We’re marching to demand PNC and elected officials stop being complicit in fossil fuel destruction like mountaintop removal and fracking, and work with us to build a strong, green economy” 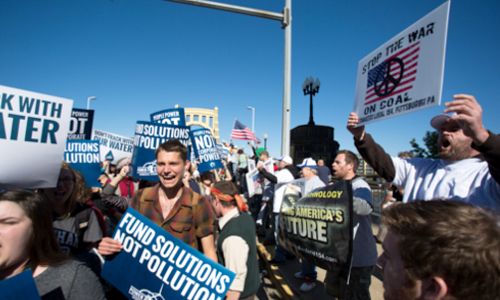 Deb Thomas of the Power River Basin Resource Council in Wyoming, kicked-off the rally by enlisting the 2,500 participants to join the call on President Obama and the U.S. Environmental Protection Agency (EPA) to take real action on fracking, starting by re-opening the investigation into fracking-water contamination in Dimock, PA, Pavillion, WY and Parker County, TX. More than 270,000 petitions already been sent to the EPA by a coalition of organizations including Energy Action Coalition, Stop The Frack Attack, Americans Against Fracking, MoveOn.org, Food & Water Watch and more.

“The EPA studies in Dimock, PA, Parker County, TX, and Pavillion, WY, need to be re-opened because impacted people, who are forced to live with oil and gas development need information about what they have been exposed to. It’s critical to protect their families and their health. Our government must protect people not toxic industry” said Thomas. 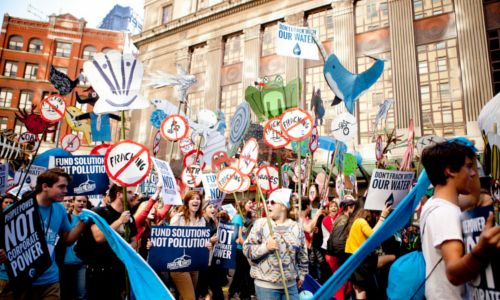 The march went across the Roberto Clemente Bridge where a massive banner was dropped that said “Don’t Frack Our Water” and then marched across Pittsburgh, stopping at PNC Bank branches to demand they stop financing mountaintop removal mining, one of the most destructive forms of mining that is destroying communities in Appalachia.

“We are here as the face of the many communities impacted by mountaintop removal strip-mining and the short-sighted investment practices of PNC bank,” said Teri Blanton of Kentuckians of the Commonwealth. “Our homes are flooded, our water is poisoned, our lungs are filled with dust—all because of the mountaintop removal mining. The worst part of it all is that they can’t put it back—they can’t fix the mountain or the stream—and that means it’s not only our health that’s compromised, but the health of future generations. That’s what PNC is investing in: the permanent destruction of our health and homeland.” 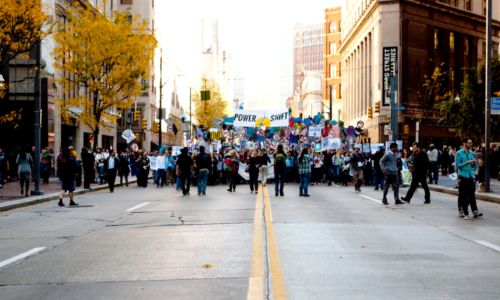 The rally and march capped off Power Shift 2013, a national convergence of nearly 8,000 student and youth activists working on climate change, environmental justice and building a clean energy economy.