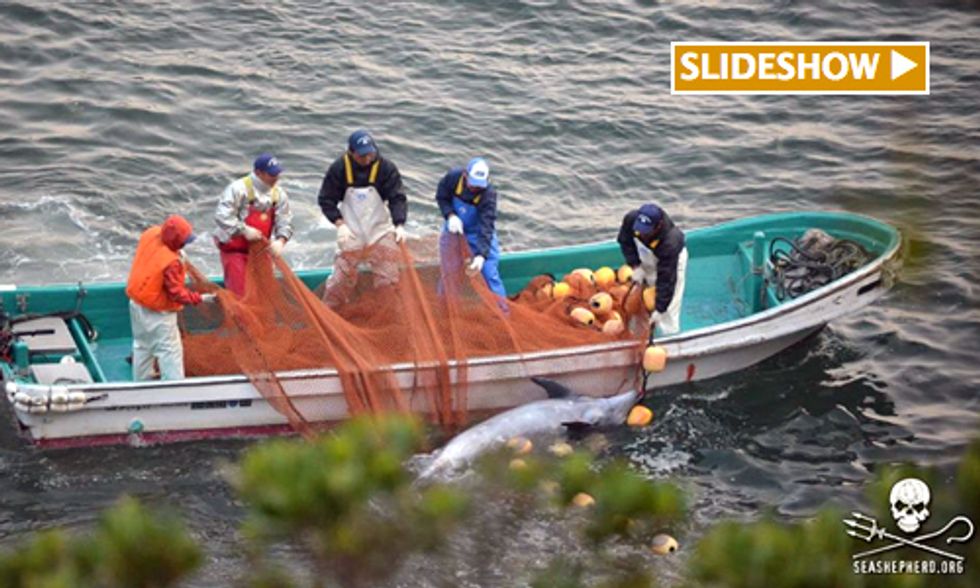 As we have witnessed the torture endured by 250+ dolphins in a cove in Taiji, Japan the past four days, as their families have been torn apart, and as our Cove Guardians continue to witness and show the world what is happening, we would like to share a quote from Dr. Martin Luther King, Jr., who was a pioneer of human as well as animal rights:

“Never, never be afraid to do what's right, especially if the well-being of a person or animal is at stake. Society's punishments are small compared to the wounds we inflict on our soul when we look the other way.”

The world is not looking the other way, but will Japan listen? Eleven more dolphins were taken into captivity yesterday, bringing the total taken from this hunt to 51 (though two died). These dolphins do not belong to Japan. They belong to all of us—to the oceans and the planet and they matter in their own right. Though these dolphins face death today, in the spirit of Dr. King, Sea Shepherd Conservation Society and our Cove Guardians will never be silent about what they, driven into the shallow waters of Taiji, have faced. The eyes of the world are now laser-focused on Taiji’s cove, and many will hear the cries of the dolphins.

Five separate pods of Bottlenose dolphins totaling more than 250 individuals—including juveniles and babies—were driven into Taiji’s infamous killing cove on Thursday, where they have endured four days of a bloody and traumatizing captive selection process. The remaining group of about 200 dolphins, who were left to survive a fourth night in the cove without food or shelter, now face brutal slaughter at the hands of the Taiji Fishermen’s Union. Among the original “superpod” was a rare albino calf and his or her mom. In some cultures, albino animals are considered sacred “spirit” creatures, and it is thought to be bad luck to harm them.

The unique albino calf, a rare and lucrative find to exploit as a spectacle in captivity, was the very first dolphin to be snatched away from her mother’s side and taken captive on Friday and transferred directly to Taiji Whale Museum. Japanese press is reporting that the mother rejected the calf and so they rescued her, but that is a blatant fabrication as the thousands who watched our live stream of the kidnapping can attest. The baby is possibly blind and/or deaf, as is the case with many albinos. If so, this could be one of the reasons that this terrified calf clung so closely to his or her mother in the cove and now clings to a dolphin companion sharing the calf’s tiny tank.

There is widespread speculation that the mother of the albino calf committed suicide after her baby was violently taken from her. Our volunteer Cove Guardians documented and witnessed the grieving mother repeatedly spy-hopping, looking for her calf, before lowering herself into the water, never to resurface. Dolphins are highly intelligent, socially complex beings who form close bonds with their family, and the trade for captivity regularly rips through these bonds in Taiji.

The captive selection process is as violent as the killing in Taiji, and during the past four days, dolphins could be seen on our Cove Guardians live stream with blood on their faces as they desperately tried to escape the grasp of the killers and trainers. Dolphins repeatedly became entangled in the nets in their frantic efforts to escape or get to separated family members, the nets cutting through their flesh. The dolphins were further injured when run over by the skiffs being driven right over the pod. At one point, propeller blades of a skiff backed into a huddled grouping. The killers regularly use the outboard motors to intimidate and herd the sound-sensitive dolphins. All three Taiji captive facilities—Dolphin Base, Hotel Dolphin Resort and Taiji Whale Museum—have had trainers in the cove taking dolphins to line their pockets and fill their tanks. Some captives caught in Taiji’s hunts remain there in the local captive facilities, and others are transported to aquariums and marine parks around the world.

Yesterday, 11 more dolphins were taken captive, bringing the total number of dolphins torn from their families to 51 over the past four days. Friday and Saturday’s selections each saw a captive dolphin succumb to the stress and injuries of the day. The greed never stops in Taiji, and it feeds a global captive trade. Some of these dolphins could remain in Taiji while others could be sent to marine parks in the Middle East, Mexico, China and elsewhere.

After enduring such horrific cruelty at the hands of the Taiji Fishermen’s Union, the remaining 200 dolphins will continue to suffer, as today many of them will likely face a long and painful death. Dolphins who have already endured separation from their now captive family members will soon see other loved ones killed before their eyes. They will be forced to swim in water turned red with the blood of their family. The larger family members are killed first. Others may be driven back out to sea, including infants and juveniles who are too small and the fishermen don’t want them counted against their self-imposed quota, where the young ones stand little to no chance of survival without the protection of their pod and mothers, especially after the violence and trauma of the last four days.

The flesh of those slaughtered will be sold for human consumption by the Taiji Fishermen’s Union, despite the fact that it contains high levels of mercury and other harmful toxins.

The drive hunt and slaughter of 20,000 dolphins, porpoises and small whales occurs throughout Japan each year. Japan refuses to sign on to many protection efforts and regulations for marine mammals, despite most of the world recognizing the need to protect these imperiled animals. The most well-known among these annual hunts occurs in Taiji from Sept. 1 and usually continues through March of the following year. Fishermen herd entire cetacean families into shallow bays where they are mercilessly stabbed with a metal spike inserted into their blowhole to sever their spine. The dolphins slowly and painfully bleed to death or drown in the blood of their family. These inhumane killings would not be allowed in any slaughterhouse in the world.

Taiji’s annual dolphin slaughter was virtually unknown until Sea Shepherd released covertly obtained footage and photographs taken at the Cove in 2003, followed by further international attention due to the Academy Award-winning film The Cove.

CALL TO ACTION: Join Sea Shepherd in speaking out for the largest Bottlenose pod ever driven into Taiji’s killing cove. Click here to find contact information for embassies and consulates, and for more information on what you can do.