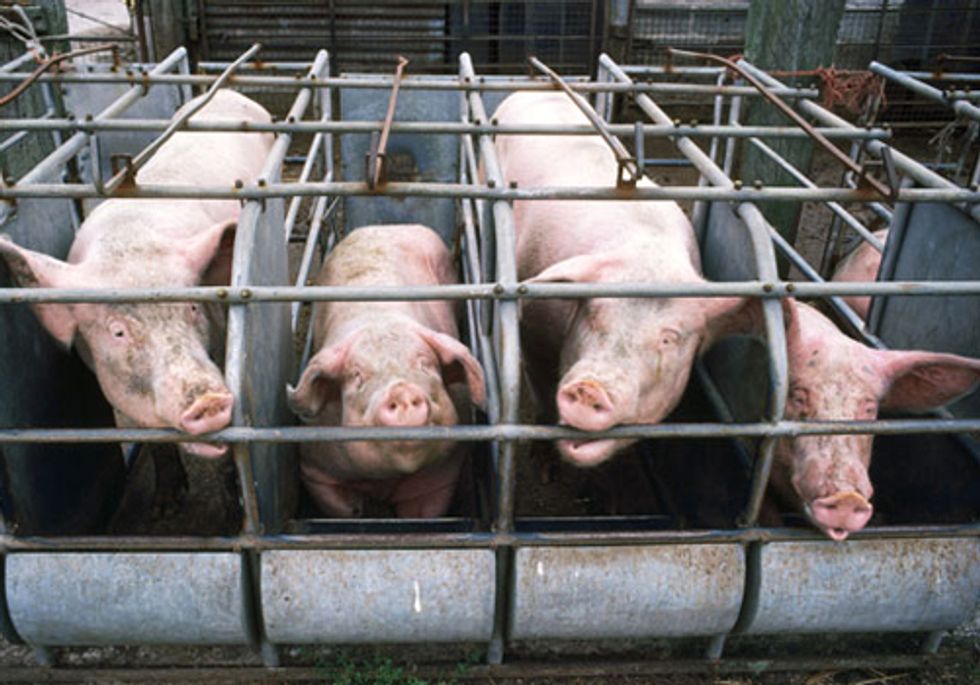 Almost a quarter of a million people have signed a petition to Tyson Foods, the world’s second-largest meat processor and major U.S. pork supplier, created by consumer watchdog group SumOfUs.org and The Humane Society of the United States (HSUS) demanding the company develop plans for getting the gestation crate confinement of pigs out of its supply chain.

The petition follows the announcements of many of the nation’s largest food companies–including McDonald’s, Burger King, Wendy’s, Kroger, Safeway and Denny’s–that they will eliminate gestation crates from their supply chains. The effort also follows this Spring’s release of undercover footage taken by the HSUS at a pig factory farm that was supplying animals to Tyson Foods, in which breeding pigs were crammed into gestation crates, piglets were kicked like soccer balls and swung in circles by their hind legs and mother pigs were repeatedly beaten when they resisted being separated from their young, among other abuses.

“Consumer citizens have sent a message that is loud and clear to Tyson’s that they don’t support forcing pigs to spend their lives crammed inside cages so small they can’t even turn around,” said Taren Stinebricker-Kauffman, founder and executive director of SumOfUs.org. “Consumers are showing their power over corporations to shift their practices and shift entire industries. It’s time for Tyson to move beyond gestation crates to alternative housing.”

“Countless people care about how animals raised for food are abused and gestation crate confinement has come to epitomize that cruelty,” continued Stinebrickner-Kauffman. “The demise of gestation crates has become inevitable and Tyson should stop lagging behind its competitors and start thinking outside the crate.”

Earlier this Spring, SumOfUs.org members were instrumental at getting Tim Hortons, the fourth largest restaurant chain in North America, to commit to getting their pork producers to submit plans for phasing out gestation crates by the end of 2012.

About Gestation Crates:
• More than 80 percent of breeding pigs in the U.S. are confined day and night during their four-month pregnancy in gestation crates, cages roughly the same size as the animals’ bodies, preventing them from even turning around. They are then placed into another crate to give birth, are re-impregnated, and put back into a gestation crate.  This happens pregnancy after pregnancy for their entire lives, adding up to years of virtual immobilization.
• Eight U.S. states have passed laws to ban the practice and Massachusetts, New York, New Jersey and Rhode Island have bills pending that would do the same.
• Renowned animal welfare scientist and advisor to the pork industry, Dr. Temple Grandin, is clear on this issue: “Confining an animal for most of its life in a box in which it is not able to turn around does not provide a decent life.” Grandin further states, “We’ve got to treat animals right and the gestation stalls have got to go.”

SumofUs is a global movement of consumers, investors and workers all around the world, standing together to hold corporations accountable for their actions and forge a new, sustainable and just path for our global economy.

The Humane Society of the United States is the nation's largest animal protection organization—backed by 11 million Americans, or one of every 28. For more than a half-century, the HSUS has been fighting for the protection of all animals through advocacy, education and hands-on programs.