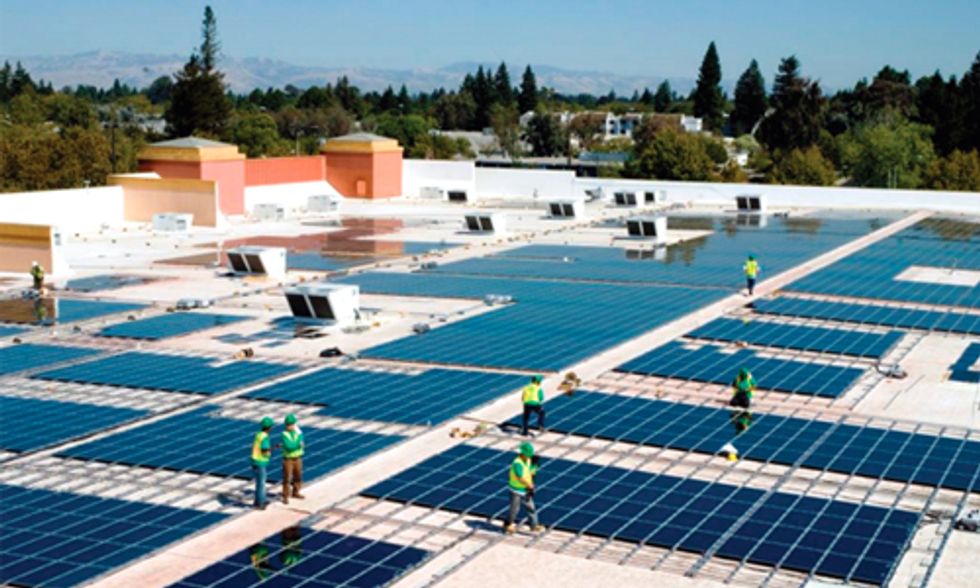 What do Walmart, Costco and Apple have in common besides selling cell phones and computers? These iconic brands, and many others like them, are all investing big in solar energy.

Reflective of the growing popularity and increasing growth of solar nationwide, many of America’s leading Fortune 100 companies continue to significantly ramp up their use of clean solar energy, according to the third annual Solar Means Business report, which was released today by the Solar Energy Industries Association (SEIA).

Combined, these blue chip companies have deployed 569 MW of solar capacity at 1,100 locations—a 28 percent increase over a year ago and a 103 percent increase since 2012, when the first report was released. Photo credit: Solar Energy Industries Association

These forward-looking companies are helping to create thousands of American jobs, boost the U.S. economy and improve our environment. The 1,110 commercial solar systems currently in operation are generating enough clean electricity to prevent 549,296 metric tons of damaging carbon emissions from being released into our air. That’s the equivalent of saving nearly 62 million gallons of gasoline.

The comprehensive new report, which identifies major commercial solar projects and ranks top corporate solar users, shows Walmart at the top of the list for the third year in a row with 105 megawatts (MW) installed at 254 locations.

Combined, these blue chip companies have deployed 569 MW of solar capacity at 1,100 locations—a 28 percent increase over a year ago and a 103 percent increase since 2012, when the first report was released. Representing a “Who’s Who” of the corporate world, these companies are playing an increasingly important role in the development, expansion and promotion of solar nationwide, while also reducing their operating expenses, benefiting customers and shareholders alike.

Today, IKEA leads all companies in the percentage of their facilities that are solar powered, with nearly 9 out of 10 stores now utilizing clean, reliable and affordable solar energy. General Motors is next in line at 43 percent.

According to the report, the “growing adoption of solar by the commercial sector is predominantly the result of consistent price declines. The average price of a completed commercial PV project in Q2 2014 has dropped by 14 percent year over year and 45 percent since 2012. As solar prices continue to fall, more businesses in more states turn to solar to cut operating costs.”

For American companies, solar makes sense. It saves money for customers and shareholders, while helping to reduce pollution and protect our environment. In business, that’s known as a doorbuster deal!