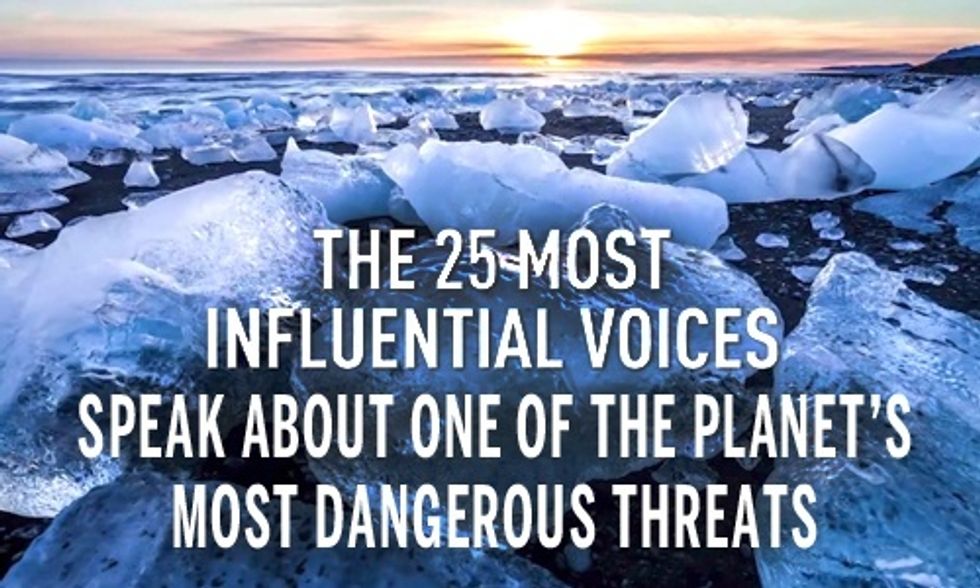 Some very prominent voices have gotten a lot of media attention for their comments on climate change, including President Obama and Pope Francis. And there are people within the scientific community who have been speaking out for years, providing us with information and thoughtful insights.

The Weather Channel's new media package, The Climate 25: Conversations With 25 of the Smartest Voices on Climate, Security, Energy and Peace, is bringing to the forefront a diverse set of voices and perspectives worthy of more attention.

It describes the project as "a digital media and television experience featuring interviews with the world’s 25 most compelling voices on one of the most pressing issues of our time—the impact of climate disruption on human security."

"There are are only a few issues more contentious than climate change in American political life," it says. "But while the climate change debate rages in some quarters, in others, most notably among those who study the climate, there is wide consensus. It’s for this reason that the Weather Channel has adopted a position on climate change that can generally be summed up as follows: we report the science, and the science consistently says climate change is real, humans are causing it and we must prepare for its effects."

All 25 people spotlighted start with the assumption that climate change is occurring, and go on from there to offer their opinions as to what that might mean for the planet, for local economies, and for peace and security. Some of the voices have names people might know, such as former Republican governor of New Jersey and former U.S. Environmental Protection Agency (EPA) administrator under President George W. Bush, Christine Todd Whitman. Others most probably have never have heard of such as Ugandan community leader/farmer Constance Okollet, who speaks out about the impact of climate change on her village.

The 25 individuals spotlighted include former politicians and government officials, business people, scientist, writers, retired military officers and community leaders. They range from the powerful, such as former Secretary of the Treasury Hank Paulsen who calls climate change "the biggest economic risk the world faces," to Syrian refugee Farah Nasif who talks about how drought fueled the revolution and the refugee crisis in her homeland.

"Everything changed with the drought," she says. "The drought was one of the main reasons for the revolution. They have that anger, that hate for the government. They said, 'Oh, this government doesn't help me before and I don't expect in the future so I will destroy it.'"

One interesting  aspect of the Weather Channel's Climate 25 is that most of the political figures are Republicans, including Whitman, Paulson, former South Carolina congressman Bob Inglis and William K. Reilly, U.S. EPA administrator under President George H.W. Bush, a rebuke to the climate deniers who make up the majority of the Republican presidential field. Inglis has attributed his defeat in 2010 to his outspokenness on the need to take action on climate change. In his video, he explains how he evolved from thinking climate change was a figment of "Al Gore's imagination" to introducing a carbon tax bill in Congress.

"Our challenge is explaining why conservative would want a new tax, especially a tax on carbon dioxide," he says. "My fellow conservatives, they sort of break out in hives if you mention the word 'carbon.' They go into anaphylactic shock when they hear the word 'tax.'"

"You cannot have thriving economy if people don't have clean air to breathe or clean water to drink or good quality of life," says Whitman. "The way the Republican Party is addressing the issue of climate change is both frustrating and puzzling, because if you think about it, it's our history. The first president to set aside open space was Abraham Lincoln with Yosemite. Then you have Teddy Roosevelt and the national park system and all he did to expand that. It was Richard Nixon who established the EPA. It's ours. It's our issue. It's conservation. It's conservative. This is an issue we should be talking about in a rational way."

The multi-platform project launched today on the website, mobile and Facebook, with a week of five mini-episodes airing on the Weather Channel. The Climate 25 is the latest commitment by The Weather Channel to "explore important topics at the nexus of weather, climate and impactful news."

NOAA: There Has Been No 'Pause' or 'Hiatus' in Global Warming