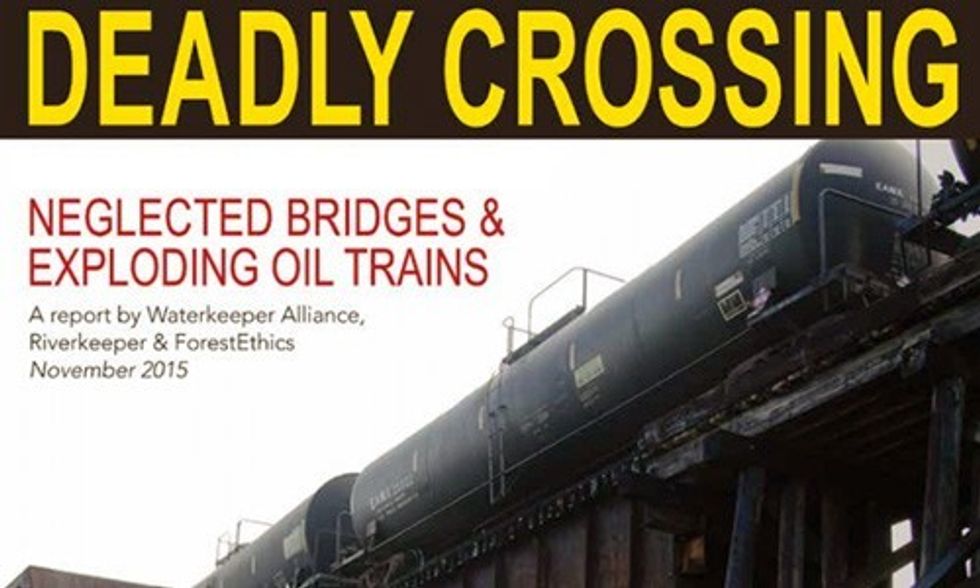 Waterkeeper Alliance, ForestEthics, Riverkeeper and a national network of Waterkeeper organizations released a new investigative report yesterday, DEADLY CROSSING: Neglected Bridges & Exploding Oil Trains, exploring the condition of our nation’s rail infrastructure and how it is being stressed by oil train traffic. From July to September 2015, Waterkeepers from across the country documented potential deficiencies of 250 railway bridges in 15 states along known and potential routes of explosive oil trains, capturing the state of this often neglected infrastructure in their communities.

The Waterkeepers identified areas of serious concern on 114 bridges, nearly half of those observed. Photos and video footage of the bridges inspected show signs of significant stress and decay, such as rotted, cracked or crumbling foundations and loose or broken beams. Waterkeepers were also present when crude oil trains passed and observed flexing, slumping and vibrations that crumbled concrete.

“Waterkeepers boarded their patrol boats to uncover what is happening to the structural integrity of our nation’s railway bridges, a responsibility our federal government has shirked,” said Marc Yaggi, executive director of Waterkeeper Alliance. “People deserve to know the state of this infrastructure and the risks oil trains pose as they rumble through our communities.”

This effort was initiated out of concern for the threat posed by the 5,000 percent increase in oil train traffic since 2008. Oil train traffic increases both the strain in rail infrastructure, as well as the likelihood of a rail bridge defect leading to an oil train derailment, spill, explosion and fire.

“Half the bridges we looked at have potentially serious safety problems,” says Matt Krogh, ForestEthics extreme oil campaign director. “There are 100,000 rail bridges in the U.S.—any one of them could be the next deadly crossing. Oil trains are rolling over crumbling bridges and we can’t wait for the next derailment, spill and explosion to act.”

“Do truckers get to inspect their own trucks? Do you get to inspect your own car? Of course not. So it’s insane and completely unacceptable, that the rail industry gets to inspect its own infrastructure while moving cargo that is of such enormous risk to American citizens and the environment,” said Riverkeeper boat captain John Lipscomb.

Oil trains directly threaten the life and safety of 25 million Americans living inside the one-mile evacuation blast zone in the case of an oil train fire and the drinking water supplies for tens of millions more, according to the report. The groups are calling for the federal government and rail industry to immediately inspect all rail bridges, share safety information with emergency responders and the public and stop oil train traffic on any bridge with known safety problems.