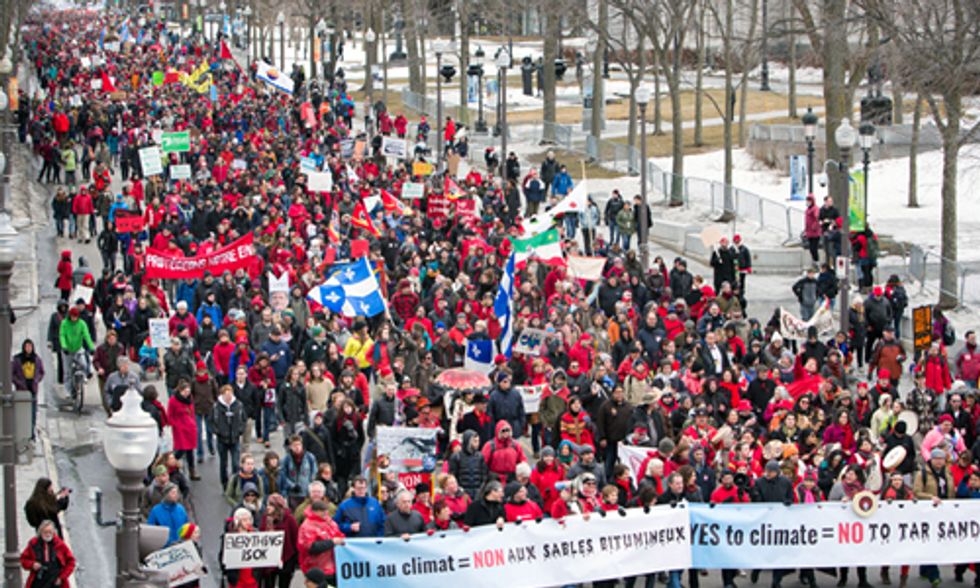 Thousands of Canadians marched through the streets of Québec City, Québec on Saturday to demand action from officials who are meeting next week to discuss climate change issues.

More than 20,000 citizens marched in Quebec City on April 11 calling on Premiers and the Federal Government to Act on Climate. Photo credit: ©Greenpeace/Robert van Waarden

The organizers called on premiers who will be attending the meeting on April 14 to curb tar sands growth, which critics say would endanger Canada's land and water and fuel climate change.

At their previous meeting in January, the premiers discussed TransCanada's proposed Energy East tar sands pipeline, which would transport more than 1 million barrels per day of toxic oil from Alberta to the Atlantic Ocean. The completion date for the project was extended this month to 2020 after TransCanada was forced to kill plans for a marine terminal on the St. Lawrence River in Cacouna.

"Premiers need to get on the right side of history, reject extreme energy projects and help pave the way to more equitable, sustainable ways of being," said Maude Barlow, Council of Canadians chairperson, ahead of the march.

Karel Mayrand, Québec director of the David Suzuki Foundation, told the Globe and Mail on Saturday, "You can either protect our climate or you can develop the tar sands, but you cannot do both at the same time."

Thousands of Canadians marched through the streets of Québec City, Québec on Saturday to demand action from officials who are meeting next week to discuss climate change issues. Photo credit: Act on Climate

"We're worried that premiers will meet and say yes to protecting our climate and, at the same time, yes to oil infrastructure such as pipelines and expanding oil sands production," Mayrand added.

Climate activism in Canada is not without its risks. According to Canadian law enforcement documents leaked by Greenpeace in February, the Royal Canadian Mounted Police view climate activists as a potential threat to national security and say police "must be prepared to confront" growing opposition to fossil fuels.

Adam Scott of Environmental Defense told the Globe and Mail that making progress without cooperation from the government will be difficult. "We can’t see effective climate action in Canada without the federal government," he said.

Still, the activists have hope, with solidarity movements also taking place in Halifax, Vancouver, and parts of Ontario.

Québec premier Philippe Couillard called on provincial and territorial colleagues to attend Tuesday's summit to "pave our way to the Paris conference of 2015 with concrete commitments."