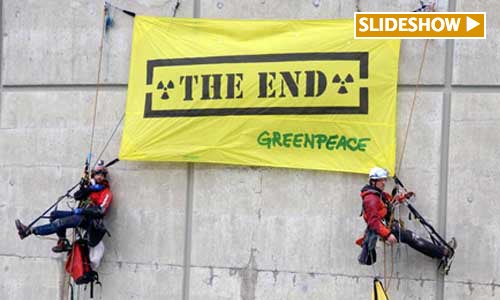 In Switzerland, about 100 Greenpeace activists from six different countries entered the station at Beznau. They climbed the superstructure of the reactor and hung banners demanding the immediate shut-down of the 45 year old power plant while a paraglider circled the sky.

In Sweden, twenty activists entered the the Oskarshamn nuclear power plant and four climbers unfolded a massive banner in the shape of a “pension notification letter” from the top of the reactor roof. Sweden has four of the ten oldest and most worn reactors in Europe.

In Spain, 30 activists started to “decommission” the Garoña nuclear power plant. Protestors chained themselves to the gates and unfolded banners as workers from the plant sprayed them with water cannons.

In the Netherlands, an animation of stress cracks and crumbling was projected onto the Borselle plant in the South of the country.

In France a “decommissioning team” symbolically blocked the entrance to the Bugey station and started to “decommission” the plant by taking down signs.

Eighty activists staged a decommissioning of the Tihange reactor in Belgium. A projection was made on a cooling tower, at the same time, several “decommissioning teams” entered the site, including ten climbers, who unfolded banners between the chimneys of the reactors. Fifty activists also placed a large nuclear barrel and various smaller barrels at the main entrance.

Watch this video of that action:

Here’s a map where the actions took place: 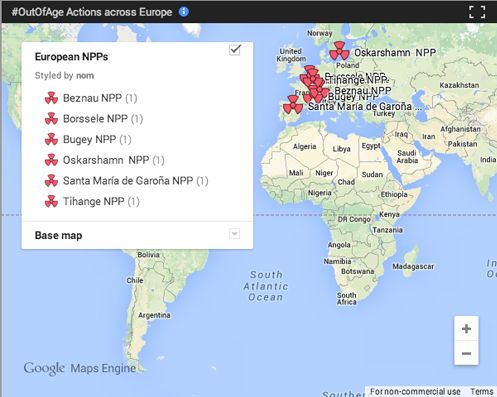