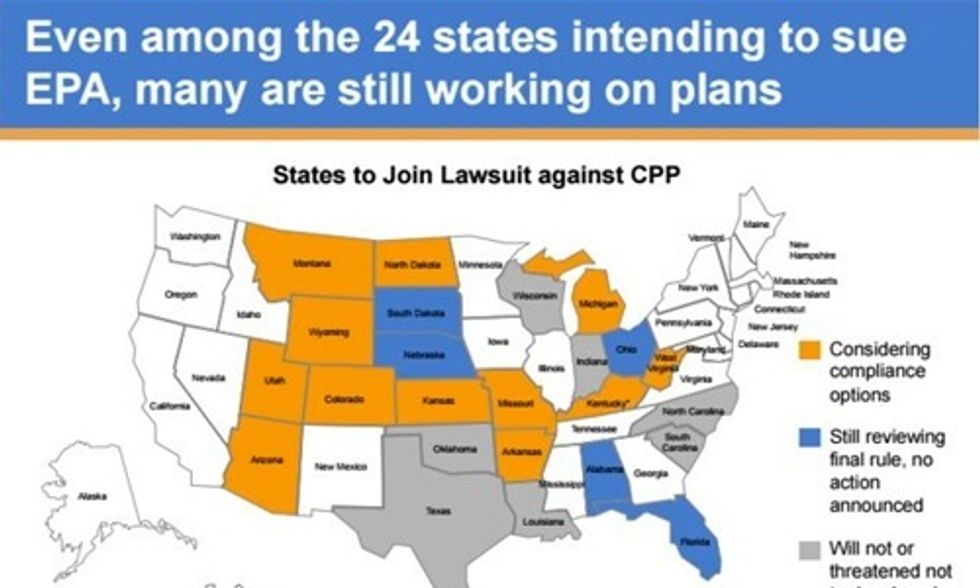 Twenty four states and a coal company filed lawsuits yesterday over President Obama's Clean Power Plan, which was formally published Friday. "The Clean Power Plan, which requires states to reduce carbon dioxide emissions from power plants 32 percent by 2030, is intended to help slow climate change resulting from the burning of fossil fuels," explains InsideClimate News. "The plan has been the target of legal challenges and legislative campaigns since it was proposed in 2014 and finalized in August."

The two dozen states and Murray Energy have accused the U.S. Environmental Protection Agency (EPA) of "going far beyond the authority Congress granted to it," according to The Hill. They are calling on the Court of Appeals for the District of Columbia Circuit to overturn the rule, and they are asking the court to "immediately stop its implementation" while the lawsuit plays out."

West Virginia Attorney General Patrick Morrisey, who is leading the charge, called it “the single most onerous and illegal regulations that we’ve seen coming out of DC in a long time." He added, "the EPA cannot do what it intends to do legally.”

The EPA maintains that its rule is legal. “The Clean Power Plan has strong scientific and legal foundations, provides states with broad flexibilities to design and implement plans, and is clearly within EPA’s authority under the Clean Air Act,” U.S. EPA Administrator Gina McCarthy said in a statement.

Fifteen other states, including Washington, DC, say they plan to intervene on behalf of the EPA, arguing that the rules are not only legal, they are necessary. “Significant reductions in these emissions must occur to prevent increases in the frequency, magnitude and scale of the adverse impacts of climate change,” wrote New York Attorney General Eric Schneiderman in a letter to the EPA in August.

Though the rule's opponents cry foul, "officials in practically every state have been doing some amount of work [to comply with the standards]," Kyle Danish, a partner at Van Ness Feldman law firm, told InsideClimate News. Danish is helping the industry comply with the regulations and says, "many states have been taking a number of steps to start putting together compliance plans."

The arguments will likely come down to debates over whether the EPA has overstepped its jurisdiction by allowing flexible state plans to include “outside the fence” measures such as efficiency and renewable energy, and whether another section of the Clean Air Act, which governs mercury emissions from power plants, renders the EPA unable to also regulate carbon.

Michael Myers, assistant attorney general of New York, disputed both those claims. The mercury or carbon argument “doesn’t make any sense,” Myers told ThinkProgress. “The contention that Congress intended the EPA to pick one of those, not both of them, is not an argument that is going to prevail in court.”

Mary Anne Hitt, director of the Sierra Club's Beyond Coal campaign, said in a statement:

Time and again, we’ve seen Big Polluters and their allies attack the lifesaving protections that let our loved ones breathe easier and keep our clean energy economy thriving, and this challenge to the Clean Power Plan is no different. The Clean Power Plan will help us move toward a new era of clean, affordable energy that protects the health of our communities, grows our economy and signals to the rest of the world that the U.S. is serious about combating the climate crisis ahead of international negotiations in Paris later this year. It’s a huge step in taking action against climate disruption by pulling together state-level carbon pollution reduction plans and holding polluters accountable for doing their fair share.

They can throw everything and the kitchen sink at this standard, but the Clean Power Plan’s push to cut dangerous carbon pollution from power plants for the first time ever is based on a law passed by Congress and upheld by the Supreme Court, and it has the overwhelming support of the American people.

Many have noted that it's no surprise that most of the opponents come from coal-heavy states and that all but three of those states (Kentucky, Missouri and North Carolina) have Republican attorneys general.

Almost all of the states suing the U.S. EPA rely heavily on coal and have Republican attorneys general. Photo credit: Tim McDonnell

Rhea Suh at the Natural Resources Defense Council says, "Big Coal and its political allies" are "not going to get away with it — the stakes are too high for that."

We just finished the hottest summer since global record-keeping began in 1880, with world land and sea temperatures 1.53 degrees Fahrenheit above the 20th-century average. Last year was the hottest year ever recorded. And 19 of the hottest years on record have all occurred in the past two decades.

Small wonder that seven in 10 Americans understand the planet is warming. No surprise, either, that the pool of doubters who dismiss the definitive science on the issue has reached a shallow 16 percent of the population— the lowest in modern time. Those are the findings of a poll taken in September by the University of Michigan and Muhlenberg College, another sign the tide is turning toward real action on climate change.

Joanne Spalding, chief climate counsel for Sierra Club, told Think Progress: “We are confident that the Clean Power Plan is on legally sound footing. EPA does have the authority. The law says so and the Supreme Court has said so, twice. The matter, I believe, should be put to rest."