24 Solid Hours on the Keystone Battle 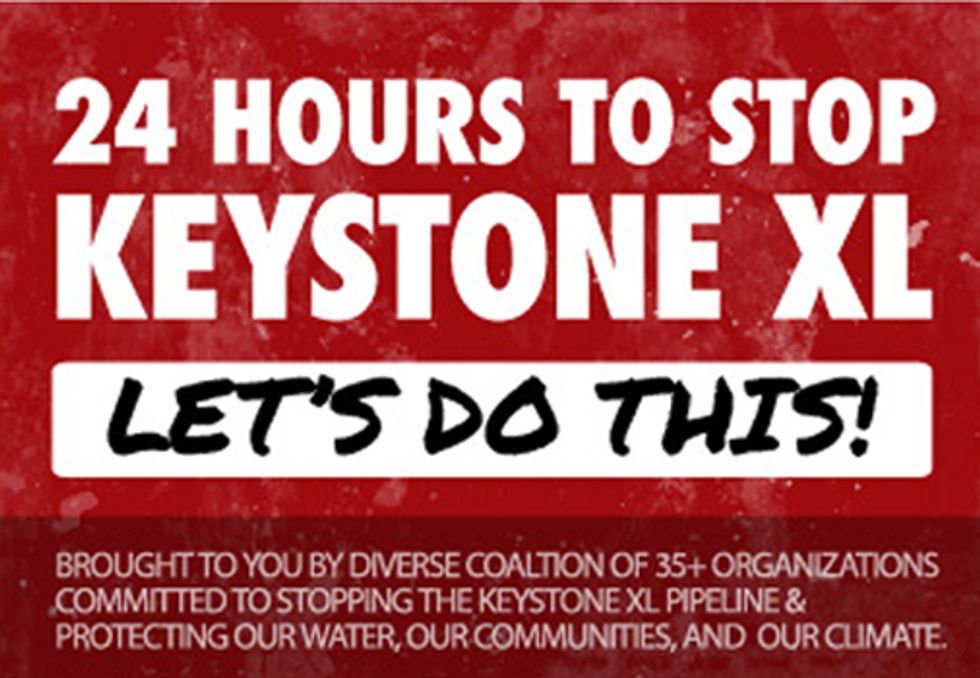 At least for now, the battle over the Keystone Pipeline—the most visible environmental cause in many years—has moved from the scarred boreal forest of Alberta and the Sand Hills of Nebraska to the halls of Congress. Or rather, it's moved to send button on your email application, because that's the best way we've got right now to stiffen the spines of our Senators.

Beginning at noon today, the progressive community will focus for 24 solid hours on the Keystone battle. We'll try to generate half a million emails to the Senate—the most concentrated burst of environmental advocacy this millennium. We'll know if it works if the Democrats who control the chamber do one simple thing: back their president.

Barack Obama did the brave thing. He stood up to the American Petroleum Institute (a.k.a. big oil) and their explicit threat to exact 'huge political consequences' unless he granted Keystone an immediate permit. And the GOP did the expected thing—all along they've voted with near unanimity to speed up the pipeline. That's par for the course from a party awash in oily money—a party whose leaders vie to denounce global warming as a hoax, and whose current frontrunner believes that thanks to the Environmental Protection Agency Americans are living through 'a reign of environmental terror.'

But the Senate is in the hands of a Democratic majority, whose leader Harry Reid has said the right things about Keystone—namely that the tarsands it connects to are an "unsustainable supply of dirty and polluting oil." These Democrats know that the biggest labor unions in the country are backing the president, and they know that every environmental group is firm in its opposition, from the corporate friendly Environmental Defense Fund to the corporate unfriendly Rainforest Action Network. And yet these Senators still wobble—we keep hearing rumors that one or another of them will cut a deal with the oil industry.

In fact, one already has. Joe Manchin, of West Virginia, has said he'll vote for Keystone. And what do you know—he's taken more money from the fossil fuel industry than any other Democrat in the chamber. Many of the rest of the Democrats have taken industry money too, but usually far less than the Republicans. My guess is that they actually want to do the right thing, but they're scared—scared that the oil industry will run ads against them at election time, scared that no one will come to their defense. In a way it's kind of sad to see Senators living in fear, but that's how it works.

And so to the keyboards. We've been to jail, we've marched on Washington; this week it's pixels and keystrokes. This electronic blitz is an effort to show Congress that there's support out there for doing the right thing—that the American people know the stakes and that they want to see a little bit of the president's courage on this issue reflected in the Senate. This Congress is clearly not going to solve global warming—no one expects Harry Reid to work miracles, converting implacable Republican opponents. But they can clearly hold the line if they want to. Maybe a letter or two—or half a million all at once—will nerve them up.

Click here to send your email to your Senators.