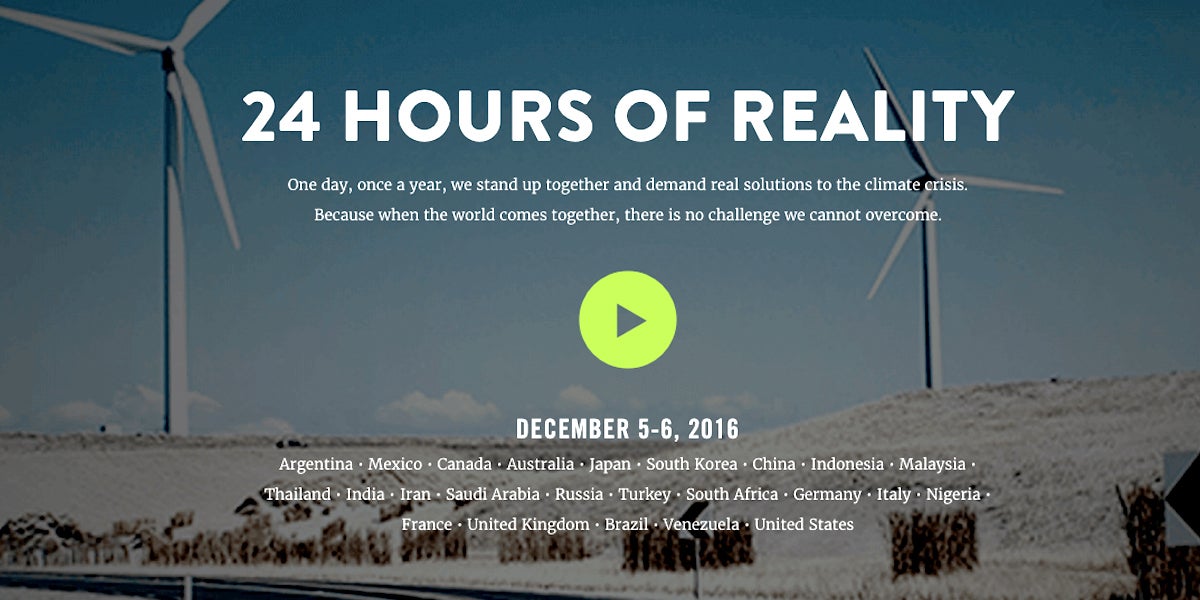 On Dec. 5-6, former U.S. Vice President Al Gore and The Climate Reality Project will host the sixth-annual 24 Hours of Reality broadcast—24 Hours of Reality: The Road Forward—a star-studded, 24-hour live event focused on climate solutions watched by millions of viewers around the world.

You can watch the entire 24 Hours of Reality right here, live, starting at 6 p.m. EST:

“The Paris agreement has fundamentally and permanently altered what the world thought was possible in terms of addressing the climate crisis,” Gore said.

“The conversation no longer hinges on if we can do something to address climate change. Instead, world leaders, environmental activists and ordinary citizens are asking what we can do to solve this crisis and how we can work together to do it. This year’s 24 Hours of Reality will help the global community envision the Paris agreement coming to life, as we look at the elected officials, business leaders and activists that are making climate action a reality in countries around the world.”

As with the previous years’ programs that have rallied millions to demand action on climate, this year’s broadcast will feature special appearances and interviews with celebrities, musicians, thought leaders and environmental experts. The broadcast also marks the world premiere of an exclusive, never-before-seen aerial performance imagined by Cirque du Soleil.

Each hour of the broadcast will explore the landscape of the climate crisis in one of the 24 largest CO2-emitting countries, delving into its commitments to the climate fight, the region’s unique challenges related to climate change and most importantly, how each country can do its part to make the goals of the Paris agreement a reality.

The U.S. was instrumental in orchestrating the Paris agreement, but the country faces a lot of uncertainty on climate issues after the November election. 24 Hours of Reality: The Road Forward will look at how federal initiatives, including the Clean Power Plan, the Climate Action Plan and fuel efficiency standards, have been important in reducing emissions and moving the U.S. toward a clean energy economy. The hour will also focus on the the transformation of the U.S. electricity sector and the increasing importance of local, state and private sector action on climate.

When the world comes together, there is no challenge we cannot overcome. Tune into #24HoursofReality December 5-6 #TheRoadForward pic.twitter.com/ScmAfXfo47

“24 Hours of Reality: The Road Forward is a celebration of how far we have come in the year since COP 21, but also a reminder of the hard work that lies ahead,” said Ken Berlin, president and CEO of The Climate Reality Project.

“Ensuring global access to clean and affordable energy and climate-resilient infrastructure for people around the world will not be an easy task, but the Paris agreement has provided us with the first step in the right direction. We’re excited to share stories of climate action and progress from the 24 largest-emitting nations on Earth and we hope to inspire people to take up the mantle of climate action within their own communities.”

Participants in this year’s event, include: