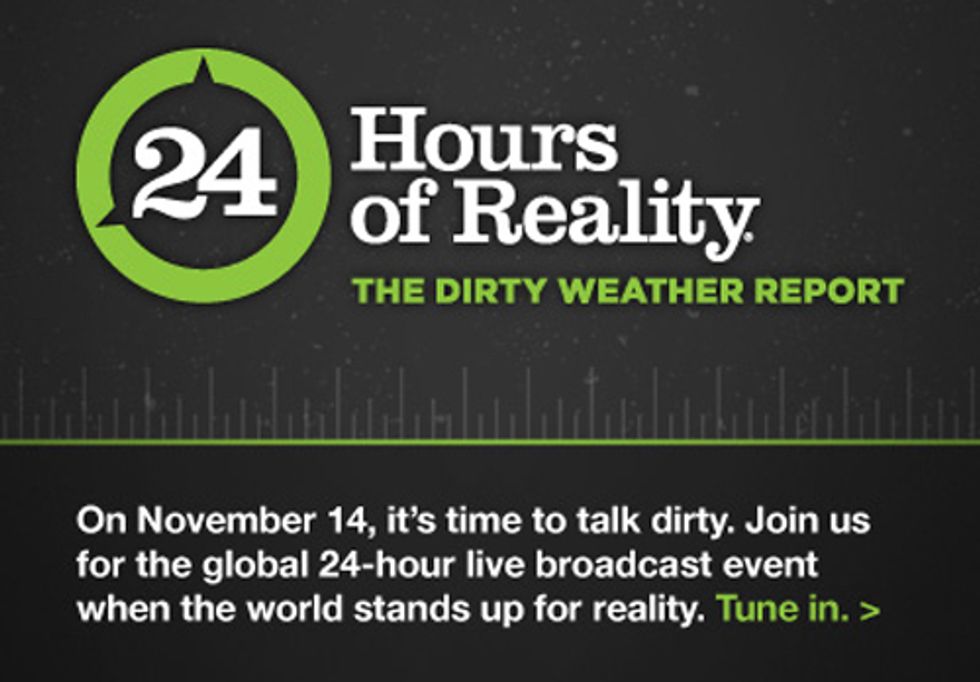 At this year’s Social Good Summit, The Climate Reality Project, founded and chaired by former Vice President Al Gore, announced it will hold its second annual online event, 24 Hours of Reality: The Dirty Weather Report, to connect the dots between global climate change and the extreme weather we’re experiencing.

Gore and Climate Reality President and CEO Maggie L. Fox made the announcement at the 2012 Social Good Summit, a conference hosted by Mashable, the 92nd Street Y, the United Nations Foundation, Ericsson, United National Development Programme, and Bill & Melinda Gates Foundation. Gore identified the power of social media to connect and mobilize individuals across the world to communicate about the reality of climate change and advance solutions.

“We all know that we have to create a cultural and political consensus that results in a movement of individuals demanding action on climate change,” said Gore. “The Climate Reality Project is purpose-built to help spark and fuel such a movement. We are using the power of social media to amplify individual voices and connect people across the globe. Our message is very simple: Enough is enough. Climate change is happening now, and we must act to stop it and seize the opportunities inherent in the solutions.”

“The amount of money spent on propaganda to mislead the public about the reality of climate change is staggering,” said Fox. “As the social media community knows, the best antidote is to empower people with the facts. We have a scientific consensus around the climate crisis, and with the help of the online community, we can mobilize millions and create the cultural consensus that will be critical to effect change.”

From Nov. 14-15, 24 Hours of Reality: The Dirty Weather Report will draw real-world connections between the climate crisis and the realities of extreme weather around the world. The entire event will be broadcast live over the Internet by Ustream, and can be viewed at www.climaterealityproject.org.

24 Hours of Reality: The Dirty Weather Report builds on the success of 2011’s seminal event, 24 Hours of Reality, which garnered more than 8 million views, 120 million Twitter impressions and more than 336,000 viewing hours. Over the last year, the frequency and severity of extreme weather events has underscored the urgency of the climate crisis.

24 Hours of Reality: The Dirty Weather Report will build on last year’s efforts by showcasing how climate change impacts are moving from scientific projections to backyard realities, helping those around the world connect the dots between the climate crisis and the extreme weather affecting their communities.

The Dirty Weather Report will move around the world, bringing voices, news and multimedia content from all 24 time zones. The Dirty Weather Report’s format will intersperse expert commentary from its New York City studio with musical performances, man-on-the-street reports from the ground, crowd-sourced videos about how weather is altering our lives and homes and profiles of communities developing solutions to the climate crisis.