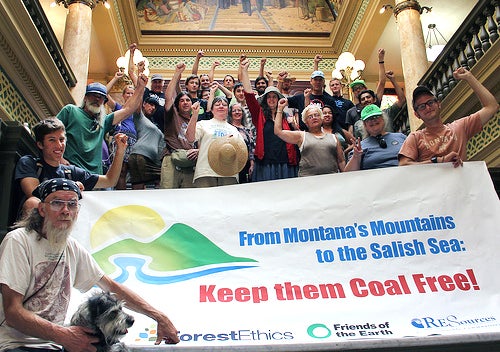 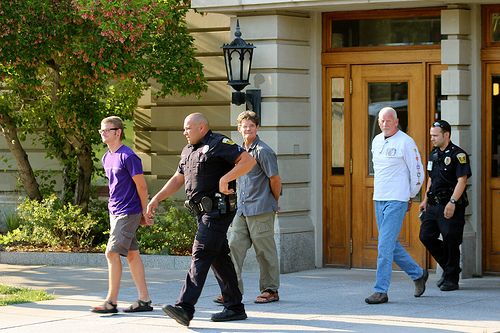 Over the course of a week, 23 activists were arrested, in a sustained act of nonviolent civil disobedience aimed at drawing attention to the deadly impacts of coal exports, and raising the stakes in the fight for a clean energy future.

Last week, the Coal Export Action made history in Montana with 23 activists arrested in a sustained act of nonviolent civil disobedience aimed at drawing attention to the deadly impacts of coal exports and raising the stakes in the fight for a clean energy future.

Getting arrested is never a goal in itself—in fact, it’s something most people would rather avoid. But with climate change crisis worsening, and coal mining and transport threatening Montana’s agriculture and the health of communities across the greater Northwest, we simply have to raise the bar in the struggle to stop coal exports. We’ve tried lobbying, petitioning, and turning out to public hearings, and decision makers like the Montana Land Board have continued to side with Big Coal over communities.

When a government fails to respond to the people, we have no choice but to take matters into our own hands, and peacefully break laws enacted by that government. That’s what 23 people did last week in Montana. We raised the bar for climate activism in this state, and showed we’re willing to put our bodies on the line if that’s what it takes to stop a disaster.

Boy, did that feel good.

But the 23 arrests are only part of the story. Hundreds of people participated in the Coal Export Action in some way over the course of a week. We marched to the offices of the state Department of Environmental Quality, and spoke with the DEQ director. We delivered thank you letters to the two members of Montana’s Land Board who bravely voted against leasing Otter Creek to Arch Coal in 2010. And we protested outside the Montana Coal Council office in Helena…needless to say, they weren’t happy to see us.

Now the action is drawing to a close: the last major piece will be today, Aug. 20, when we’re asking people to show up at the Helena Court House at 9 a.m., to support the last group of arrestees being arraigned.

But in so many ways, this is just the beginning. Arch Coal has submitted their official application to mine the Otter Creek coal tracts, and we have from now until the land board makes a final decision on the permit, to stop that project moving forward. Last week’s action made sure we started this phase of the fight against coal exports with a bang, and in months ahead we’ll finish the job.

Expect to hear from the Coal Export Action organizing team and our partner organizations about how you can keep the pressure up in the coming months. We’ll be organizing actions and events throughout Montana and the Northwest, putting pressure on the government bodies and individuals who make the coal industry’s reign possible.

Stay tuned. We’ll see you in the streets and in the halls of government.