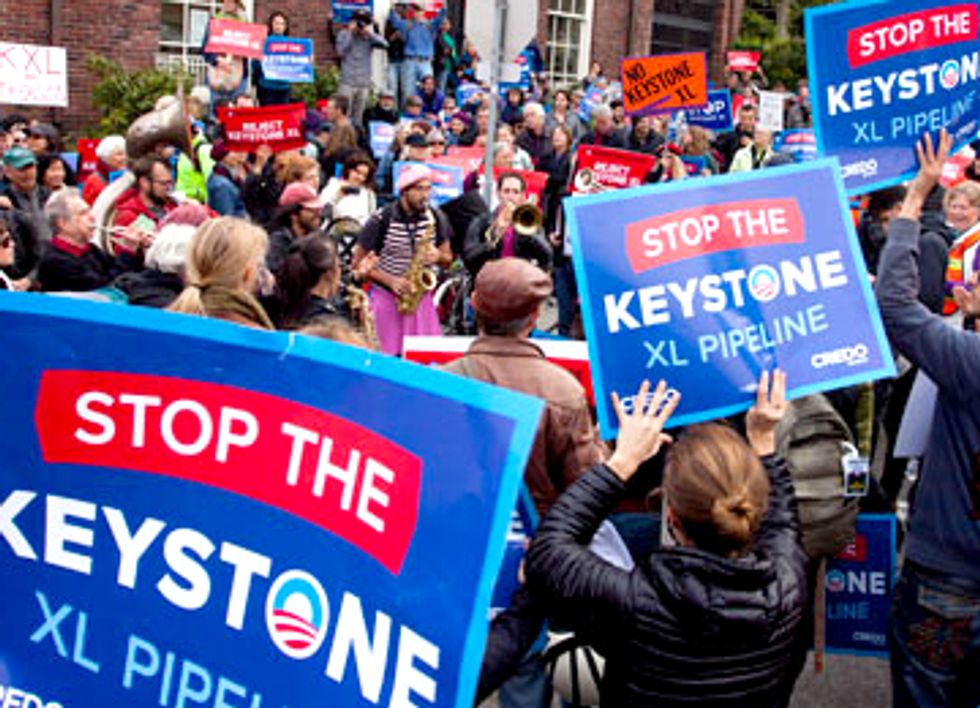 In protest of the Keystone XL pipeline, 22 activists were arrested today when they staged a sit in at the State Department in President Obama’s hometown of Chicago. The activists arrested today included former Obama staffers, donors and volunteers who helped elect the President in 2008 and 2012 and want the President to make good on his commitment to fight climate change. The action was organized by CREDO, Rainforest Action Network and the Other 98%.

Activists stage a sit in today at State Department in Chicago, IL, in protest of the Keystone XL pipeline. Photo credit: #NOKXL/Kira Mardikes

Many activists at today’s event wore shirts with President Obama’s quote committing to take action on climate change: "If Congress won’t act soon to protect future generations, I will.”

While President Obama’s activism arm, Organizing for Action (OFA), has called out climate deniers, the President has not committed to any course to actually address climate change, nor has he rejected the Keystone XL pipeline, the approval of which would dramatically undermine any climate agenda the President may set.

“I never thought I’d be back in Chicago to risk arrest in order to get President Obama to do the right thing on climate change,” said Elijah Zarlin, formerly a senior national email writer on President Obama’s 2008 campaign. “But the fact is, President Obama hasn’t made good on the commitment he made to his staff and supporters to fight climate change. If the president wants our help to push his agenda forward in the second term, Keystone XL is a make or break moment.”

"As a grandfather and avid supporter of President Obama, I respect his words offered in response to the climate crisis but we are out of time for just words," said Rev. Terrence Gallagher, an Obama donor risking arrest at today's sit in. "I am risking arrest if that is what is necessary to move him to the action of denying the permit for the Keystone XL pipeline. The future well-being of our kids deserves no less of a response."

"Delivering Virginia for the President in 2012 was a huge honor. I put in 14 and 16 hour days because I, like most of my generation, believe in the president and I believe he’ll do the right thing on climate and reject the Keystone XL pipeline," said Andrew Nazdin, formerly Virginia's deputy training director for OFA in 2012.

“People are ready for their government to take urgent action on the climate and they are willing to risk arrest to get it,” said Amanda Starbuck, energy and finance program director at Rainforest Action Network. “Today’s sit in marks the start of what tens of thousands will be prepared to do if the president doesn’t stop the Keystone XL pipeline, and begin defending our country from climate change.”

The location of today’s sit in is notable not just because it is President Obama's hometown, and the location of his activism arm, OFA, but because the State Department is the agency currently engaged in finalizing the review of Keystone XL, a process that has been wrought with conflict of interest and insufficient science.

More than 62,000 people have signed the group’s Pledge of Resistance to risk arrest in peaceful, dignified civil disobedience if President Obama’s administration issues a draft National Interest Determination recommending approval of the Keystone XL pipeline. Today’s action is the first of a number of civil disobedience actions the groups are planning throughout the summer to demonstrate to the president that they are serious in their pledge, and that it is politically unfeasible for him to approve Keystone XL.