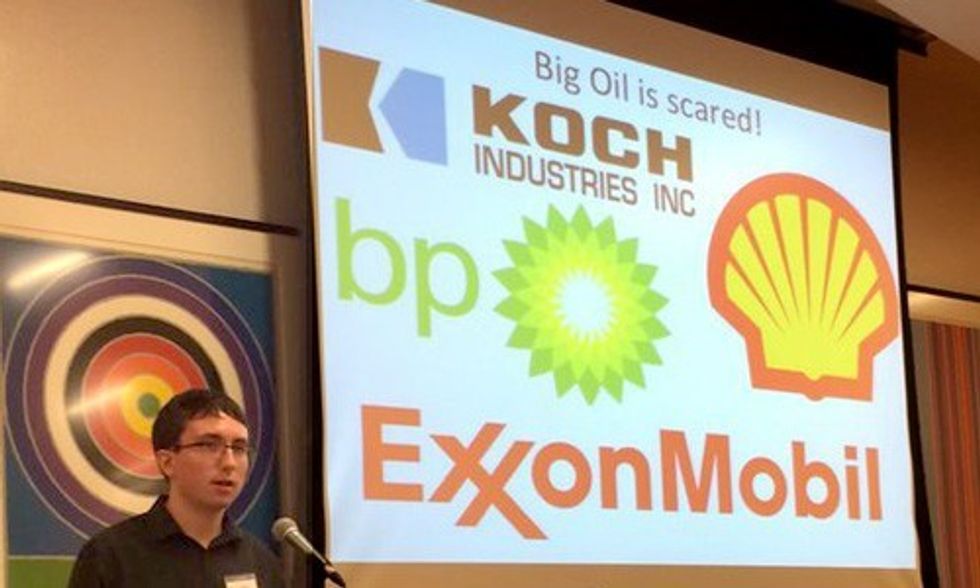 Twenty-one young people from around the country are working to keep the world’s largest fossil fuel companies from intervening in their constitutional climate change lawsuit. Last week, the youth opposed the industry’s proposal to intervene as defendants in their case.

“These organizations were not named as defendants in our complaint,” Phil Gregory, of Cotchett, Pitre and McCarthy said. Gregory serves as one of the attorneys for the youth plaintiffs. “The fossil fuel industry understands how significant our case is. They want to join the federal government in attempting to defeat the constitutional claims asserted by these youth plaintiffs. The fossil fuel industry and the federal government lining up against 21 young citizens. That shows you what is at stake here.”

The lawsuit asserts the federal government has violated the youngest generation’s constitutional rights to life, liberty and property. It also claims the government failed to protect essential public trust resources by facilitating the exploitation of fossil fuels. The youth have asked the courts to order the federal government to prepare and implement a science-based national climate recovery plan.

The fossil fuel powerhouses call the youth’s case “extraordinary” and “a direct threat to [their] businesses.” They claim “significant reduction in [greenhouse gas] emissions would cause a significant negative effect on [their] members by constraining the sale of the product they have specialized in developing and selling.”

Victoria Barrett, 16-year-old plaintiff and fellow with Alliance for Climate Education, is participating in the climate talks in Paris advocating for science-based climate recovery plans. Barrett became a plaintiff because she was tired of the U.S. government sacrificing her future by allowing fossil fuel companies unbridled economic growth.

“Fossil fuel companies continue to show complete disregard for my future and the future of my generation,” Barrett said. “They have put my constitutional right to a certain quality of living at risk and continue to completely bulldoze over any real solutions for a sustainable world. These companies are focused on short-term goals, without thinking of their lasting effects on humanity. Fossil fuels are the energy of the past and I see no reason why these companies would not want to pride themselves in looking to the future.”

In seeking to join the case, AFPM, API and NAM argue the court should focus on short-term economic benefits over a stable climate and healthy environment for future generations. The industry claims that “reducing greenhouse gas emissions in order to bring atmospheric carbon dioxide levels down to 350 parts per million would abate some of the future risks of climate change, those reductions would nevertheless not be ‘appropriate’ if the future potential benefits would be outweighed by, for instance, enormous losses in productivity and economic development.”

In a declaration on behalf API’s motion to intervene, Howard Feldman claims, “A sudden and significant reduction in allowable GHG emissions from the combustion of fossil fuels could have a significant negative effect on the profitability of many of API’s members.” However, Jack Gerard, API’s president and CEO, presented a different picture in a press release on API’s website: “The facts are clear … by embracing our nation’s energy renaissance, we can lower costs, clean the air and create more jobs here at home while providing an example to the world.”

AFPM echoed API’s concern in a declaration of David Friedman of AFPM, stating, “If Plaintiffs succeed in eliminating or massively reducing U.S. conventional fuel consumption and imposing other severe restrictions on GHG emission limits, the impact on AFPM’s members will be significant and varied.”

“We oppose the world’s largest fossil fuel polluters, including Exxon and Koch Industries, arguing that young people don’t have a constitutional right to life if it means reducing fossil fuel use,” said Julia Olson, executive director for Our Children’s Trust, also counsel in the litigation.

“Given what our president just said at the UN climate talks in Paris, a renewed alignment between our government and the fossil fuel industry could not be less welcome. This case asks the court to order what the industry fears most: a national plan using the best science we’ve got to try to leave clean air and a healthy climate to our kids.”