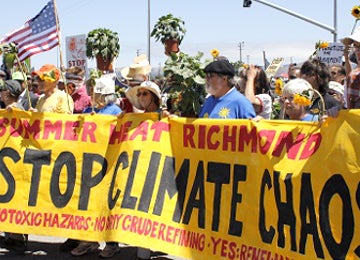 Two thousand eight hundred high-spirited and sunflower-carrying demonstrators—numbers estimated by the Richmond Police Department (RPD)—converged in front of the main gate to Chevron’s refinery in Richmond Saturday to demand that the oil giant address ongoing health and safety concerns, stop processing extreme crude like tar sands, and cease its political and taxation manipulations. 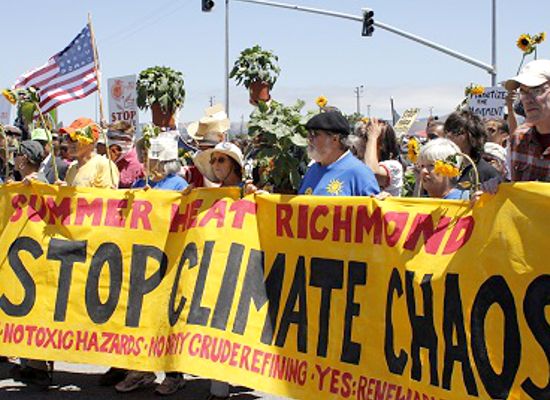 The sweeping, colorful protest commemorated the explosion and fire at the Chevron refinery last year on August 6 that sent 15,000 area residents to the hospital.

An unprecedented gathering of labor, public interest and climate justice groups, led by a contingent from Idle No More, marched two miles to the refinery, where they heard speeches by community leaders including Mayor Gaye McLaughlin of Richmond and 350.org founder Bill McKibben.

The crowd cheered and chanted, “We are unstoppable. Another world is possible” in support as 208 people (as reported by the RPD) sat down in front of the Chevron gates and were arrested in a collective act of civil disobedience. They were cited for trespassing and later released. 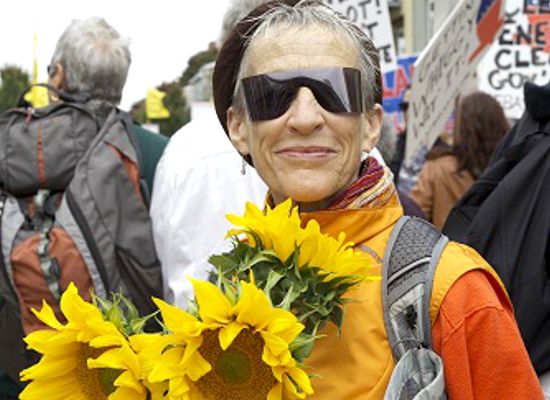 Many of them carried eight-foot sunflower-yellow banners proclaiming resistance to the fossil fuel industry and support for clean energy. The energy was high, and the sun spilled down in abundance. It was an extraordinary show of people and sunflowers—over one thousand of them. (Sunflowers were chosen because of their prominent role in bioremediation after oil spills. They are also known for drawing heavy metals from the soil.)

“A very successful protest,” said Richmond Police Chief, Chris Magnus. “People made their point and conducted themselves in a thoughtful way. They are part of our constituency.”

Magnus added, “We don’t work for Chevron. We work for the community.” 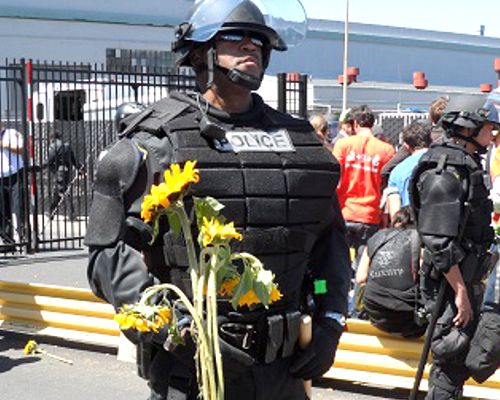 “On this day we remember the bomb that was dropped on Hiroshima,” said Andrés Soto, a Communities for a Better Environment organizer, who fired up the crowd with his reminder of the importance of August 6. “But this is also the day that Chevron dropped a bomb on the people of Richmond. Chevron is the epitome of the evil empire, and we determined to take back our city and our environment.”

The day began with an unexpected expression of solidarity from the government of Ecuador in the form of a full one-page ad in the San Francisco Chronicle:

The people of Ecuador, who have been in a long-running dispute with Chevron over the dumping of toxic waste in the northern part of the Amazon region of their country, stand with the people of Richmond on their day of protest about the disaster and its aftermath.

Demonstrators painted a giant, 20-foot sunflower on the road in front of the Chevron refinery and erected a molasses-streaked altar to the plant, animal and human life impacted by oil spills and other environmental destruction caused by the oil industry.

The usual Chevron signage at the front entrance was replaced by a facsimile reminding that Chevron is the number one greenhouse gas emitter in California, that last year’s profits were $26.2 billion and that its negligence sent 15,000 people to the hospital after last year’s fire. 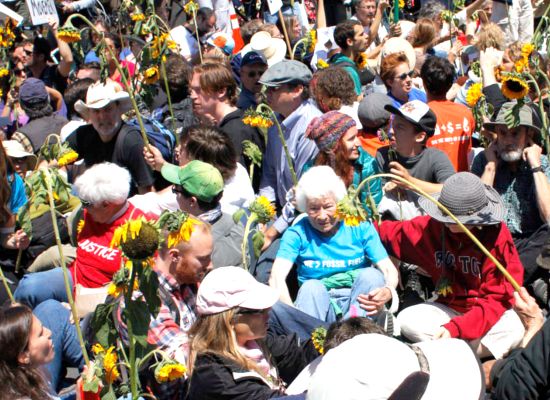 Protestor Marg Hall said that she was deeply honored to be arrested at the Chevron gate. An activist with the disabled and chemically injured community, she said she was there to send the message that “corporate greed makes people sick.”

A local health worker, Maggie Mullen, who is employed by the hospital that treated 15,000 people after the incident, said “I am here because I saw so many people impacted and Chevron is doing so little in the aftermath.”

Steven Ongerth said that he got arrested “in order to call attention to the need to entirely transform society. We have to stop the destruction at the point of destruction.”

Several elderly people were amongst the arrested. “We should declare war on climate change—the corporations, the little people, all of us,” said 90 year-old Ellen Small. “The situation is desperate, and I am here to help call attention to that.”