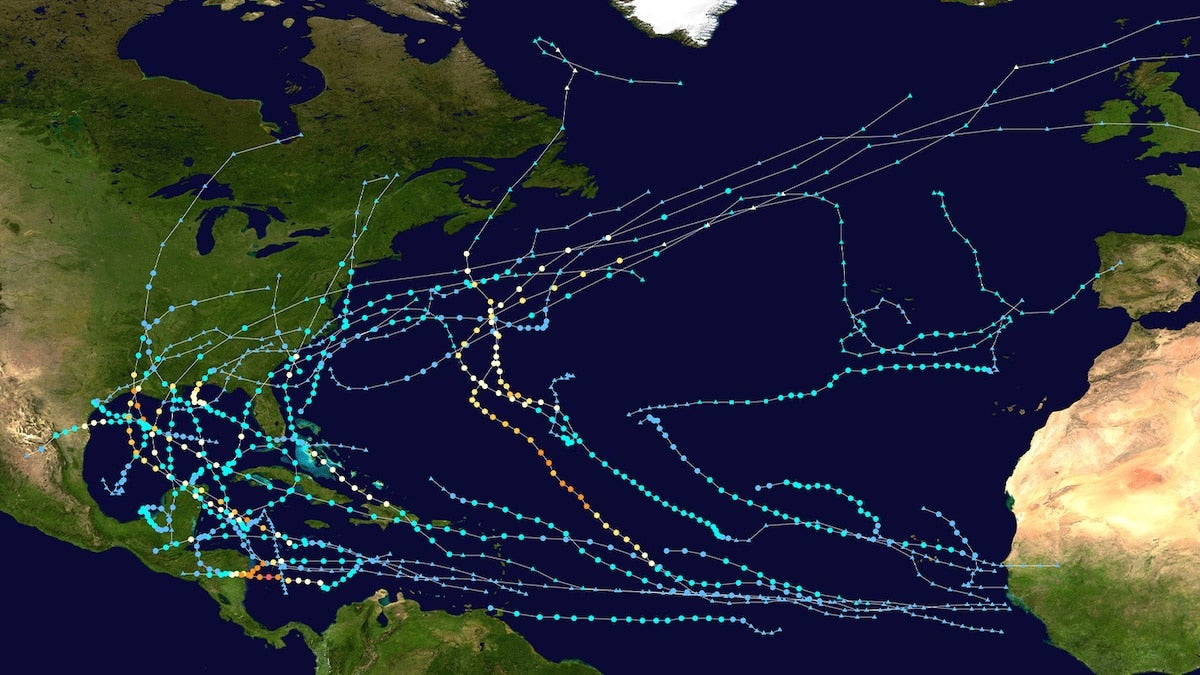 As we reach the official end of hurricane season, 2020 will be one for the record books. Looking back at these long, surprising, sometimes downright crazy past six months (seven if you count when the first named storms actually started forming), there are many noteworthy statistics and patterns that drive home the significance of this hurricane season, and the ways climate change may have contributed to it. 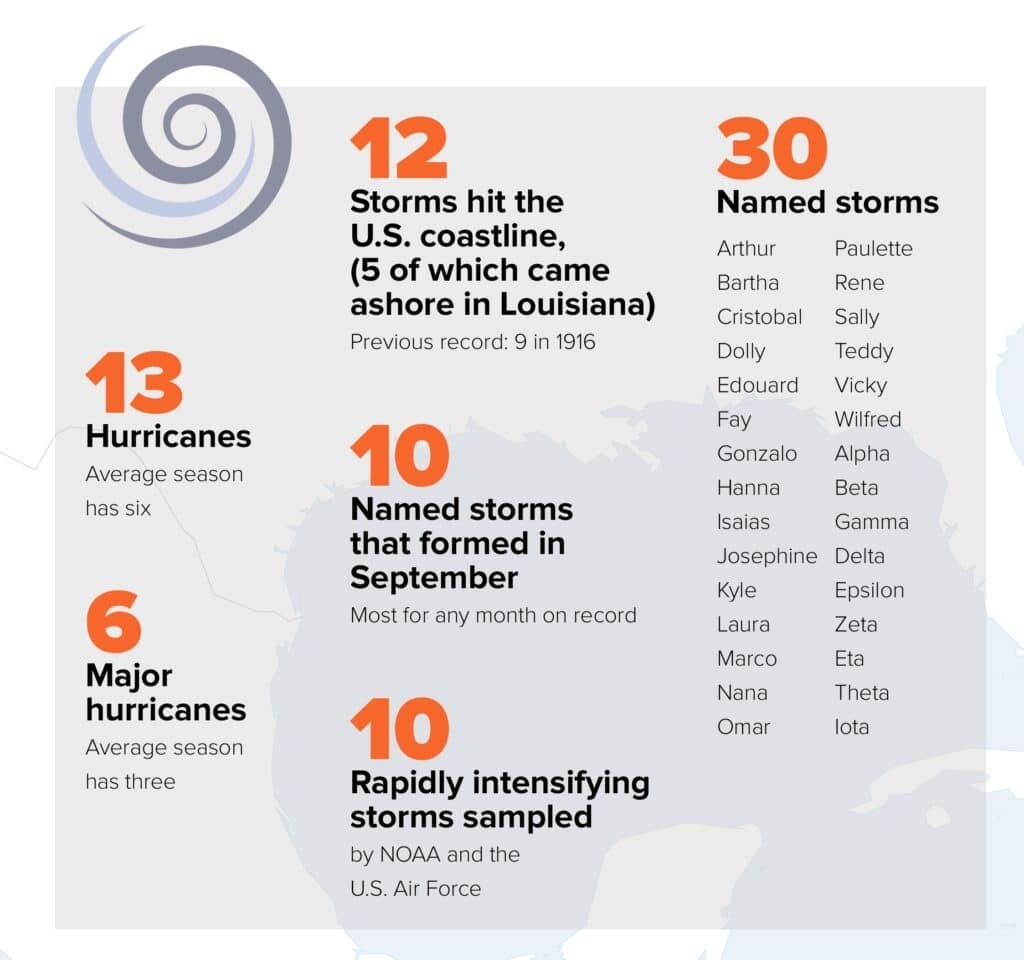 Hurricane activity this year broke some records. As of today, we have had a record 30 named storms, of which 13 turned into hurricanes. The first two, Arthur and Bertha, even formed before June 1, the official start of hurricane season. The third formed on June 1 itself.

This is also only the second time in tropical storm naming history, the first time being in 2005, that the National Hurricane Center had to use the Greek alphabet letters to name storms after the regular list of names was exhausted. As the season progressed, storms generally got stronger – the image below gives a good idea of this progression. While a pattern like this is not unseen, it certainly is not usually this striking (for instance, see timelines of 2005, 2017, 2018, and 2019).

Fortunately, the high level of activity did not translate into a higher number of major hurricanes this season. The August updated forecast from the National Oceanic and Atmospheric Administration (NOAA) had called for 19-25 named storms, with 7-11 turning into hurricanes, 3-6 of which would be major (Category 3 or higher). The total number of named storms and hurricanes went up, but the latter prediction did not change from the original forecast released in May (see infographics below). 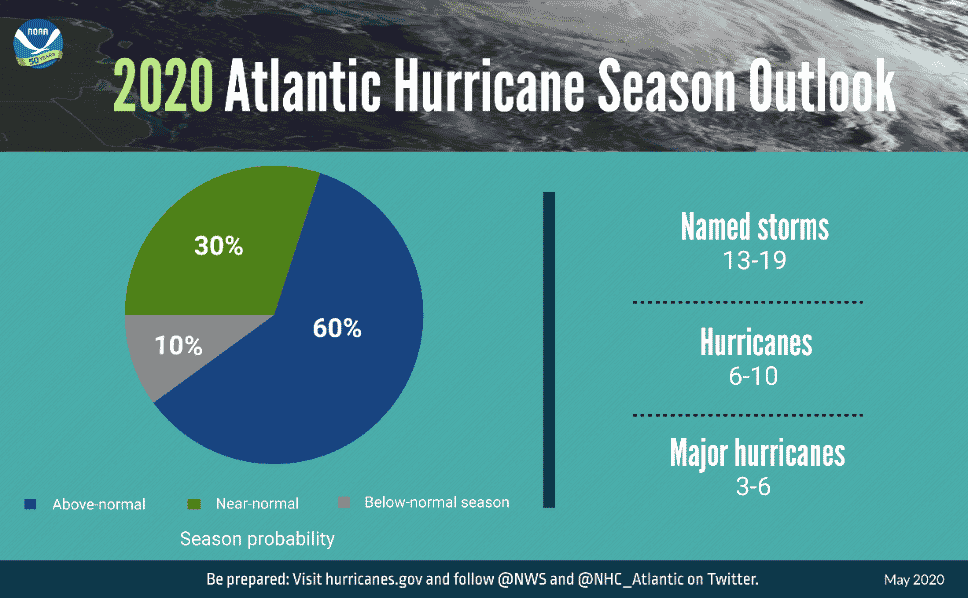 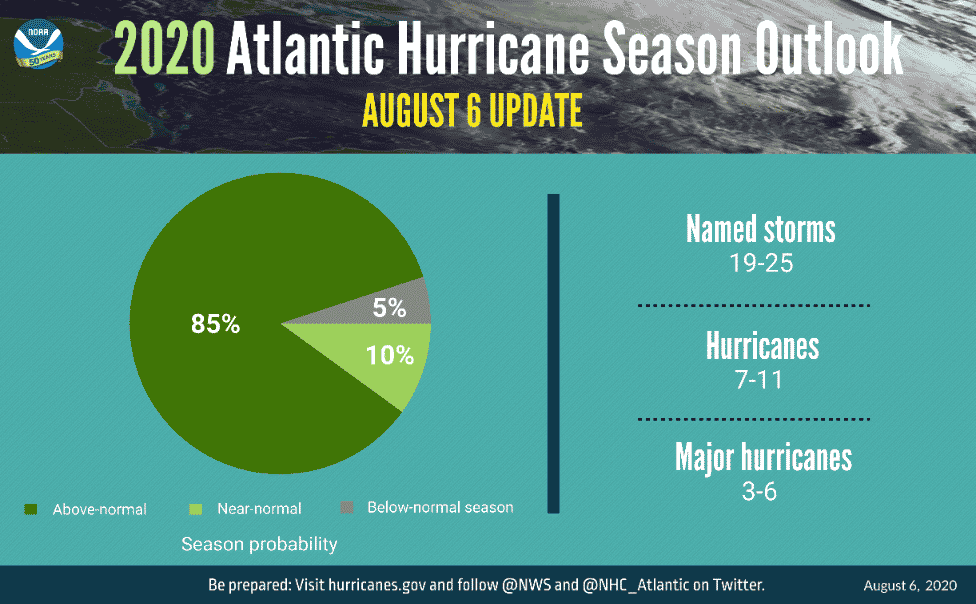 Both Gulf and East Coast states were affected by landfalling hurricanes, and, strikingly, very few coastal counties have not been affected by tropical storm winds this season. Many of the 2020 storms formed in the Caribbean or Gulf of Mexico, hence nine out of the 12 U.S. landfalling storms targeting the Gulf states. Louisiana, for example, suffered five landfalls starting in May with TS Bertha.

This is the 6th year in a row that named storms formed before the official start of the season, and the 5th season in a row with at least one category 5 hurricane. It was also the first year to have two major hurricanes in the month of November (Eta and Iota, a Category 4 and 5 respectively), and September 2020 alone had 10 storms – almost equal to the number of total storms for the entirety of an average season, which is currently 12.

The 2020 season also had 27 named storms that hold the record for earliest formation by initial letter – most of the previous records were set in 2005.

A Bit of Science

One characteristic of the 2020 season that will be discussed for quite a while is the rapid intensification of storms. Ten storms so far this year have seen sustained winds gain 35 mph or more in speed within 24 hours or less, with Eta and Iota beating all records with 80 mph increases as they neared landfall on the coast of Nicaragua. The 1995 season also had 10 rapidly intensifying storms – but not at the same rate. Some scientists argue that rapid intensification is likely to become a more common feature of future storms, making forecasting trickier. Research has shown that rapid intensification, observed over the past 40 years, has become more frequent, a pattern that is not supported by models of internal climate variation alone, suggesting that human-caused global warming might be a factor. Another study determined that the chance of a hurricane intensifying went from 1 in 100 in the early 80s to 1 in 20 by mid-2005. 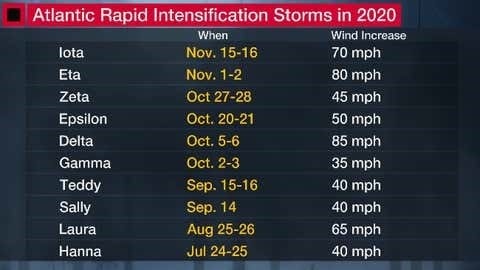 What we are seeing in the U.S. is also being seen across the globe. Rapidly intensifying typhoons have wreaked havoc in Asia this year, and we saw storms crossing the Caribbean and hitting Central American countries as major hurricanes formed in less than 24 hours. Nicaragua was hit by two category 4 hurricanes in two weeks, something never seen before.

I have previously written that hurricanes are becoming stronger, wetter, slower, and more destructive, and all these trends have been linked to anthropogenic global warming in one way or another. New studies since have also pointed to the fact that the link between heat and the intensity of tropical cyclones is becoming clearer, and that their intensity over the past four decades has increased.

Another new characteristic of Atlantic hurricanes determined in a study is that they are losing strength more slowly. Whereas in the 60’s hurricanes lost 75 percent of their strength within 24 hours of making landfall, today they lose only 50 percent in the same amount of time. That certainly contributes to a higher impact from rainfall and winds.

The very active forecast released in August by NOAA was based on some variables that historically affect Atlantic tropical cyclone activity. In addition to the abnormally warm sea surface temperatures, which act as a type of “fuel” to the formation of storms, there were other factors at play.

The establishment of a La Niña pattern, which historically affects high winds in the Atlantic, tends to diminish the vertical wind shear that could help prevent the formation of a tropical cyclone. Also, according to NOAA, a large-scale climate pattern called the Atlantic Multi-Decadal Oscillation has also been favoring more active hurricane seasons since 1995 by making wind conditions in the tropics more conducive to tropical cyclone formation. This favors weaker tropical Atlantic trade winds and an enhanced west African monsoon, which also affect Atlantic tropical cyclone formation.

Costs and Future of Hurricanes

Tropical cyclones are the costliest of weather and climate disasters, no doubt due to their widespread impacts: storm surge, wind, rain, all come together to create compound risks in the areas affected. In addition, hurricane recovery – ecological, structural, economic – tends to last for years, and health impacts add to the costs.

The trend in rapid intensification, especially as a storm approaches landfall, can make preparations and evacuations more difficult, if not impossible, and is bound to increase the danger to people and the costs of these disasters. Plus, we cannot forget that storms are more consistently forming before and after the official hurricane season, and that extension can signify a longer period of disaster recovery, as well as a longer period during which communities will have to stay in a state of preparedness.

Especially costly and worrisome from the point of view of preparedness and recovery is when storms hit the same area successively. Hurricane Laura hit the Louisiana Lake Charles area in August as a Category 4, one of the strongest storms to hit the state. Then Hurricane Delta hit the same general area only six weeks later, while many houses still had tarps covering their roofs, and people in the region, especially low-income segments of the population, were far from recovered.

Last but certainly not least, we are dealing with a pandemic that added to the challenges of evacuations, sheltering, and recovery. Because of the unprecedented confluence of hurricane season and the pandemic, many emergency preparedness officials learned on the fly how to best accommodate evacuees while trying to contain spread of the novel coronavirus.

The economic crisis from the pandemic is also leading to a lack of resources for both the people and the authorities to deal effectively with the disaster and take suitable action, something that could take years to resolve. The pandemic is of course a concern around the world, and everywhere people are scrambling to deal with these compound risks.

The Need for Action

There is an urgent need for policies and funding for equitable pre-disaster preparedness to help curtail post-disaster costs and recovery. Resources and technical assistance also must be allocated equitably so that those most in need and with the least capability of rebounding have the means to do so.

We know that human-induced global warming is making storms worse and bringing more destruction with them. We also know we have a path to reduce the carbon emissions that are driving our temperatures up. It is imperative that countries – including the U.S. – continue to increase the ambition of their pledges to reduce global warming emissions and cap warming to well below 2 degrees Celsius, as promised in the Paris Agreement. Only by keeping the worst of climate change at bay will we also limit the wrath of hurricanes, saving lives, property, and resources.

But for now, any way you look at it, the unprecedented 2020 season is one for the history books.