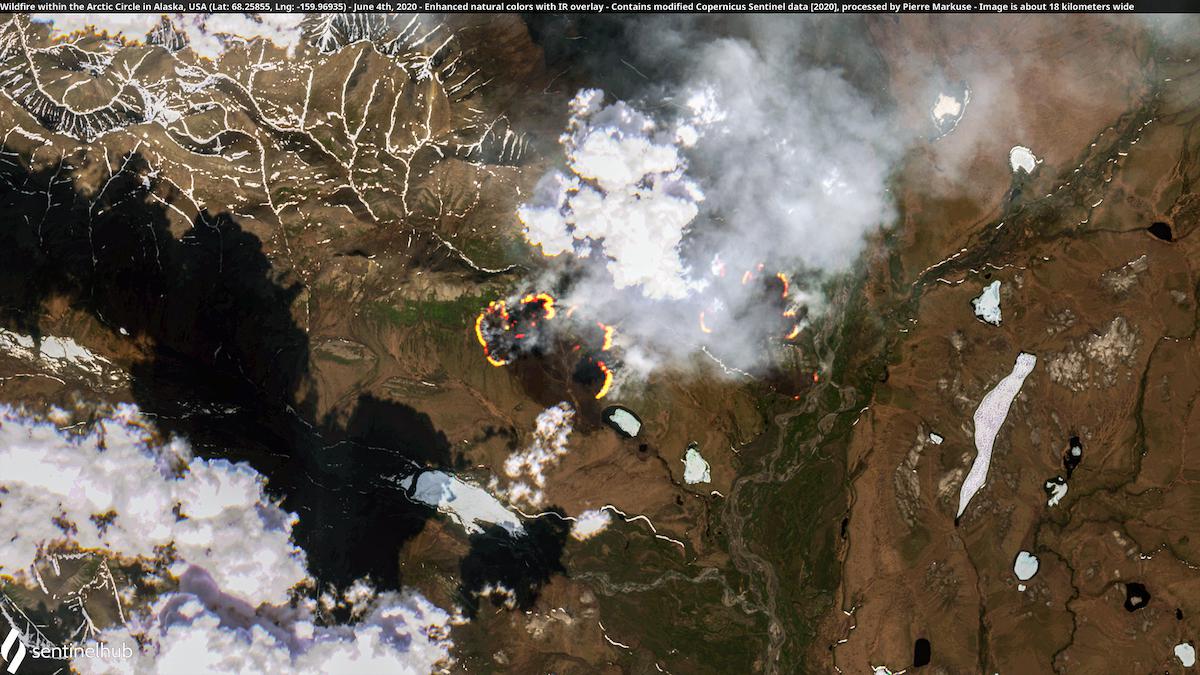 Wildfires within the Arctic Circle in Alaska on June 4, 2020. Contains modified Copernicus Sentinel data processed by Pierre Markuse. CC BY 2.0

NASA and the European Copernicus Climate Change Service rated 2020 as tied with 2016 as the warmest year on record (NASA rates the margin of error at .05 degrees C); the Japan Meteorological Agency rated 2020 as the warmest year on record. Minor differences in rankings often occur among various research groups, the result of different ways they handle data-sparse regions such as the Arctic.

As detailed in a January 12 post at this site by Bob Henson, 2020 for the U.S. was the fifth-warmest year in history going back to 1895. Ten states had their second-warmest year on record and four had their third-warmest year. None of the contiguous 48 states was below-average in temperature in 2020. Figure 1. Departure of temperature from average for 2020, the second-warmest year the globe has seen since record-keeping began in 1880, according to NOAA. Record-high annual temperatures over land and ocean surfaces were measured across parts of Europe, Asia, southern North America, South America, and across parts of the Atlantic, Indian, and Pacific oceans. No land or ocean areas were record cold for the year. NOAA National Centers for Environmental Information

The remarkable global warmth of 2020 means that the seven warmest years on record since 1880 were the most recent seven years — 2014 through 2020. The near-record global warmth in 2020 is all the more striking since it occurred during the minimum of the weakest solar cycle in more than 100 years and during a year without a strong El Niño. Record-warm global temperatures typically occur during strong El Niño events and when the solar cycle is near its maximum. The warmth of 2020 is a testament to how significantly human-caused global warming is heating the planet. 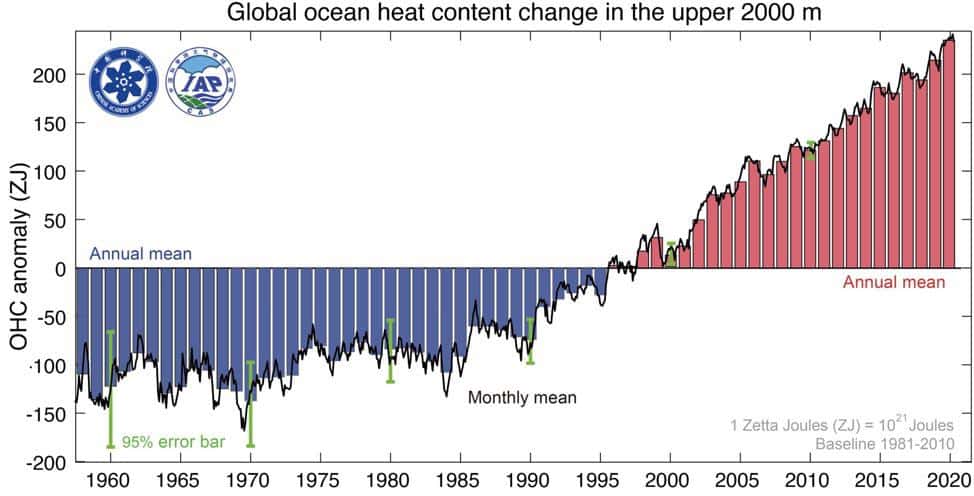 Despite the presence of a prominent La Niña event that began in August, the total heat content of the world’s oceans in 2020 was the warmest in recorded human history, according to a January 13, 2021 paper by Cheng et al., Upper Ocean Temperatures Hit Record High in 2020, published in Advances in Atmospheric Sciences. In the uppermost 2,000 meters of the oceans, there were 211 to 234 zettajoules more heat in 2020 than the 1981-2010 average, and 2020 had 1 to 20 zettajoules more ocean heat content than in 2019 (a zettajoule is one sextillion joules — ten to the 21st power). For comparison, in 2010, humans used a total of 0.5 zettajoules of energy.

More than 90% of the increasing heat from human-caused global warming accumulates in the ocean because of its large heat capacity. The remaining heating manifests as atmospheric warming, a drying and warming landmass, and melting land and sea ice. Increasing ocean heat content causes sea-level rise through thermal expansion of the water and melting of glaciers in contact with the ocean. It also produces stronger and more rapidly intensifying hurricanes; causes more intense precipitation events that can lead to destructive flooding; contributes to “marine heat waves” that damage or destroy coral reefs; and disrupts atmospheric circulation patterns.

International records researcher Maximiliano Herrera keeps the pulse of the planet in remarkable detail, and he logged 11 nations or territories that set or tied their all-time heat records in 2020. That total fell far short of the record of 24 such records in 2019. No nations or territories set or tied an all-time cold record in 2020. Here are the all-time heat records set in 2020:

One Monthly National/Territorial Cold Record Beaten or Tied in 2020

An October monthly record reported in Aruba was judged to be unreliable.

Hemispherical and Continental Temperature Records in 2020

December 2020 was the eighth-warmest December since global record-keeping began in 1880, NOAA’s National Centers for Environmental Information reported January 14. NASA and the European Copernicus Climate Change Service rated the month as the sixth-warmest December on record, and the Japan Meteorological Agency rated it as the tenth-warmest. Again: Minor differences in rankings often occur among various research groups, the result of different ways they handle data-sparse regions such as the Arctic. 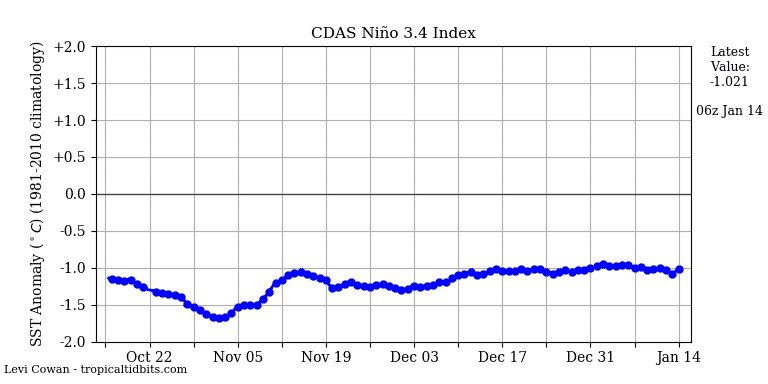 Figure 3. Departure of sea surface temperature from average in the benchmark Niño 3.4 region of the eastern tropical Pacific (5°N-5°S, 170°W-120°W). Sea surface temperature were approximately one degree Celsius below average over the past month, characteristic of moderate La Niña conditions. Tropical Tidbits

La Niña conditions remained in the moderate range during December and early January, prompting NOAA to continue its La Niña advisory in a January 14 monthly discussion of the state of the El Niño/Southern Oscillation, or ENSO.

Forecasters at NOAA and at Columbia University’s International Research Institute for Climate and Society expect La Niña conditions will continue through the winter (95% chance during January-February-March), and potentially transition to “neutral” during the spring (55% chance during April-May-June). About half of all La Niña events continue into a second year, but fewer than 20% of the ENSO models predicted that La Niña conditions would last into the summer of 2021.