How Do the 2020 Candidates Rate on Climate Action? 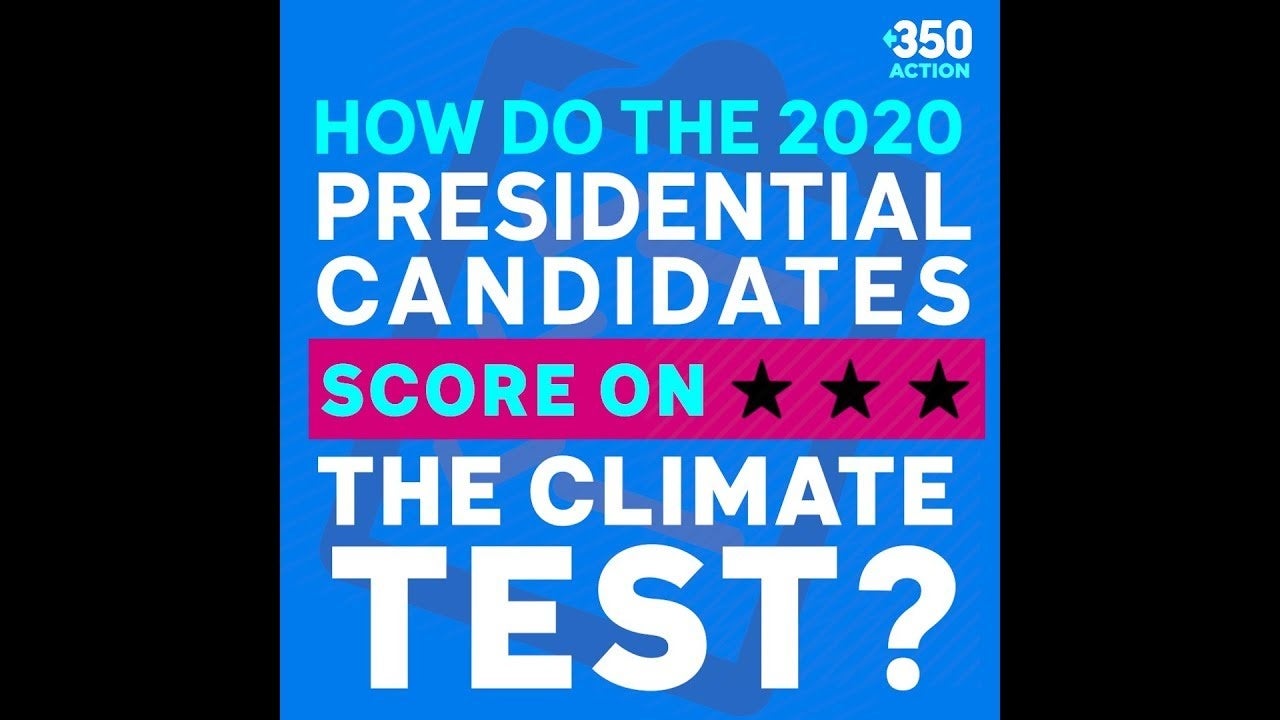 Climate change is shaping up to be a major issue going into the 2020 presidential primary. A February poll found that climate action was a top issue for Democratic voters in early voting states, rivaled only by universal health care. Many candidates have promised to make the issue a priority if elected, but how to they compare to each other on the details?

350 Action has stepped in to answer that question with its 2020 Climate Test. The test grades candidates on three points.

1. Do they support the Green New Deal?

2. Have they taken action to keep fossil fuels in the ground?

3. Have they taken the No Fossil Fuel Money pledge?

“We’re making it clear where 2020 candidates land on the policies and practices essential to any meaningful attempt at addressing the climate crisis,” 350 Action’s Executive Director May Boeve said in a statement reported by The Huffington Post. “Bold climate action that strengthens our economy and communities is not only what most Americans want ― it’s also the reasonable and responsible way forward.”

Three candidates do not meet any of the criteria. They are former Maryland Representative John Delaney, former Colorado Gov. John Hickenlooper, and, unsurprisingly, current President Donald Trump, who is so far the only Republican 2020 candidate.

The others have a more mixed record:

1. New Jersey Sen. Cory Booker — Booker has endorsed the Green New Deal and has a good record on fossil fuels, but has not taken the pledge to refuse fossil fuel money.

2. South Bend, Indiana Mayor Pete Buttigieg — Buttigieg has endorsed the Green New Deal and taken the No Fossil Fuel Money pledge, but there is not enough information on his stance on fossil fuel projects.

3. Former Housing and Urban Development Head Julián Castro — Castro supports the Green New Deal but has not taken the No Fossil Fuel Money pledge and his record on fossil fuels is not clear.

4. Hawaii Rep. Tulsi Gabbard — Gabbard has opposed new fossil fuel projects and pledged not to take fossil fuel money, but has said she is still considering the Green New Deal resolution, despite supporting the initial call for a committee on the idea.

5. California Sen. Kamala Harris — Harris has co-sponsored the Green New Deal, but she has not pledged to eschew fossil fuel money. She has voiced opposition to the Keystone XL pipeline but did not co-sponsor the Keep it in the Ground Act of 2017 or the 100 by 50 Act of 2017 that calls on the U.S. to achieve 100 percent renewable energy by 2050.

6. Washington Gov. Jay Inslee — Inslee has made fighting climate change the focus of his campaign. He supports the Green New Deal and has taken the No Fossil Fuel Money pledge, but his record on fossil fuel projects is more ambiguous, according to 350 Action’s research document. For example, he has been targeted by activists in Washington state over a liquefied natural gas terminal and refused to take a stance on the Dakota Access Pipeline, but has opposed the Trans Mountain Pipeline and denied permits for what would have been the largest terminal for train-carried oil in the U.S.

8. Former Texas Rep. Beto O’Rourke — O’Rourke has spoken in support of the Green New Deal, but has spoken in favor of natural gas as a bridge fuel and was taken off the No Fossil Fuel Money pledge for violating its terms.

The test doesn’t just inform voters, it also encourages them to take action and tweet or call the candidates to pressure them on climate issues. It is possible that test has already had an impact. Since it was released Wednesday, Buttigieg signed the No Fossil Fuel Money pledge. His tweet announcing his signature was time-stamped about two hours after 350 Action’s tweet promoting its test, and Buttigieg did not say if his decision was prompted by the release of the test.