Dutch photographer
Marsel van Oosten was awarded the prestigious title of Wildlife Photographer of the Year for his surreal portrait of a pair of golden snub-nosed monkeys.

“The Golden Couple” shows a male and female snub-nosed monkey sitting on a stone in the temperate forest of China’s Qinling Mountains. The endangered species, named in part for their golden-reddish fur and flattened noses, are endemic to the area.

The annual international wildlife photo competition is organized by the Natural History Museum in London and is now in its 54th year.

“In a world which is in thrall to special effects, this image celebrates the majestic and otherworldly presence of nature, and reminds us of our crucial role in protecting it,” Natural History Museum Director Sir Michael Dixon said in a press release emailed to EcoWatch.

Snub-nosed monkeys live in groups and are constantly on the move, so it took the artist several days to understand the group’s dynamics and to take the perfect shot. Oosten’s image, taken during springtime, shows the two primates intently watching an altercation between the lead males of two other groups.

“This image is in one sense traditional—a portrait. But what a striking one, and what magical animals,” chair of the judging panel, Roz Kidman Cox, added. “It is a symbolic reminder of the beauty of nature and how impoverished we are becoming as nature is diminished. It is an artwork worthy of hanging in any gallery in the world.”

Oosten is an award-winning nature and wildlife photographer based in the Netherlands. His submission won the Wildlife Photographer of the Year grand title and the animal portraits category.

The award for Young Wildlife Photographer of the Year 2018 went to 16-year-old South African wildlife photographer
Skye Meaker for his serene image of a leopard waking from sleep at the Mashatu Game Reserve in Botswana. 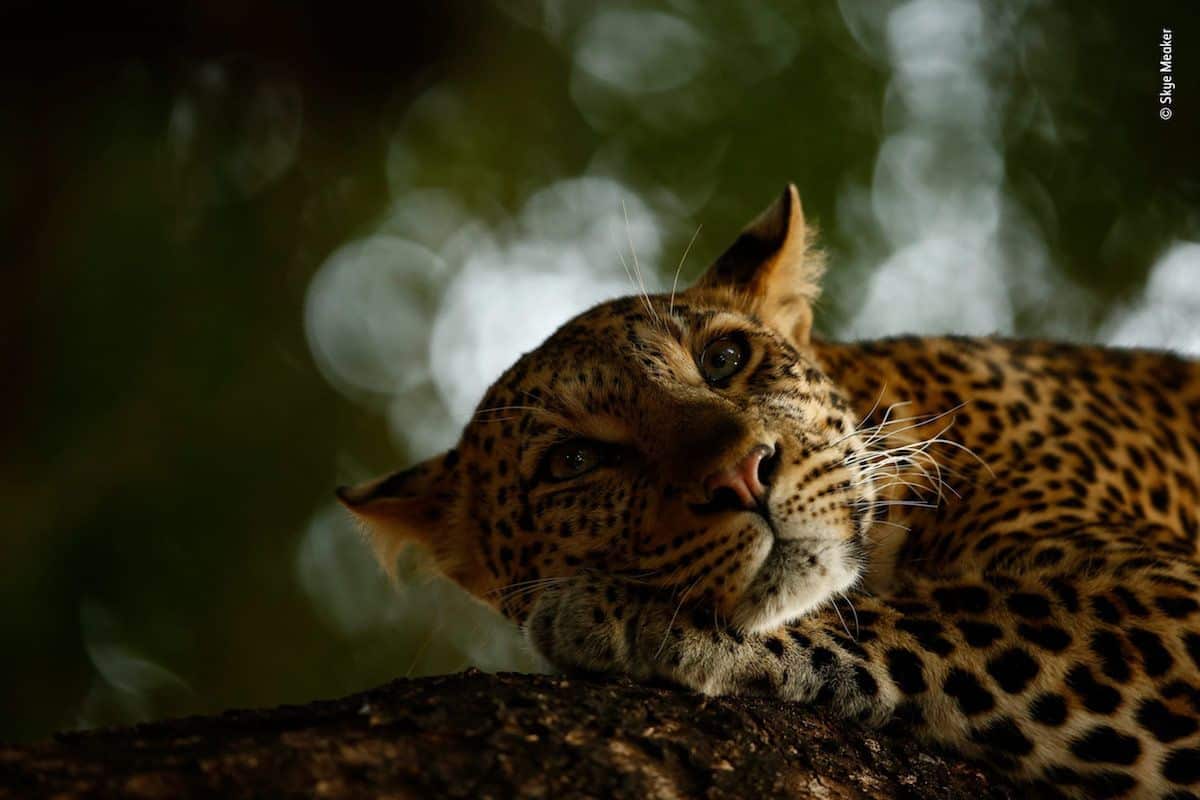 “She would sleep for a couple of minutes. Then look around briefly. Then fall back to sleep,” Meaker told the Natural History Museum about the photo.

The leopard is seen lying along a low branch of a nyala tree and was positioned just meters away from the young photographer when he snapped the picture.

“With precisely executed timing and composition, we get a coveted glimpse into the inner world of one of the most frequently photographed, yet rarely truly seen, animals,” competition judge and previous competition winner Alexander Badyaev said in the press release.

This year’s winners were chosen from more than 45,000 entries from professionals and amateurs across 95 countries. Oosten and Meaker’s images were selected out of 19 category winners.

An exhibition of the photographs will open at the Natural History Museum on Oct. 19 before it tours across the UK and internationally to locations including Canada, Spain, the U.S., Australia and Germany.

New to this year’s competition is the Lifetime Achievement Award. World renowned wildlife photographer Frans Lanting is being honored for his three decades of conservation work and his photographs will also be featured in the exhibition.

The 2019 Wildlife Photographer of the Year competition opens for entries on Monday and ends Dec. 13. It is open to photographers of all ages and abilities.

Scroll through the slideshow below to check out more of the winning images!