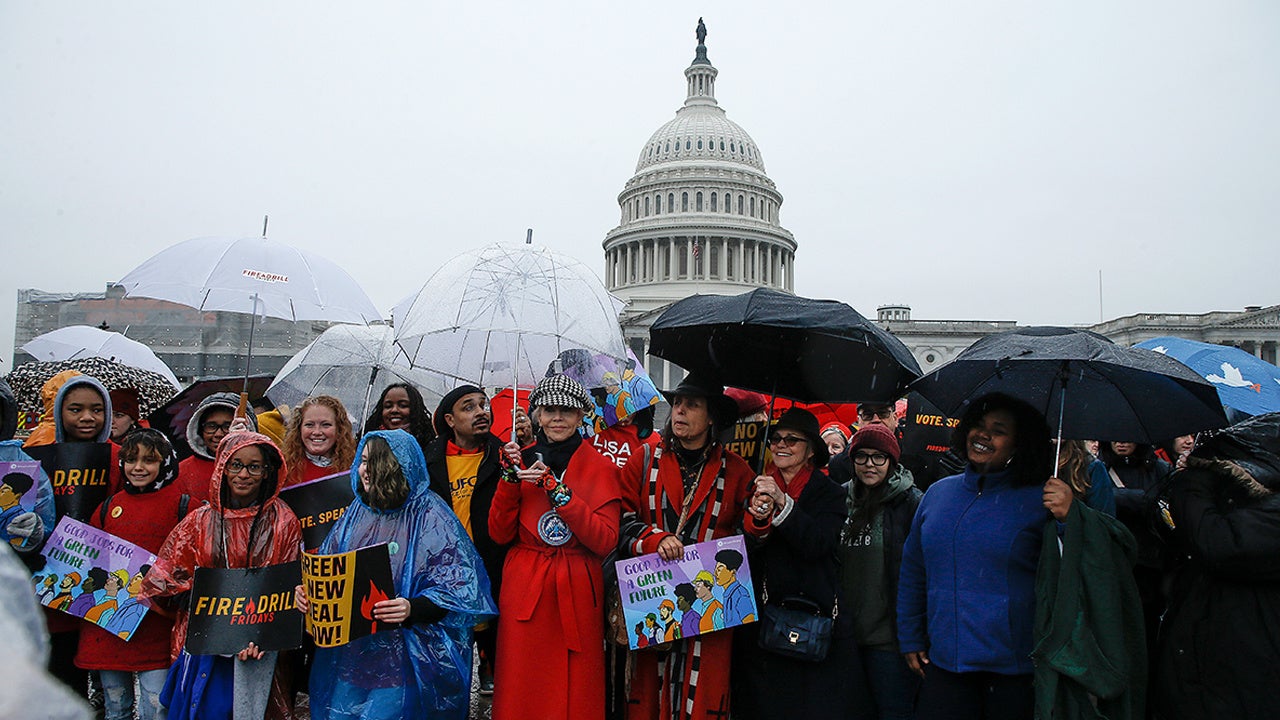 There’s no question that 2019 was a wakeup call on the climate crisis. Everything from devastating extreme weather events and seeing the planet’s hottest month in recorded history to increasingly dire scientific reports coming out seemingly each week removed any doubt that this global emergency is rapidly escalating. We could hardly blame someone for feeling discouraged.

Here’s what we must remember, though.

For all of the unfortunate events that happened this year, we also saw an equal (and growing) opposite reaction. People all around the world stepped up for the climate like never before.

What’s more, technological advancements and plain economics are making the solutions to the crisis more feasible than ever.

So, here’s the top reasons why 2019 left us with real climate hope!

NYCs massive #ClimateStrike march has begun, from Foley Sq down Centre St to Chambers St across to Broadway… and down to the Battery! Thank you @ClimateCrisis and everyone else marching! pic.twitter.com/WUpeRP0ZQS

Our biggest source of optimism this year? The incredible number of people around the world that stepped up for our climate. These highlights make us believe that one day we’ll look back at 2019 as a historic turning point for the movement.

1. With an estimated 4 million attendees in over 163 countries, the Sept. 20 climate strike — the biggest climate demonstration in history — saw more people calling for climate action at once than ever before.

2. The September strike was far from a one-off. In the spring, hundreds of thousands of young people took to the streets and since then, ongoing protests have shown world leaders that the climate movement isn’t going anywhere. Take this pre-COP 25 protest in Madrid, for example, where an estimated half a million protestors once again rallied for action. 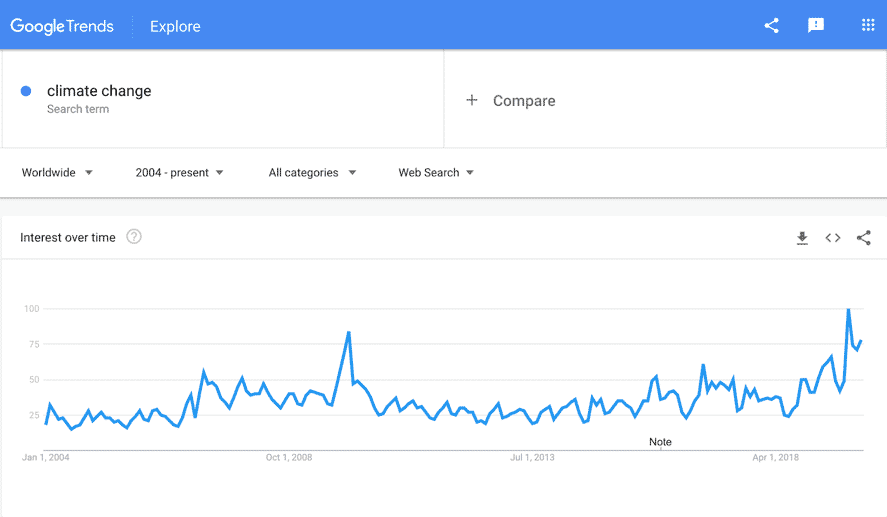 3. This year saw the most Google searches for the term “climate change” ever. If that doesn’t show peaking public concern on the issue, we don’t know what does. In fact, the term was Googled so much that it even beat out searches for the year’s most popular TV show: Game of Thrones. 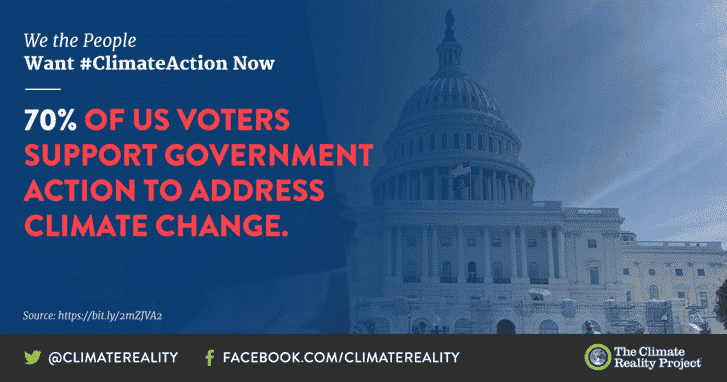 4. Fortunately, it’s not just awareness of the problem that reached new highs — it’s also people’s desire for action. Take public opinion in the U.S., for example. More than ever, Americans from all walks of life recognize that preserving a safe, sustainable climate simply can’t be a partisan issue.

5. One of the best side effects of this shift in public opinion? Growing divestment from fossil fuels by individuals, universities and companies. Take the University of California schools system. This past September, UC administrators removed all fossil fuel investments from their billion portfolio. With this move, the UC system joined more than a thousand institutions that have divested more than trillion from fossil fuels since 2012. That’s a seriously large chunk of change no longer supporting dirty energy.

It’s not just organizations, though — countries around the world are also pulling their funding. In November, the European Union announced its plan to remove all fossil fuel subsidies after 2021 in what it calls the “most ambitious climate investment strategy of any public financial institution anywhere.”

6. And speaking of dirty energy, 2019 left us with climate hope because of the increasing scrutiny the fossil fuel industry is finally getting for spending decades trying to stop climate action. We’re seeing everything from lawsuits and growing media coverage to the growing field of attribution science — which can pin natural disasters on the emissions of specific companies — hold this industry accountable for knowingly perpetuating the climate crisis

7. Another encouraging trend? In 2019, celebrities used their far-reaching platforms to support climate action like never before. Everyone from musicians like Lizzo, Billie Eilish, Shawn Mendez, Jaden Smith and The 1975 (which even made a song with climate activist Greta Thunberg) to movie stars like Joaquin Phoenix, Chris Hemsworth, Jane Fonda and Reese Witherspoon, and global figures like Malala Yousafzai and Prince Harry, to name just a few, all joined the fight.

Influential voices amplifying the urgency of the climate crisis helps raise awareness and as a result, spurs more of the grassroots action we really need.

8. Whether calling it a crisis, an emergency or a breakdown, this year news sources started covering climate change like never before.

Why now? Partly thanks to collective efforts by media groups to finally do this story justice. Take the Covering Climate Now global journalism initiative, for example. Co-founded by The Nation and Columbia Journalism Review, this project includes more than 350 outlets worldwide reaching a combined audience of over a billion people. Now that’s the kind of climate coverage the world needs.

9. This December, climate activist Greta Thunberg was named Time magazine’s person of the year — a distinction that highlights the importance of climate leadership today. What’s more, earlier this year Greta was nominated for the Nobel Peace Prize — perhaps the most widely recognized humanitarian award in the world. This gives us optimism not just because we’re happy to see Greta receive the recognition she deserves, but because the nomination brought the world’s attention to the urgent need for climate action.

10. In the U.S., the first-ever presidential climate town hall gave us a lot of hope. Why? Because it was the first time ever that presidential candidates had to address the climate crisis so seriously. Just four years ago during the 2016 election, candidates were hardly even asked about the topic.

Renewable energy — our most critical tool for reducing greenhouse gas emissions — just keeps getting cheaper and more accessible. So much so that as of this year, according to Bloomberg NEF, “for two-thirds of the global population, it is already cheaper to get power by building a new wind or solar farm than a fossil-fuel power plant.” How’s that for some good news?

11. Globally, solar photovoltaic installations are expected to reach a new yearly high of 114.5 GW by the end of 2019 — a 17.5 percent increase compared to 2018. What’s more, estimates predict that by 2024 the price of solar should drop by another 15 to 35 percent, spurring growth even further!

12. Wind energy also saw record-breaking growth this year. Specifically, by having a little under 2 GW installed from July 1 – Sept. 30, this was the highest third quarter on record for wind installations in the U.S. This push brought the country’s total wind supply to more than 100 GW of power — enough to power “the equivalent of 32 million American homes.” What’s more, 2019 estimates predict that global wind power capacity is expected to grow by 60 percent over the next five years.

13. Battery power, which is crucial for economically feasible electric vehicles (and renewable energies like solar and wind), made some serious strides this year. Largely thanks to increased production, battery prices for EVs went from costing over ,100 per kilowatt-hour in 2010 to 6 per kilowatt-hour in 2019. By 2023, average prices are estimated to drop to close to 0/kWh — making EV’s of all kinds even more affordable.

With that cost decrease in mind, it’s hardly surprising that 2019 is expected to see a record 2.6 million EVs sold globally — about a 40 percent growth rate compared to 2018.

This year also saw automakers commit a whopping 5 billion to car electrification over the next five years.

14. The building energy retrofit market — a rapidly growing sector that shows great promise for emissions reductions — is another big reason for climate hope. In 2018, New York City was spending just 5 million on building improvements to save energy. However, a groundbreaking new law passed this year is expected to grow that market to nearly billion over the next decade — a 13-fold increase over today’s spending.

Experts estimate this measure will cut the city’s emissions by 26%, roughly the equivalent of San Francisco’s, and will create 141,000 new jobs in the New York City metro area by 2030!

15. This year the U.S. green economy employed more than 9.5 million people, who together generated a whopping .3 trillion in annual sales revenue —nearly 7 percent of annual US GDP. The importance of green jobs and green growth in the U.S. has never been clearer!

Local Wins Are Adding Up

A number of the world’s countries with the highest emissions showed a lack of climate ambition this year. Now, that’s certainly cause for concern and frustration, but fortunately this doesn’t tell the full story.

16. According to the UN, as of this December “around 7,000 cities from 133 countries, 245 regions from 42 countries, and 6,000 companies with at least US trillion in revenue have pledged to cut emissions themselves.” National leadership might be faltering, but local leaders are taking up this fight like never before.

17. Natural solutions to the climate crisis saw an inspiring amount of global effort this year. Take reforestation in Ethiopia: This year, the country planted 350 million trees in what the government said was the largest one-day tree-planting effort in history. Ultimately, local wins like these are adding up to make a difference for the whole planet.

18. This year, a total of 4,527 new Climate Reality Leaders were trained in Atlanta, Brisbane, Minneapolis and Tokyo. That’s 4,527 activists who now have Climate Reality training and tools to mobilize their communities for action in a decisive year.

19. Our new take on the annual 24 Hours of Reality program also saw great success this year. More than 1,500 Climate Reality Leaders gave more than 2,000 presentations on the climate crisis and how we solve it to audiences across 82 countries, on all seven continents, and in all 50 U.S. states.

20. Just this December, Climate Reality organizers mobilized the Los Angeles Unified School District (LAUSD) Board to sign a resolution committing the school district to transition to 100 percent clean, renewable electricity by 2030, and all other energy uses, including boilers, HVAC and transportation, by 2040.