2017 Clean Energy By the Numbers: A State-by-State Look 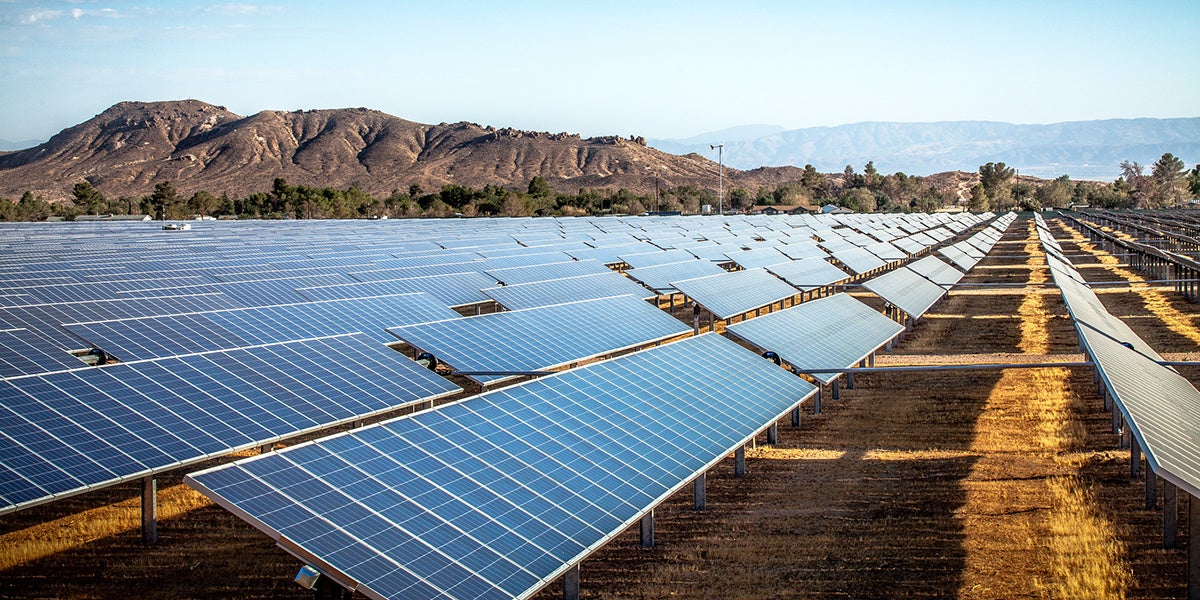 As part of its Electric Power Monthly series, the U.S. Energy Information Administration (EIA) released its year-end 2017 energy figures this week, detailing electricity production, use and costs at a state-level. 2017 was another big year for wind and solar, with many leading states continuing to add to their clean energy portfolios and a few states getting into the game for the first time.

You can click on a state in the interactive map below to see where they rank on wind and solar energy, as well as preliminary carbon emissions for each state (from the U.S. EPA). Click on the legend (far left arrow on the screen) to turn on and off information about wind, solar and carbon pollution. 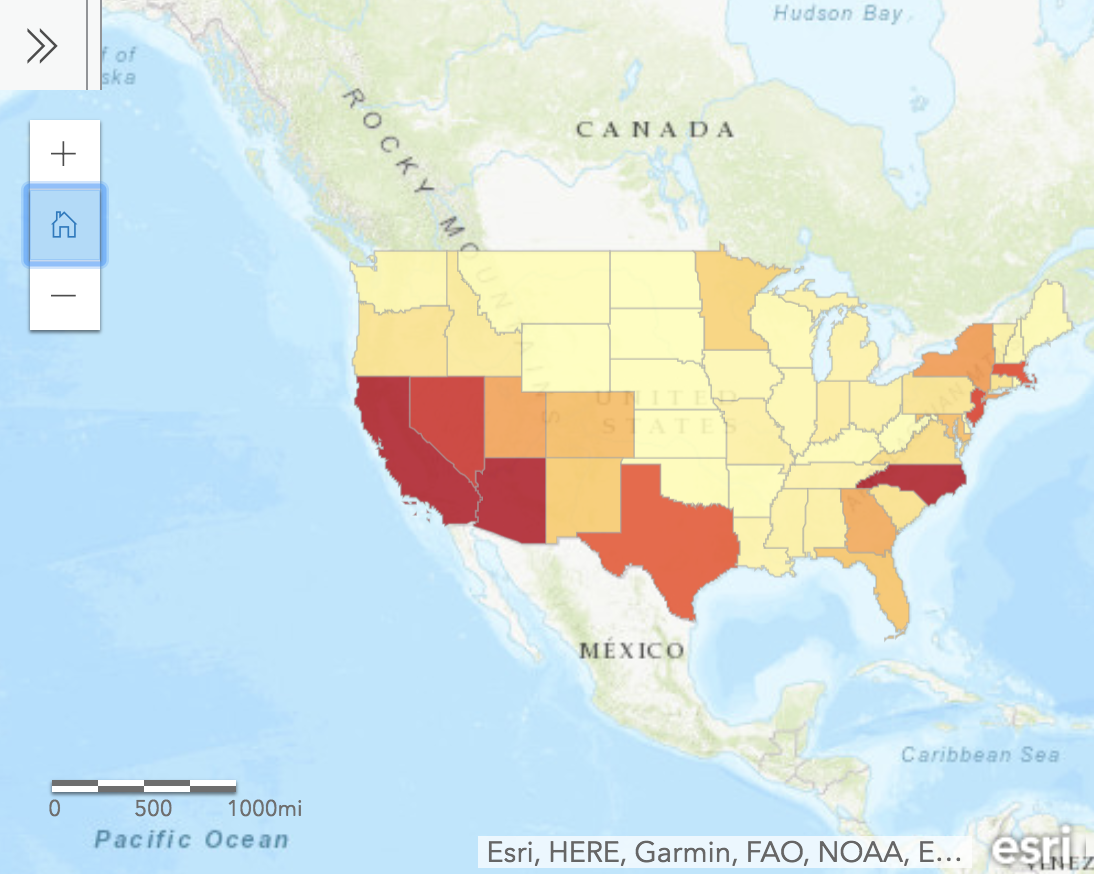 Over the last few years, the U.S. has seen remarkable growth in clean, renewable energy like wind and solar power. In 2017, renewables—such as hydropower, wind, solar and geothermal energy—made up 16 percent of the electricity powering the nation’s homes and businesses. This is almost double their contribution at the start of the decade.

While this is positive progress, much more still needs to be done: a recent NRDC report concluded that the U.S. should generate at least 80 percent of its electricity from renewable resources by 2050 in order to meet the Paris accord’s target of holding global warming to no more than a 2-degree increase. Without stronger policies in place, the most recent government forecast has America achieving only half that, or 40 percent from renewables, by 2050. However, there’s reason to think that the forecast is overly conservative, as wind and solar continue to grow across the country and states, cities and corporations continue to ramp up their climate and clean energy commitments. 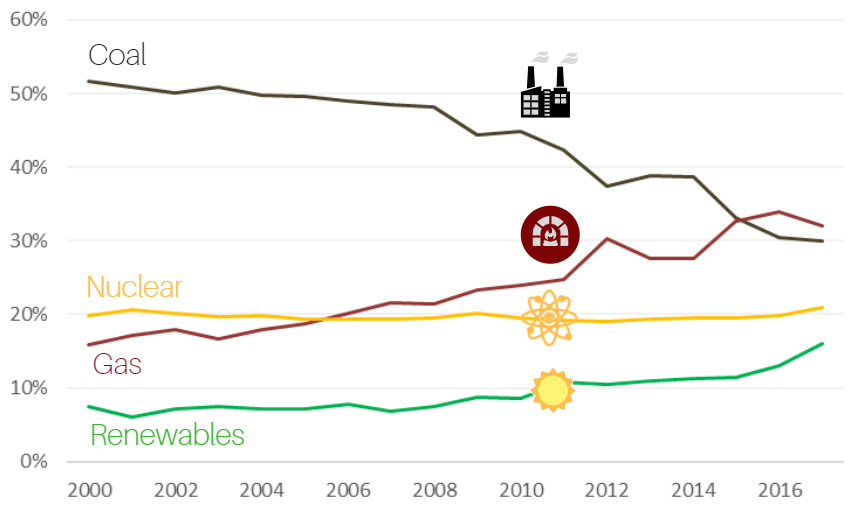 The State of Wind: The Great Plains Leads

At the end of 2016, wind became the largest source of renewable power capacity in the nation, overtaking hydropower. In 2017, the U.S. added another 6,250 megawatts (MW) of capacity, which is enough to power 2 million homes.

While one may not think of Iowa, Kansas, or Oklahoma as leaders on clean energy, these states actually have some of the cleanest power in the nation. The Midwest has some of the best wind resources in the country, and utilities, policymakers, and U.S. businesses are taking advantage of this low-cost energy resource. Iowa’s largest electric utility, MidAmerican, expects to be generating 85 percent of its electricity from wind by 2019. In Kansas, the utilities are on track to supply 50 percent of the state’s power with wind by the beginning of 2019.

Below are the top five states, as of the end of 2017, both in terms of total wind power and greatest proportion of power from wind. Texas, alone, hosts more than a quarter of all wind capacity in the country, and the state expects to add even more wind farms in the next four years before the expiration of the renewable tax credits. (In fact, Texas now has more wind power capacity than coal-fired capacity in the state).

While wind is still non-existent in certain parts of the country, it is making footholds in a number of states, including New Mexico and Missouri. In 2017, these five states saw the greatest growth in wind energy generation: And while wind power has historically been strongest in the Great Plains and Midwest regions, improvements in wind power technology—such as taller turbines—have allowed for more economic wind development in other parts of the country. Currently, nine states have no wind installed at all, including almost all of the southeast. Some of these states, like Virginia, South Carolina and Georgia, have large offshore wind potential. The U.S. currently only has one offshore wind farm operating, but as costs fall for these offshore wind projects across the world, there is a growing interest by many states to support new offshore wind projects. 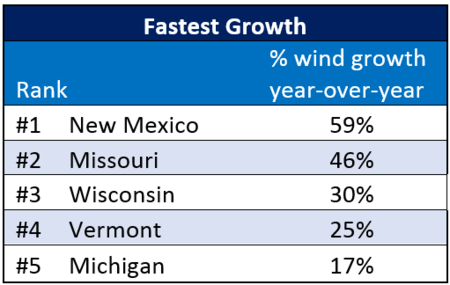 The State of Solar

The solar industry faced some significant setbacks in the last year. The threat of a solar import tariff loomed over the industry for most of the year (and Trump did impose tariffs on solar cell imports in January of 2018). Given this market uncertainty, the U.S. saw less solar growth than it did during a record-breaking 2016 and the solar industry reported its first year-over-year job loss, shedding around 9,800 jobs last year after multiple years of double-digit growth.

However, solar energy still enjoyed lots of bright spots in 2017. The Department of Energy officially hit its “Sunshot” Goal of $1-a-watt solar—about three years early. Minnesota, which has seen a massive increase in “community” solar projects, saw almost a 50 percent increase in solar jobs in 2017. Utilities in the west have reported record-low costs for solar generation projects, including solar + storage and smaller-scale projects. And businesses across the U.S. are still making new investments in solar energy to power their operations.

However, states that may currently find themselves at the bottom of the list can quickly turn things around. In 2016, Mississippi was in the bottom five—but the state has seen remarkable growth in 2017. Mississippi added more than 160 MW of solar—or enough to power 25,000 homes every year. That is also a 25-fold increase in the state’s solar capacity, in just one year. While solar is cheapest in the sunniest places, like the Southwest or Southeast, we see solar growing across the country. Every state has at least one megawatt of solar operating as of today, though many could be adding much more. 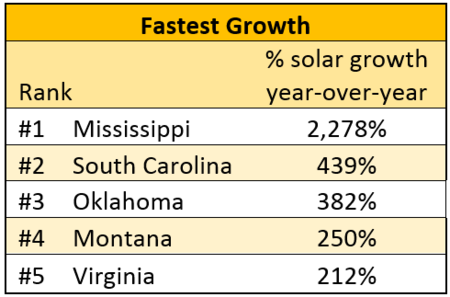 Increasing renewable energy development, a switch to lower-carbon fuels, and energy efficiency have helped the power sector slash its carbon pollution—the main contributor to climate change—over the last few years. And 2017 follows this trend. In 2016, emissions from the power sector fell to 25 percent compared with 2005 (the highest emissions year for the U.S.). In 2017, emissions have fallen by another 4 percent, down to 28 percent below 2005 levels.

Clean energy is thriving in the U.S., but there is much more we can be doing. Leading states, cities, and businesses have proven that clean energy is a smart investment for the economy, our pocketbooks and our climate. In the next few years, it will be up to them to continue to pursue the many clean energy opportunities and investments available. Hopefully next year’s EIA numbers will reflect such progress.