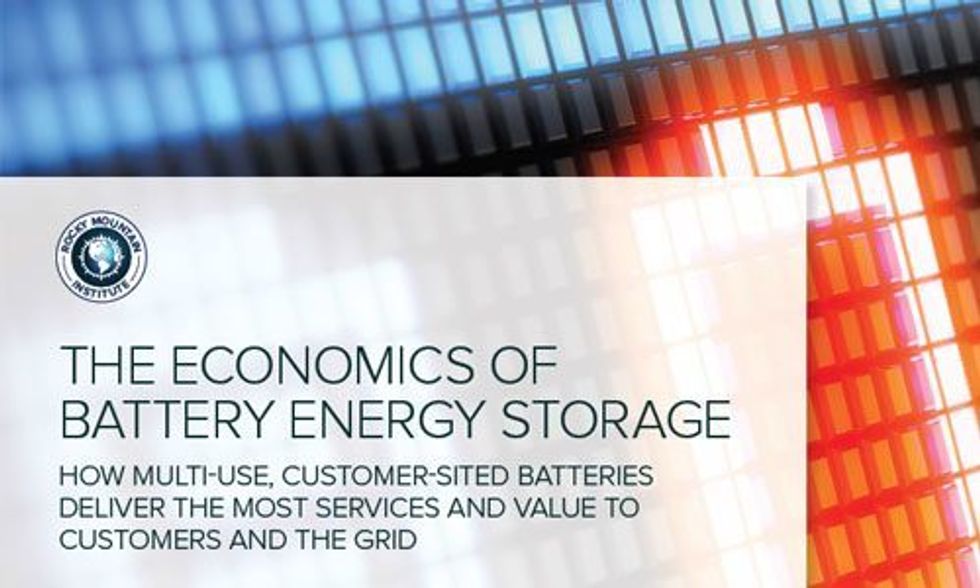 In many ways, 2015 has been “the year of the battery.” Consider the excitement around Tesla’s Powerwall or battery energy storage’s 600 percent Q2 growth over Q1 or one of the world’s largest utilities recently proclaiming that batteries will obviate the need for any new gas peaker plants in the U.S. post-2020. But the most important and exciting news around batteries still lies ahead.

To date, the attention has been on cost—how cheap batteries have gotten and how fast they've done so. Now, a new RMI report shifts the focus critically to the other part of the battery equation: value. The report found that batteries can reduce grid costs and customer bills, increase the resilience of the grid and support a largely renewable electricity system. All that value is available, if we make some critical adjustments.

Batteries are usually deployed today for single, primary uses: think demand charge reduction in California or frequency regulation on PJM’s wholesale electricity market. These single use cases are usually compared against the relative cost of a battery. This sells batteries short: comparing one use case against the cost of a battery is like comparing the cost of a Swiss Army knife to the value you can get from just using the blade. A battery is capable of delivering many services with the same device, just like a Swiss Army knife. But right now folks are buying the knife and only using the blade when they could also be using the pliers, screwdriver and so on.

So far, batteries deployed to reduce demand charges or defer traditional utility investments aren’t typically used to deliver multiple services. This means batteries might only be used for 1 - 50 percent of their useful life. And yet, a battery could be used to deliver other services for the other 50 - 99 percent of its useful life and get paid to do so. Would you build a hotel and only sell 1 - 50 percent of the rooms? Neither would we. So why do it with batteries?

In our new report, "The Economics of Battery Energy Storage," we asked some important fundamental questions:

Thirteen Services for Customers, Utilities and the Grid

Our research indicates that batteries, when placed behind the meters of residential, commercial or industrial customers, can deliver 13 services to the electricity system at large. The figure summarizes these services and the stakeholder group that accumulates the lion’s share of each benefit (more detail on these services can be found in our full report).

Batteries deployed further downstream in the electricity system (behind the meter) can technically deliver the maximum number of services to the grid. But as you move upstream in the electricity system—towards large centralized power plants—energy storage loses the ability to deliver some of these services. For example, a battery connected at the distribution level can’t perform customer bill management, while a battery connected at the transmission level won’t be able to defer any distribution-level investments.

Batteries Deployed Behind the Meter Can Be Cost Effective Today

This finding, though important, doesn’t tell us how much net value batteries can deliver to the electricity system. To estimate this, we developed an energy storage dispatch model to understand the economics of energy storage in four potential real-world scenarios.

Our results were surprising. Batteries deployed behind the meter are “in the money” right now, under prevailing cost structures, without subsidy. This finding comes with two major caveats:

Let’s use a case from the report to highlight our findings and the two caveats above. The figure shows how a battery deployed behind the meter for a hotel in San Francisco is used and what value it generates. As you can see, when the battery is deployed for a single use (demand-charge reduction) it doesn’t pay off (the orange portion of the revenue stack is smaller than the black cost stack in the bar chart) but when additional services layer on top of demand charge reduction, the economics flip in favor of energy storage. The pie chart also illustrates how little of this battery’s lifetime capacity is needed for demand charge reduction: about 53 percent. That means it can be dispatched for the remaining 47 percent of its lifetime time to deliver other services (in this case, resource adequacy for the utility and a suite of wholesale electricity services).

The Economics Are Promising, But Regulations Must Evolve

Every one of the revenue-generating services in this example is being delivered by some behind-the-meter energy storage systems in operation today. But very few projects are simultaneously providing this full stack of services (or other combinations thereof) with a single device or fleet of devices.

This is because energy storage—and other distributed energy resources (DERs) like smart controls, energy efficiency and rooftop solar PV—has matured faster than the rates, regulations and utility business models needed to support them as core components of the future grid. To overcome these barriers and realize the full value of rapidly evolving battery technologies, we recommend the following changes:

For Battery and DER Developers

Battery-based energy storage is a powerful resource capable of reducing grid costs and customer bills, increasing the resilience of the grid and supporting a largely renewable electricity system. And even though the economics of storage look good today, they’re only going to get better as gigafactories other than Tesla’s come online across the globe and costs come down further. It’s time for utility business models to evolve and for regulations to change in order for the benefits offered by behind-the-meter, battery-based storage to be captured across the U.S.