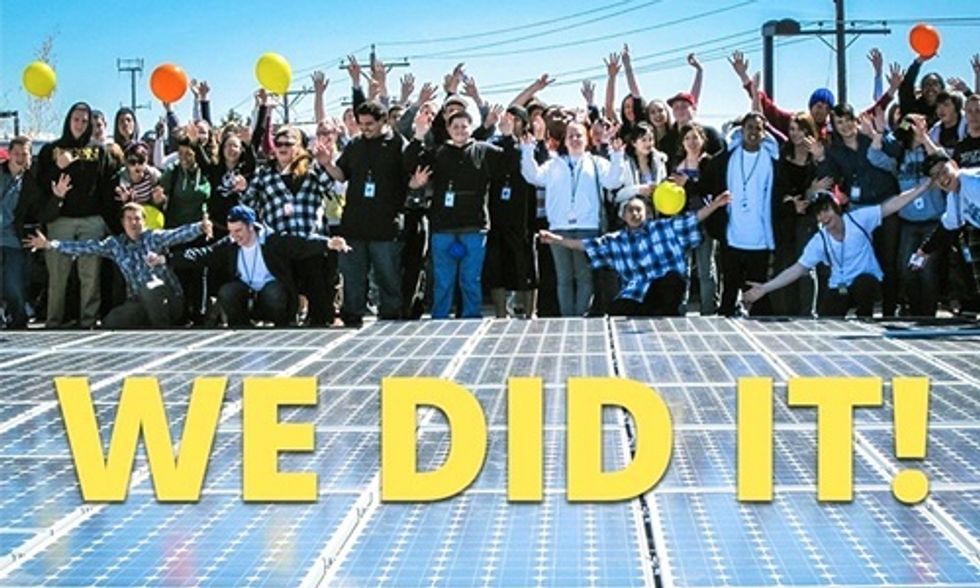 This year will go down as a banner year for solar energy. We expect new solar installations to reach a record-breaking 7.4 gigawatts (GW) by year's end. And yet, the 2015 record is already looking like a distant memory compared to what is to come.

America's solar boom is far from busting. In fact, solar will more than triple in size from just more than 24 GW of total capacity to nearly 100 GW by 2020. By that point, there will be enough solar installed to power 20 million American homes.

The more rapid growth is projected because solar companies have received and will continue to receive reliable and supportive federal policies. These allow them to mature, employ hundreds of thousands of American workers and pump billions of dollars in new investments into the American economy along the way.

Sustained growth for one of America's newest and most cutting-edge industries was solidified last week when Congress passed a bipartisan spending bill. This seemingly routine legislation is historic because it brings the solar industry to the forefront of the conversation about American energy.

Instead of the solar investment tax credit (ITC) dropping down to 10 percent for commercial users and zero for residential users at the end of 2016, Congress took action that will help solar drive America toward its clean energy future.

ITC Extension and Phase Down Schedule

For the first time, the legislation also allows for users to claim the credit when construction of their projects begins as long as the projects are placed in service by Dec. 31, 2023.

Thank you to everyone who answered our calls for action and helped #SaveTheITC. The future looks bright! https://t.co/xrcxB8kjGN
— Solar Industry (@Solar Industry)1450735560.0

The Industry Took Action With ITC

This powerful victory would not have been possible without the industry calling on Congress to stand with solar and the American people.

At SEIA's urging, Americans sent nearly 35,000 letters and made countless phone calls to their representatives in Congress, and industry leaders published nearly 100 columns and letters in community newspapers throughout the country.

The solar industry now has a seat at the table with the nation's major electricity producers and it will continue to power more and more of America for years to come.