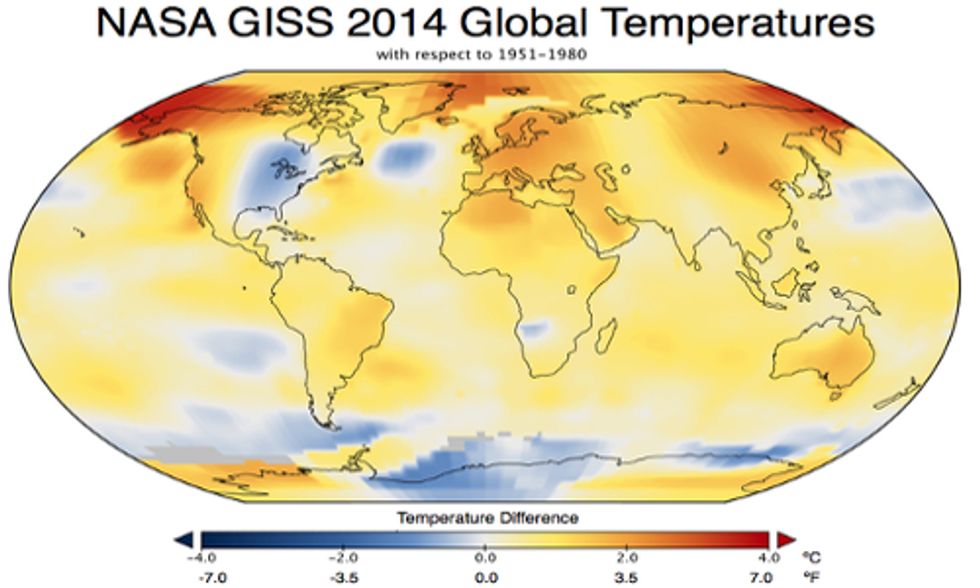 Climate scientists from NASA and the National Oceanic and Atmospheric Administration (NOAA) announced the 2014 global temperatures today, and the news they delivered is a blow to climate deniers who argue that climate change-driven global warming isn't happening.

The scientists revealed that 2014 was the hottest year in 134 years of record keeping, with seven of 12 months equalling or tying previous global records for that month. In addition, seven consecutive months set new records for surface ocean heat and December 2014 was the 358th consecutive month in which the combined global land and ocean surface temperatures was above average.

In the U.S. the past year was the 18th consecutive year in which the annual average temperature was above normal. And 13 of the 15 hottest years on record have occurred in the 21st century; the other two took place in 1997 and 1998, strong El Niño years. February 1985 was the last month where global temperature fell below the 20th century monthly average.

"When we have major El Niños, there is a redistribution of heat from ocean to the atmosphere, so when you have an El Niño event you have very warm conditions," said Thomas R. Karl, direcotr of NOAA's National Climatic Data Center. "This year we did not have significant El Niño."

On a more local level, Alaska, Arizona, California and Nevada all had their hottest year since records were kept. Denmark and Sweden has their warmest years on record, and Finland had its second warmest. Parts of Australia and Eastern Siberia also saw their warmest years.

"People are always asking, why do we think this is going on," said Gavin Schmidt, director of NASA's Goddard Institute for Space Studies. He said that they looked at multiple variables including volcanos, weather patterns such as El Niño land-use change and greenhouse gas emissions. Of the latter he said they found a correlation between increases in emissions and higher temperatures.

"While the ranking of individual years can be affected by chaotic weather patterns, the long-term trends are attributable to drivers of climate change that right now are dominated by human emissions of greenhouse gases,” he said. "The trends are continuing so we anticipate further records."

In response to a question about whether the findings had caused the scientists to make any personal lifestyle changes, Schmidt said, "There are things that people can individually do—having better appliances, driving less, walking more, biking. I try. It’s a little bit tricky. The best effort we can make individually is to discuss the facts of these findings to try to help decision-makers understand that this is an issue that won’t go away, and I think we spend a lot of time doing that."

NASA and NOAA are two keepers of the world's temperature data and independently produce a record of Earth's surface temperatures, and changes based on historical observations over oceans and land. The Japan Meteorological Agency previously announced their warmest year on record; the UK Meteorological Association is expected to release numbers soon.