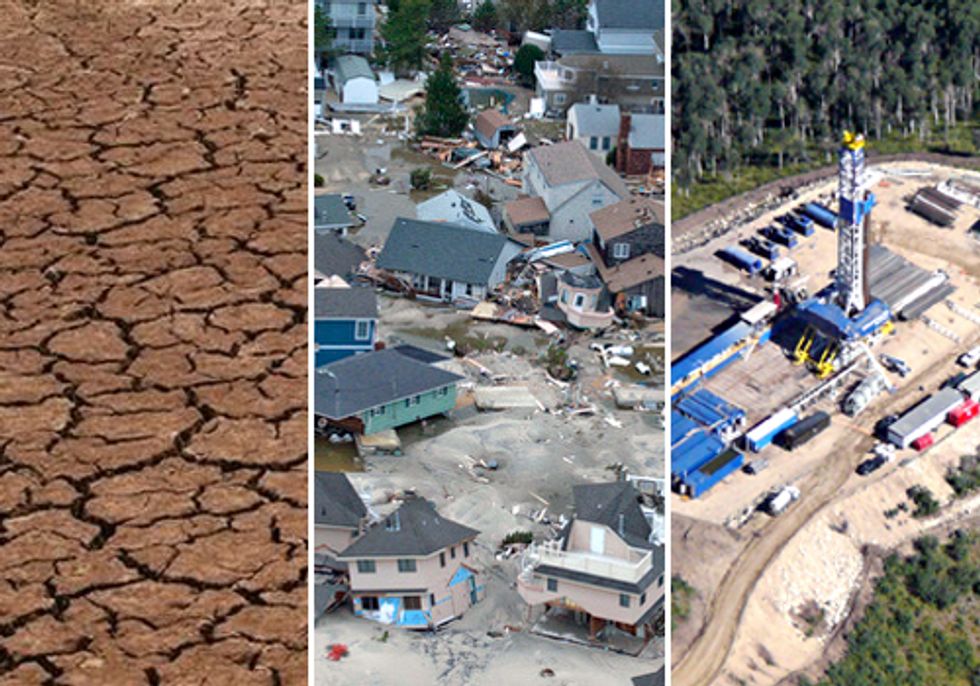 On the interwebs the year-end “Top Ten” lists and “Best Of” rundowns have become as ritualized a part of the winter solstice season as holiday shopping and putting lights on the house. I’ve been known to suffer from good case of FOMO (ICYMI, that’s “fear-of-missing-out”), so I thought I should compile a list of my own this year. Here’s my take on the environment-related stories from 2012 that are likely to have a lasting impact beyond this calendar year.

There’s nothing like flooding in Lower Manhattan to focus Americans’ attention on climate change. Years from now, I’m pretty sure (or at least I hope) that people will look back on Hurricane Sandy as one of those extreme weather events that helped shift the public’s view on global warming. Poll after poll after poll reveals that a growing number of people are coming to accept the reality of human-induced climate change. Extreme weather events like Sandy—far more than warnings from scientists—are the main driver of that shift. The hurricane might even have played a role in the presidential election, winning President Obama points for his deft handling of the disaster and a last-minute endorsement from New York Michael Bloomberg. Just as important, the storm seems to have shifted the way the mainstream media covers extreme weather events. Reporters and editors are starting to be less reluctant about linking wild weather to climate change. Case in point, Businessweek’s stunning cover: “It’s Global Warming, Stupid.”

This year’s brutal drought in North America is a close runner up for an extreme weather event that will have long-term impacts. By September, nearly two-thirds of the continental U.S. was suffering from moderate or extreme drought and, like Hurricane Sandy (and the persistently hot weather and the rash of tornadoes), the crisping of the U.S. farm belt helped convince people that something just ain’t right with the weather. But the drought is likely to be more important for the downstream effect it will have going into 2013. It forced huge numbers of ranchers to sell off their animals because they didn’t have (or couldn’t afford) feed for them. This led to a glut of meat in late 2012—which will turn into a relative shortage of meat in 2013 that will send retail meat prices upward. Those Americans who think that cheap hamburgers are akin to a God-given right might be in for a shock. If they connect higher food prices to weird weather, it could be another global warming game changer.

The End of Peak Oil

In November the International Energy Agency (IEA) released a report forecasting a continued increase in global oil and gas production. The takeaway: We’re not going to hit Peak Oil anytime soon. Extreme energy sources like tar sands, shale oil, and oceanic deepwater deposits will keep us stuck on the fossil fuel teat for years to come. This means, among other things, that we can’t wait for geology to kick us off of oil. As Bill McKibben explained it in his Rolling Stone viral hit, Global Warming’s Terrifying New Math, there’s more than enough accessible oil out there to fry the planet. “The report confirms that, given the current policies, we will blow past every safe target for emissions,” Michael Levi, a fellow at the Council on Foreign Relations, said when the IEA’s analysis came out. The accessibility of extreme energy sources presents a major challenge to humanity. We’ll have to exercise real self-discipline and commit ourselves, as a civilization, to move away from fossil fuels and adopt clean energy sources. Mother Nature won’t force the issue for us.

In the U.S., at least, the top headline from that IEA report focused on the projection that by the end of this decade the U.S. will surpass Saudi Arabia as the world’s top petroleum producer. This is due to the technical advances in hydraulic fracturing (fracking) and horizontal drilling that have opened up once inaccessible oil deposits. The fracking boom is also behind the huge increase in natural gas production. There’s so much gas coming out of the ground that energy companies and U.S. officials are starting to plan for the U.S. to become a gas exporter. Just listen to the excitement about gas expressed by President Obama in his 2012 State of the Union speech: “The development of natural gas will create jobs and power trucks and factories that are cleaner and cheaper, proving that we don't have to choose between our environment and our economy.” But many Americans aren’t convinced that more domestic oil and gas extraction is compatible with protecting the environment and public health. They have legitimate worries about how much water fracking uses, the risks it poses to water supplies, its threat to air quality and the overall impact on rural communities. A battle royalé is brewing over America’s energy production. You can bet that controversies over oil and gas fracking will drive headlines in 2013.

Funny thing is, even as the U.S. is producing more oil, we’re using less of it. Energy analysts say American oil consumption will keep declining, largely due to the increased efficiency of our vehicles. In August the Obama administration finalized rules that will nearly double the average fuel economy of cars and light trucks during the next 12 years. By 2025, new vehicles will get an average of about 54 miles per gallon. The better gas mileage will save drivers thousands of dollars over the lifetime of their vehicle, slash the amount of oil we have to import and lower greenhouse gas emissions associated with our vehicles. Those benefits are huge in and of themselves. The politics behind the victory are also significant. For the first time ever, the U.S. automakers didn’t wage a massive campaign against tighter fuel economy rules. And when Mitt Romney tried to make the stronger mileage rules a campaign issue, his attack fizzled. This year was the year when patriotic pride in the gas guzzler finally met its end.

Greens scored a major win in January when President Obama announced he was delaying the construction of the Keystone XL pipeline that would have shipped tar sands oil from Alberta, Canada. The president may yet give the project a green light, as he has already done with the southern section of the pipeline. Nevertheless, the decision marked an important victory for the environmental movement. Starting with protests and civil disobedience at the White House gates in late 2011, the Keystone fight showed an environmental movement willing to play political hardball. The (provisional) Keystone victory also demonstrated the potency of trans-partisan organizing as progressives in Nebraska, led by the estimable Jane Kleeb, forged alliances with traditionally conservative ranchers and farmers. The militant stance against Keystone continued throughout 2012 as protesters dogged construction of the southern half of the pipeline with blockades and sit-ins.

2012 was a pretty tough year for people committed to a more sustainable food system. The Farm Bill stalled (though, given its outlines, this was probably a good thing), California’s Proposition 37 was defeated, the Justice Department dropped its Monsanto anti-trust investigation, and, just last week, the feds opened the way for GMO salmon. But here’s an under-the-radar story you might have missed: U.S. meat consumption is starting to decline. According to the U.S. Department of Agriculture, Americans will eat 12 percent less meat in 2012 than we did in 2007. Why? A couple of reasons. The ethical appeal of vegetarianism is one. Rising meat prices are another. A third is health consciousness. Baby Boomers, especially, are cutting back on meat as they get older. The environmental case for reducing meat production and consumption is clear-cut. Americans’ changing eating habits are a win for the environment.

In January, Secretary of the Interior Ken Salazar removed 1 million acres of land around the Grand Canyon from new mining claims for the next 20 years. The decision was a big win for conservation groups that had spent years fighting plans for uranium mining near the canyon. The Grand Canyon decision was just one of several important wilderness protections announced by the Obama Administration this year. In September the president designated Colorado’s Chimney Rock a national monument, and just last week the administration announced the expansion of two marine sanctuaries along the California coast. National environmental groups were especially pleased with Secretary Salazar’s decision to give full wilderness protection to Drakes Estero in Point Reyes National Seashore near San Francisco. (Even though I disagreed with the Drakes Estero decision, there’s no question that it was big news for greens).

The War Against Wolves

When Congress removed the Rocky Mountain gray wolf from the Endangered Species List in 2011 wildlife advocates warned of a blood bath. Sadly, they were right. This last year has seen a brutal campaign against wolves in the West. In March, Earth Island Journal broke the news of a U.S. Forest Service employee in Idaho who had been trapping and hunting wolves. Earlier this month, a much-beloved alpha female was found shot outside the boundaries of Yellowstone National Park. According to the website Howling for Justice, some 700 wolves have been killed in the Rockies since the animal was removed from the Endangered Species List. Given the continuing superstitions against the wolf, I am sorry to say I think this will remain a news story in the year to come.

Among the many geopolitical and enviro-ethical concerns about geoengineering is the worry that some James Bond-like villain—a so-called “Greenfinger”—will just start messing with the atmosphere on his or her own. In 2012 that actually happened. In July a California businessman named Russ George, founder of an outfit called Planktos, dumped 100 tons of iron sulfate into the Pacific Ocean off the coast of British Columbia. The idea was to create an artificial plankton bloom that would absorb carbon dioxide. The experiment worked: Satellite images showed a plankton bloom as large as 10,000 square kilometers. Environmental groups were outraged, pointing out that the experiment likely violated several international conventions. The United Nations’ International Maritime Organization expressed “grave concern” about the experiment. As Naomi Klein, writing in the New York Times, put it: “Geoengineering would give us (or some of us) the power to exile huge swaths of humanity to sacrifice zones with a virtual flip of the switch.” The working debut of geoengineering makes me think that maybe the Mayans were right: 2012 was the end of the world as we know it.

Fill in the Blank
What are some of the 2012 environmental headlines that have had a lasting impact on you? Use the comment field below to share your top picks.