2011 A Huge Year for Public Health 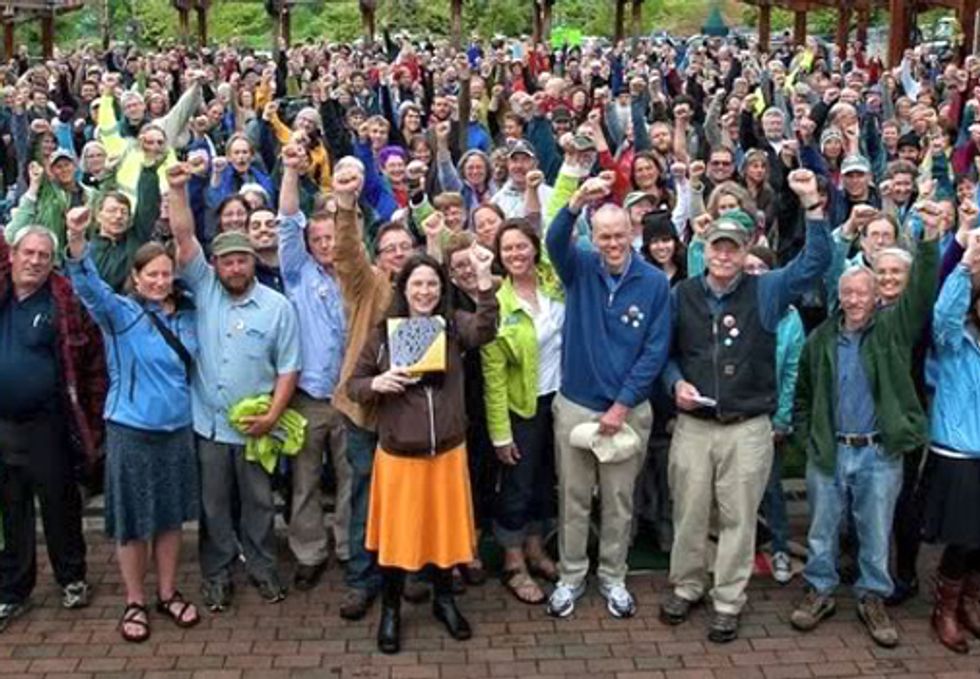 The outlook for coal continued to dim in 2011 as dozens of proposed new coal-fired plants were taken off the drawing board and utilities announced over more than 25,000 megawatts of coal plant retirements this year—and the nation saw record investments in wind and solar. Plant by plant, community by community, citizens joined together this year to show that they aren’t waiting for Washington to move their local communities towards clean sources of energy like wind and solar.

What's more, a game-changing partnership with Bloomberg Philanthropies this year made clear that coal power is on the way out—the $50 million donation will help the Sierra Club move the nation beyond coal, with the goal of retiring a third of the nation's aging coal plants by 2020.

"Coal is a dirty and outdated fuel that is making our kids sick, causing asthma attacks and other health problems," said Mary Anne Hitt, director of the Sierra Club's Beyond Coal Campaign. "2011 was a landmark year where coal's prospects were eclipsed by clean energy—this is the year that investors realized that coal is a losing bet."

"We are clearly witnessing the end of our dependency on coal and because of our successful efforts we are helping to move our nation toward a cleaner energy future that benefits both the public health and the public good," said Michael Bloomberg.

Nationwide, the price of coal is going up, while wind and solar prices are coming down—making new coal plants a poor investment. Citizen opposition, rising costs of coal and increased accountability have stopped 161 proposed coal plants over the past decade. And in the past two years, an unprecedented number of utilities opted to close outdated existing coal plants and pave the way for clean energy innovation.

In Alexandria, Va., a coal plant on the banks of the Potomac river—one that has been polluting the nation's capital for six decades—announced that it would phase out. In San Antonio, community groups heralded the mayor's announcement that the city would replace its coal plant with a massive solar power installation. In Centralia, Washington, a landmark agreement brought together workers and concerned citizens to retire the coal plant and make major new community investments in clean energy. And in the Southeast, an agreement with the Tennessee Valley Authority will phase out 18 units at coal-fired power plants and will invest $350 million in clean air projects.

The end of 2011 also heralded a major victory, as Sierra Club and its allies applauded the U.S. Environmental Protection Agency's (EPA) announcement of new mercury protections, which will require coal plants to install modern pollution control technology. Most of the country's coal plants were built before 1980, and many lack modern pollution controls. As much-needed new guidelines go into effect to protect people from toxic mercury, soot and smog spewing from these outdated coal plants, utilities will need to decide whether they will invest in updating aging plants, or switch to more effective sources of clean power like wind and solar. With wind prices now as low as 3 cents per kilowatt hour in Texas—a third of the price of new coal plants—smart business decisions will increasingly point towards wind power.

Students at Miami University won their campaign in just a single semester with actions including collecting more than 2,000 petitions and hosting an underwear flash mob while students at Ohio University celebrated victory in one of the longest-running and toughest Campuses Beyond Coal campaigns in the heart of coal country.

"Citizens across this country who are frustrated at the lack of leadership in Congress on critical issues of clean air, new jobs and combating global warming are taking action and seeing real results in their local communities, plant by plant, state by state," said Hitt. "The sooner we make the transition off of coal the sooner we can all breathe a little easier."

The Sierra Club Beyond Coal Campaign is a nationwide campaign working to stop the construction of new coal plants, to phase out existing coal plants and replace them with clean energy like wind and solar, and to keep U.S. coal reserves underground and out of world markets. Click here to learn more.