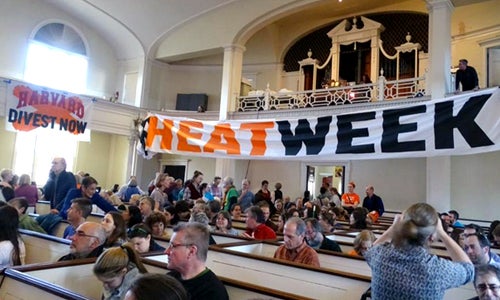 Harvard University will be feeling the heat this week. That’s because April 12-17 was designated “Heat Week” by Divest Harvard, the student-led group which also includes alumni, faculty and friends, demanding that the university divest its $36 billion endowment—the largest of any university in the world—from funds that invest in fossil fuels. 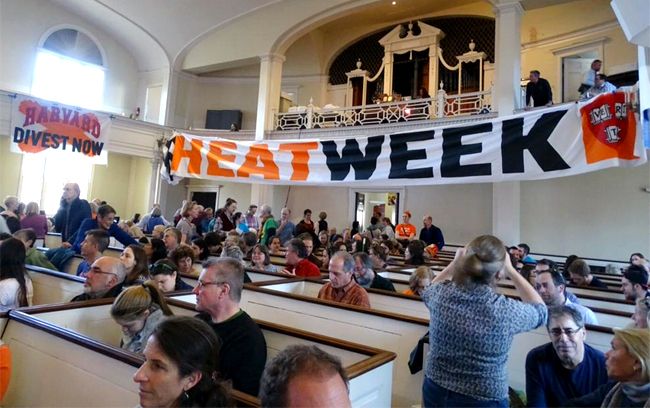 Harvard students and supporters file into First Parish for a rally prior to their Heat Week divestment protest. Photo credit: Divest Harvard

According to the student newspaper the Harvard Crimson, the protest began 7:30 p.m. Sunday when about 200 supporters gathered in front of Massachusetts Hall, an administration building that houses the office of university president Drew Faust. That followed a packed rally at First Parish where speakers addressed the crowd and fired them up to march to Massachusetts Hall.

https://www.youtube.com/watch?t=20&v=JXpRLUnwu6c
is a chance for us to remind Harvard to do more than talk.”

Divest Harvard co-founder Chloe E. Maxmin, class of ’15, said that protestors were ready and willing to be arrested if it came to that. One member of the group was arrested last May for blocking a door at Massachusetts Hall.

Divest Harvard kicked off the week by releasing a statement that said, “Tonight Harvard students, faculty and alumni assembled in peaceful, civil disobedience around Massachusetts Hall to launch Harvard Heat Week—a week of action for fossil fuel divestment. As climate change threatens to become the worst humanitarian crisis that humans have ever faced, we ask all students to join us this week in the movement for climate justice. In this historic moment, Harvard confronts a choice that will influence its legacy for hundreds of years. Will it continue to endorse the fossil fuel industry’s destructive practices? Or will it act to ensure a livable future for young people, future generations, already-marginalized communities, and all those on the frontlines of climate chaos?”

The students from @DivestHarvard blocking Mass Hall introduce themselves to the crowd. Heroes. #harvardheatweek pic.twitter.com/6mYBfvlPZE

The group announced the weeklong “Heat Week” protest in February, following a 24-hour occupation of Massachusetts Hall. It is an escalation of the tactics Divest Harvard has been deploying since it formed in 2012. Faust has dismissed their demands, saying that the university will instead address climate change through research and education. She also refused to hold an open meeting where anyone could ask questions about divestment.

“This direct action comes after two and a half years of interactions with an administration that avoids engagement with student activism at all costs,” Divest Harvard reported in February. “So we began our sit-in in the hopes that we could bring our voices and urgency directly to the doorstop of President Faust. It worked: by mid-morning, she was compelled to respond–a first in our experience with the administration. Yet despite that minor victory, her words made it clear she had no sincere interest in working with us. Instead, she issued an ultimatum that was intended to cut short our direct action, and she called our presence and our passion ‘coercive.’”

“Peaceful protest is absolutely a part of our campus and they have every right to peacefully protest. They don’t have the right to stop university business,” Faust said in March.

“The administration has consistently ostracized Divest Harvard and used ever-changing statements about why they’re not divesting,” Maxmin told the Crimson. “We’re actually not that radical. We’re not insane. We’re genuinely frightened for our futures and truly believe that Harvard is sponsoring some of that fear.”

Speakers throughout the week include:

More than 1,100 Harvard alumni, including notable figures such as Natalie Portman, Cornel West, Al Gore, and Bevis Longstreth, have signed on to a petition urging the administration to divest its fossil fuel holdings, as well as 72 percent of undergraduate students supporting a referendum vote, more than 65,000 community members and more than 245 faculty members calling for divestment, according to Divest Harvard.